A Victorian government department withdrew all of its public servants from hotel quarantine work after the Health Department failed to address fears about health and safety.

Senior Department of Environment, Land, Water and Planning (DELWP) official Kate Gavens pulled her staff out of the hotels in July due to concerns she repeatedly raised with the Department of Health and Human Services about Operation Soteria, the taskforce created to run hotel quarantine.

Revelations about the department revolt, detailed in information submitted to the hotel quarantine inquiry, come as the state's most powerful decision makers get ready to appear in public hearings this week and next. 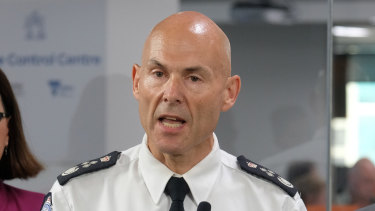 Premier Daniel Andrews has been called to give evidence next Wednesday. Emergency Management Commissioner Andrew Crisp, who oversaw the response to Victoria's most recent bushfires, is listed to appear this Tuesday. Chief Health Officer Brett Sutton, Victoria Police Chief Commissioner Shane Patton and his predecessor, Graham Ashton, will also front the inquiry this week.

About 10 staff from DELWP, along with public servants from other departments including parking inspectors and Parks Victoria rangers, were recruited to work in the hotels as authorised officers, responsible for enforcing the 14-day mandatory quarantine of international arrivals to Melbourne from the end of March.

She said there was no improvement to infection control processes nor communication with staff after an outbreak of COVID-19 in the Rydges on Swanston in late May and no specific training for them on how to do their job, except on how to use an app set up to keep a record of quarantine detainees.

Ms Gavens said there was a lack of oversight of staff contracted to work in the hotels, including security guards who were not wearing protective gear or socially distancing.

Ms Gavens also said testing of quarantined returned travellers and expats was not compulsory and yet they were still allowed out of their rooms for fresh air, "possibly spreading infection".

In an email to a Health Department manager of strategic projects, Ms Gavens wrote: "You were going to follow up today our issues raised in relation to occupational health and safety concerns."

"As discussed, if we are unable to resolve these today, we do need to remove DELWP staff from Operation Soteria deployments until further notice. Can you please confirm that these staff have been removed from roster if we are unable to progress issues today?"

On July 10, Ms Gavens sent a follow-up email, saying: "Until further notice, no other DELWP staff members are available for rostering in [Operation] Soteria."

The Health Department commander who oversaw authorised officers, Murray Smith, told the inquiry last week he did not know why DELWP staff stopped working in the program.

Of the issues raised by Ms Gavens, Mr Smith said: "I would appreciate that they're an interpretation of someone's experience. It doesn't make them that they're correct."

The Age revealed in July more than a dozen DELWP and Parks Victoria public servants were pulled out of the program weeks into their secondment. 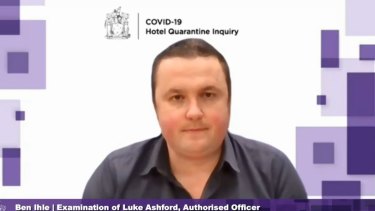 Luke Ashford quit his post as an authorised officer over fears for his health and safety.

Parks Victoria ranger Luke Ashford told the inquiry he quit his post as an authorised officer because he didn't feel safe and was worried about contracting COVID-19 and exposing his family.

"I am used to working in dangerous environments, having worked in firefighting and the military, but I could not rely on the system or people around me to keep the environment safe," Mr Ashford said.

Coronavirus spread from seven quarantined travellers at the Rydges on Swanston and the Stamford Plaza to more than 30 people, mostly security guards, working in the hotels before it was transmitted to their families and friends.

The inquiry has heard some of the guards were not properly trained in infection control, did not use protective gear properly, and did not seem to care about the risk of infection.

Emails from Department of Jobs, Precincts and Regions staff tendered to the inquiry detailed another incident of a guard behaving badly, sacked after he propositioned on a woman quarantined at the Pan Pacific hotel.

The woman said the guard had asked her how many days she had left in quarantine, and when she told him she had five days to go, he said: "Oh that's not good, only five. I wanted to ask you out."

Security footage showed the guard approaching her room and knocking on her door.

The woman "feels very unsafe now at that hotel", the complaint record read.

Genomic and epidemiological experts told the inquiry that 99 per cent of Victoria's current cases could be traced back to cases in hotel quarantine.

Emails from public health officials tendered to the inquiry showed links between the hotel outbreaks to COVID-19 cases in aged care and among families in suburbs of Hallam and Coburg.

Genomics also connected an outbreak stemming from a Melbourne GP who worked at three medical practices with the Coburg family cluster and the Rydges on Swanston outbreak.

09/14/2020 World News Comments Off on Department staff removed from quarantine hotels over safety fears, inquiry told
Recent Posts
We and our partners use cookies on this site to improve our service, perform analytics, personalize advertising, measure advertising performance, and remember website preferences.Ok