Paul Decuir was forced to cut short his diving trip on Saturday after a “curious” great white shark slowly crept out of the murky shadows.

The keen spearfisher was diving for red snapper and grouper off the coast of Orange Beach in Alabama, US, when he spotted the “big-teethed” predator drawing closer.

Haunting footage of the incident reveals the moment the giant appeared out of nowhere moments before Paul was about to nab a red snapper.

The man, who was diving with his friend David, spots the creature’s shadow almost immediately.

He quickly alerts David, who has his back towards the predator.

Paul said: “You can’t see it in the video but this guy had some big teeth.

“Needless to say David and I decided to cut the dive short and head back to the boat.”

Since uploading the video only days ago, some 150,000 people have swum in to watch the nail-biting moment. 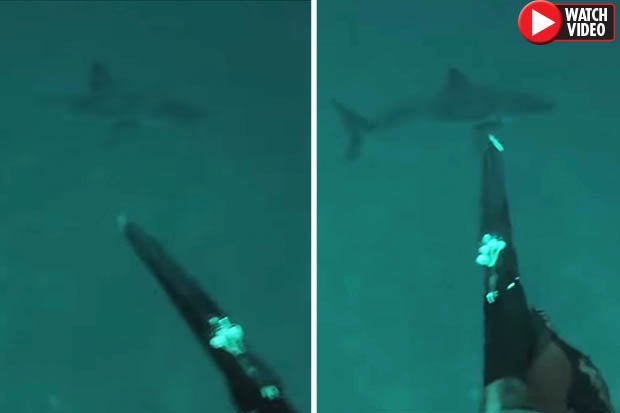 One viewer commented: “Well, that will make the poo come out.”

Another added: “Beautiful shark. I haven’t been in the water with a white, but they don’t seem nearly as aggressive as the bulls or mako.”

Paul agreed, revealing that bull sharks had “given him trouble in the past”.

“This guy was just curious,” he added.

It comes after a great white breached the water only metres from a diving cage.