The world record for the largest underwater cleanup was broken over the weekend by 633 divers in South Florida.

The divers scooped up trash from the ocean floor Saturday near a fishing pier at Deerfield Beach, the Sun-Sentinel reported. The newspaper added that the divers had to be in the water for at least 15 minutes to be counted as part of the effort.

"I actually stood there and clicked off everyone as they got in the water," Guinness World Record adjudicator Michael Empric told the paper. 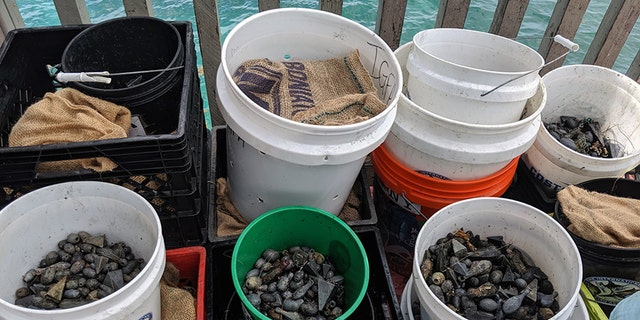 Some of the fishing weights recovered during Saturday’s cleanup.
(Jack Fishman/Project AWARE)

RJ Harper, who helped recruit divers for the cleanup, told the Sun-Sentinel that divers recovered 1,600 pounds of lead fishing weights alone. The total amount of trash collected was not immediately known.

"All those times the line gets caught, you just never really think about it," he said. "Obviously, trash was collected, but the beauty of it is with 633 divers, we were able to do a very thorough cleaning."

The previous record was set in 2015 when former Egyptian Army scuba diver Ahmed Gabr and 614 others cleaned up part of the Red Sea.

Information on the collected refuse is to be submitted to a database run by the marine conservation non-profit Project AWARE in order to guide potential policy changes.