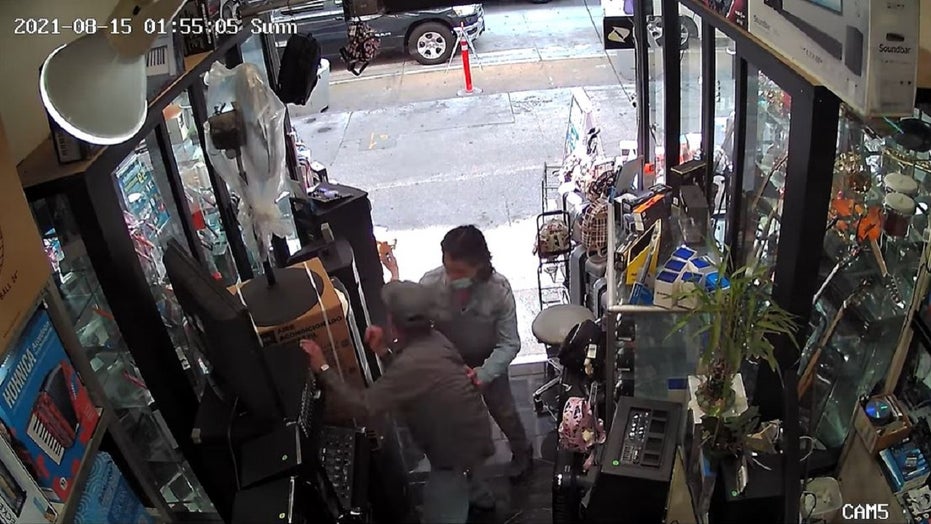 Authorities are searching for a man captured on surveillance footage stabbing someone in a downtown Los Angeles shop in an unprovoked attack earlier this month, officials said this week.

The security video released Tuesday by the Los Angeles Police Department shows a man wearing a mask approaching another man inside a business on the busy South Broadway corridor at 11:20 a.m. on Aug. 14.

The suspect reached into his pocket and pulls out what appears to be a knife as he walks to the victim, who is watching TV. He then appears to stab him at least two times in the torso before walking off.

The victim was taken to a hospital where he was treated and released. Details about his injuries were not disclosed.

The attacker is being sought as part of an assault with a deadly weapon investigation.  He was described as 30 and 35 years old, about 5 feet, 8 inches tall and weighing about 165 pounds, police said.

Like many cities, violent crime has increased in 2021 compared to last year.

As of Aug. 21, the LAPD reported 246 murders, compared to 199 in the same time frame last year, according to police data. Aggravated assaults were up 11% while rapes and robberies were down.