I see your Katana, and I raise you! Moment road rage driver pulls Samurai SWORD on VERY COOL motorist who then pulls RIFLE out of his trunk in crazy Portland stand-off

This is the dramatic moment a driver wields a sword at another motorist during a road rage stand-off in Oregon – only for the man he threatens to calmly pop his trunk and pull out a huge rifle in return.

A video of the confrontation, uploaded to Twitter this week, shows a man brandishing the samurai-like weapon while running towards the other driver as he is getting out of his car.

The hair-raising encounter was recorded in crime-ravaged Portland – where shootings and murders are soaring after the city’s police department saw its budget cut by $15million last year as part of the woke city council’s new defunding plan following the death of George Floyd.

In the clip, a man donning a dark baseball cap and glasses can be seen raising the sword behind his head and repeatedly stepping towards the other motorist, who is dressed in a plaid shirt and jeans. 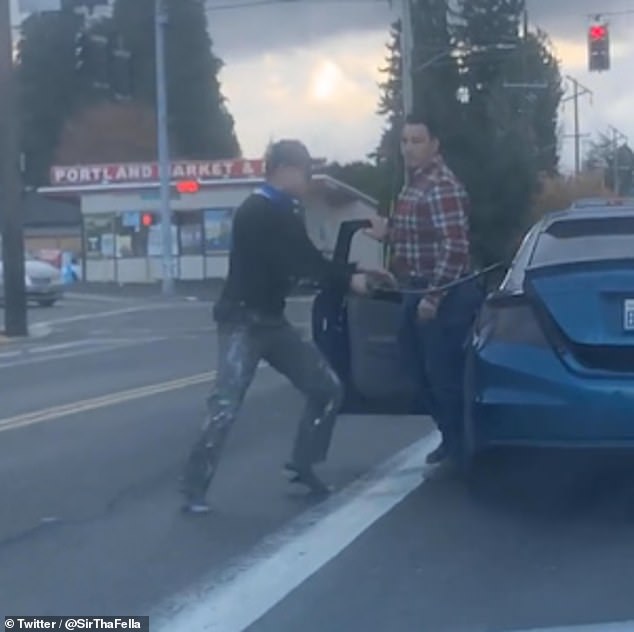 A video of the confrontation was uploaded to Reddit this week and shows a man brandishing the samurai-like weapon by a traffic stop in crime-ravaged Portland, Oregon (Pictured: The man with the sword threatens another motorist as he calmly exits his vehicle) 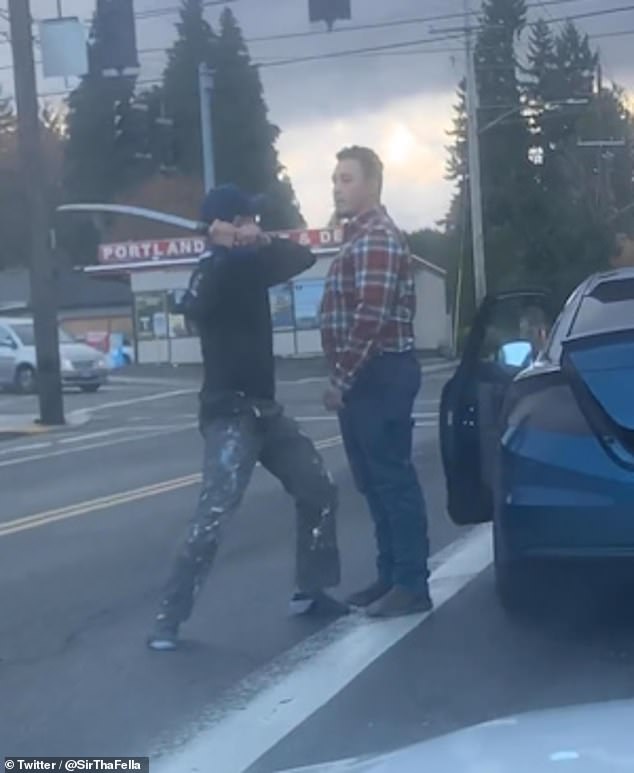 The unnamed man donning a dark baseball cap and glasses raises the sword behind his head before he repeatedly steps towards the other motorist, who is dressed in a plaid shirt and jeans 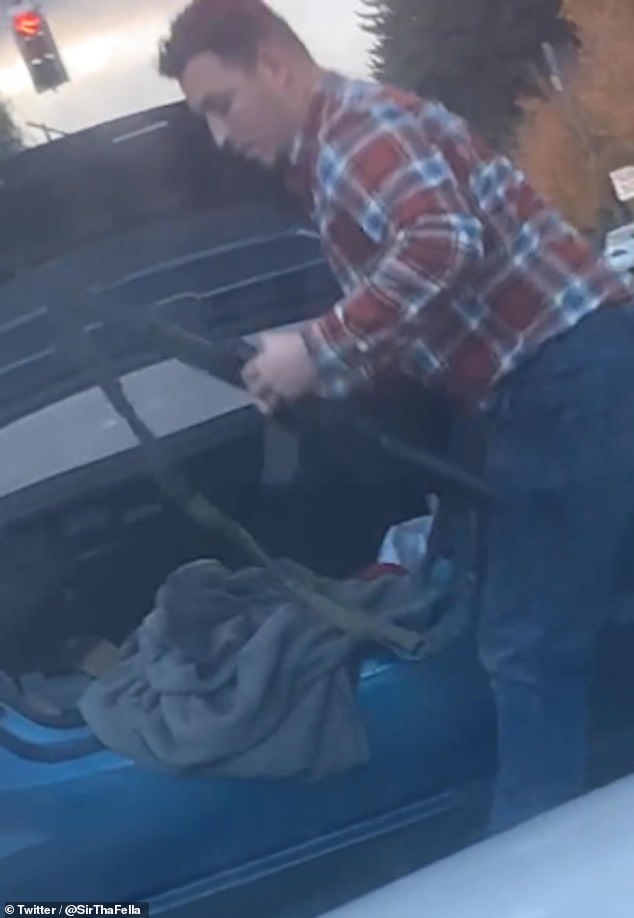 As the man with the sword returns to his vehicle, the driver he was threatening calmly walks to his boot and retrieves a large rifle – which social media users speculated was an AK15

The would-be victim, however, stands calmly next to his vehicle with his arms by his side, seemingly unfazed by the threat.

The man recording the stand-off from inside his car can then be heard saying: ‘Beat his a**!’, as the two appear to exchange heated words.

The man with the sword then runs back to his car, during which time the other motorist opens his trunk and pulls out a large rifle.

As he searches the back of his vehicle for the weapon, the man filming says: ‘Oh, what’s he gonna get?’, before seeing him pull out the gun and adding: ‘Oh, s**t’.

He then puts his phone in his lap and immediately stops filming the pair.

It is not know what kind of gun was pulled from the car but social media users speculated it was an AK15.

The shocking encounter comes the same week it was revealed that Portland’s police department has just 788 sworn cops – the lowest number since 1989, when the city’s population was 35 per cent lower.

Worrying new official statistics show that the smaller number of officers must try and police the city’s 662,549 residents, meaning there are just 1.2 cops for every 1,000 people.

The last time there were such low numbers was in 1989, when just 742 cops patrolled the city’s streets.

But back then, just 430,657 lived in the Oregon city, meaning the department wasn’t as overstretched as it is now.

The short-staffed department was defunded to the tune of $15 million in June 2020, in the wake of George Floyd’s murder.

Exit surveys conducted by KOIN earlier this year found that Portland cops were leaving the force because they feel demoralized and have no faith in the city’s DA or mayor.

Portland has also been hit by a number of laws and measures aimed at reducing its ability to intervene in crime, even as Portland sees murders soar to an all time high.

There have been 77 homicides in the city so far this year, far eclipsing the previous record of 67 for the whole of 1987, with six weeks of 2021 still to run.

Portland has also witnessed 1,105 shootings this year, with Mayor Ted Wheeler now calling for more cash to be available to increase the size of its police department.

The city’s union has called for officer numbers to be doubled, although they’ve also warned it could be years before any planned hires impact current crime levels.

Most residents believe there must be more boots on the ground and 66 per cent said Portland needs more officers, according to a poll from People for Portland.