The animals were trapped when the River Dee burst its banks near Chester Meadows following days of heavy rain.

Frantic residents living nearby feared the horses had drowned until a neighbour’s drone showed their heads bobbing inches above the rising water.

It came as the the city of Chester was put on a flood alert and the Dee peaked at almost 33 feet deep.

They spotted Jeff Polton, 45, who was on his paddleboard nearby who said he would try and help the stricken animals which were trapped behind a locked gate. 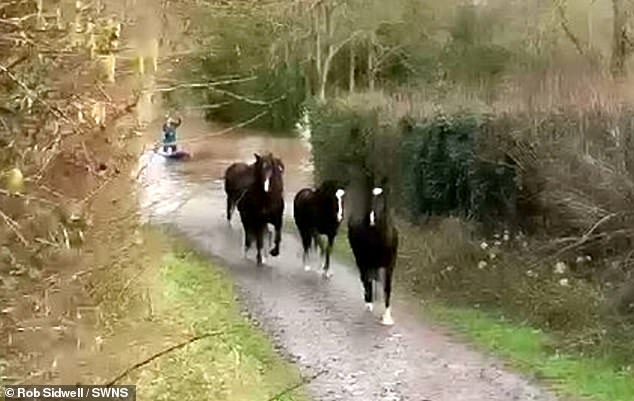 Footage shows the dramatic race against time as Jeff desperately tried to open the gate before the horses became completely submerged.

After 40 minutes he finally managed to slice off a chain securing the gate with a pair of bolt cutters before prising it open to allow the terrified animals to escape.

It is understood the meadows, which is a flood plain, became flooded in a matter of hours last Friday.

Rob Sidwell, 51, who filmed the rescue, said: ‘I was concerned about the horses and drove round to the other side of the river where from 20 metres away (66ft) I could see the horses standing there in shoulder-high water.

‘Another neighbour had been searching for them with his drone and we met up once we had located them. 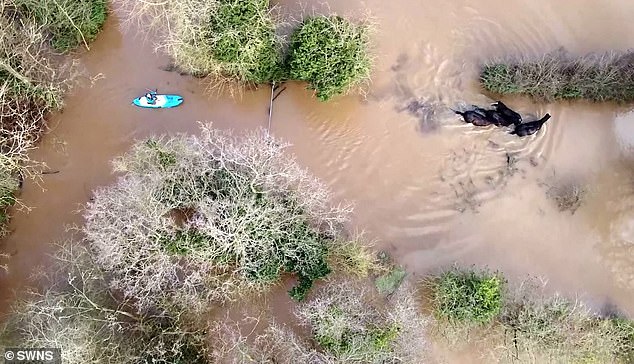 Jeff Polton, 45, was on his paddleboard nearby when frantic residents asked him if he would try and help the stricken animals which were trapped behind a locked gate

‘I had been preparing myself to swim out 100 metres (330ft) to open the gate to let the horses out.

‘Luckily we saw a paddleboarder who had come down to the field with his family.

‘We asked him if instead of paddling he could take a key out to open the gate. We commandeered him and he was happy to oblige and help out.

‘We couldn’t see the horses from where we were standing, having moved to the other bank, so we showed him what the drone was seeing.

‘He paddled out through the water which was 5ft deep and we could see him approach the gate.

‘It was almost totally submerged and the horses were 10 metres (33ft) behind it. 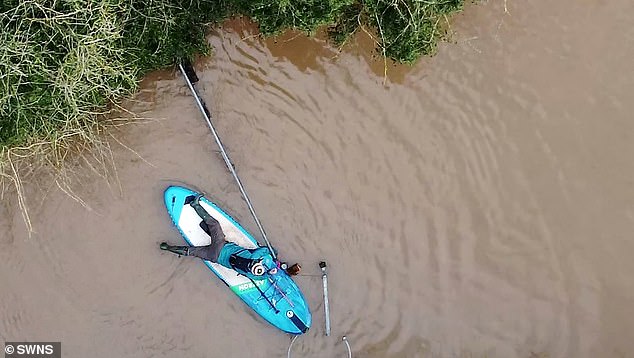 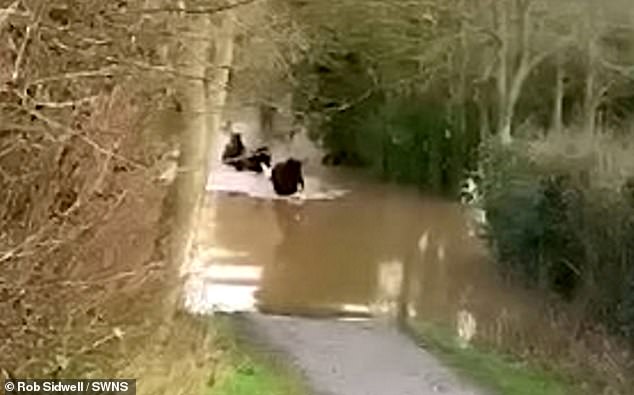 The horses, which had been in the freezing water for seven hours, followed Jeff to dry land.

‘On the first attempt he couldn’t use the key under water, so he came back and we sent him out with a set of bolt cutters.’

After 40 agonising minutes the horses, which had been in the freezing water for seven hours, followed Jeff to dry land.

Rob, a construction worker, added: ‘It would’ve been curtains for them if he hadn’t opened the gate.

‘They looked fine but very cold and they ran into a field and started grazing on grass immediately.

‘They are healthy and strong horses but pneumonia can’t have been far off. 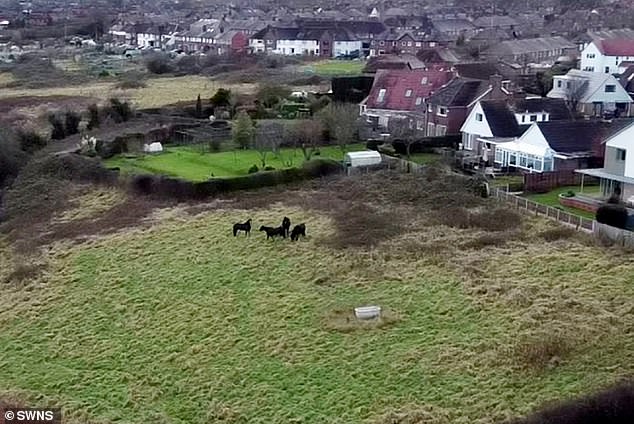 Rob, a construction worker who watched the rescue, said: ‘It would’ve been curtains for them if he hadn’t opened the gate. They looked fine but very cold and they ran into a field and started grazing on grass immediately’

‘You can now see where they’d been biting the gatepost trying to get through. It was a wonderful feeling when they ran back onto dry land.’

The Environment Agency placed Chester and Whitchurch under a flood alert last Friday, following persistent overnight rain as a result of Storm Christoph.

They had warned of possible flooding affecting the River Dee’s catchment area over the weekend, with water levels estimated to have reached almost 33ft, seven feet higher than the usual maximum.

Other parts of the country including Nottinghamshire and Derbyshire also suffered serious flooding, with hundreds of people having to be evacuated from their homes.

The Met Office is now warning that snow could return to Scotland, Oxfordshire and Gloucestershire in the coming days.