LGBT and human rights activists celebrate the ruling, which will pave the way for more rights for same-sex couples. 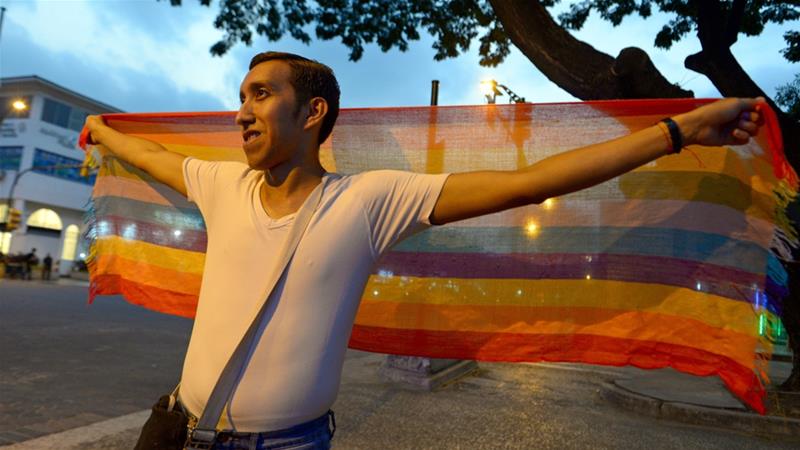 Ecuador’s highest court has approved same-sex marriage in a landmark ruling in the small and traditionally Catholic country.

The Constitutional Court said on Wednesday that same-sex marriage had been approved in a five-to-four vote of its nine judges in a closed-door hearing.

LGBT and human rights activists celebrated the decision in the capital, Quito, and the port city of Guayaquil, waving the rainbow flag of the gay rights movement.

With the ruling, Ecuador joins other South American countries such as Argentina, Brazil, Colombia and Uruguay in recognising same-sex marriage.

“It means Ecuador is more egalitarian,” lawyer Christian Paula of the Patka Foundation, which provides legal advice for same-sex couples looking to marry in the country, said.

“It recognises that human rights must be for all people without discrimination.”

The decision came as the court ruled on lawsuits by two male couples who wanted to wed.

Speaking to reporters in Quito, one of the men, Efrain Soria, urged others to stop hiding and “enjoy the happiness that comes from being equal, like anyone else”.

Soria, who is also the president of the Ecuadorian Equality Foundation, an LGBT rights group, said the ruling is “a joy for our entire community and for Ecuador”.

The four dissenting judges in Wednesday’s ruling argued that in order to recognise same-sex marriage, constitutional reform would have to be debated in the National Assembly.

Ecuador’s current constitution defines marriage as the union between a man and a woman. The charter, which was ratified in 2008, also bars same-sex couples from adopting children.

However, the judges that approved same-sex marriage said they based their decision on the idea that all people are equal and said they wanted to counter any kind of discrimination.

Ecuador has recognised de-facto civil unions for same-sex couples for years, but civil partners enjoy fewer rights than married couples when it comes to inheritance and estate laws.

In the ruling, the judges instructed Congress to pass legislation ensuring equal treatment for all under the country’s marriage law.

A decision by the Inter-American Court on Human Rights affirming that countries should allow same-sex couples the right to marry paved the way for the case.

The ruling comes as people around the world are celebrating Pride Month and commemorating the 50th anniversary of the Stonewall riots in the United States, which prompted the gay rights movement.