Egyptian doctor, 34, is ‘beaten and thrown to her death from sixth floor balcony by her landlord, doorman and neighbour in honour killing for inviting a male colleague to her flat’

A female doctor has been beaten and thrown to her death from her apartment in Egypt in a so-called honour killing after she invited a male colleague back to the flat.

The 34-year-old, who has not been publicly identified, plunged to her death from her apartment balcony in Cairo two weeks ago, local media reported.

Three men – her landlord, doorman and neighbour – have now been arrested amid an investigation into her death.

The trio are accused of breaking into the apartment and beating her because she had spent time alone with a male colleague. 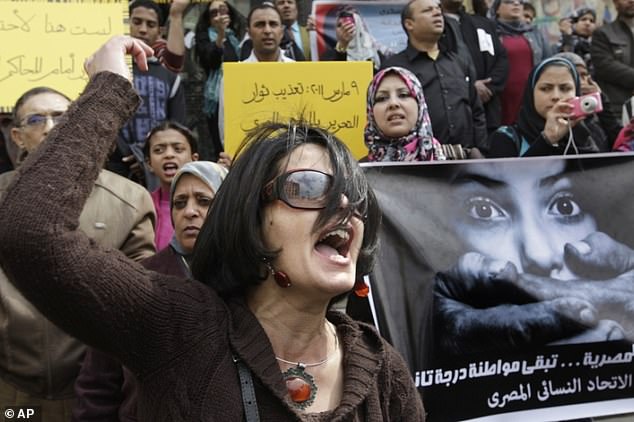 Strict social codes in Egypt mean it is considered deeply shameful for a woman to be alone with an unrelated man, though the law does not expressly forbid it.

The men have not yet been charged, according to The New Arab, as police continue to investigate the case.

Reports of the attack vary, with some saying the woman was pushed to her death while others say she fell while being attacked.

The landlord has reportedly denied all wrongdoing, saying the woman killed herself during a ‘psychological crisis’.

Women’s rights activists have called for the men to be punished, and condemned ongoing discrimination against women in Egypt.

The killing comes just weeks after Egyptian politicians put forward a series of new laws that would curtail the rights of women, sparking outrage.

The proposed laws – amendments to the country’s Personal Status Law – would mean women are unable to sign marriage contracts, and that a male relative must approve of their match before it can become legal.

Men would also be able to annul a marriage without consulting their wives, would be given priority over women in terms of child custody.

Men would have the sole right to register a child’s birth, obtain identity documents for them, and choose their education.

The law would also give men the power to stop women from travelling without their permission, even if for work.

Activists condemned the bill, which they said takes the country back ‘200 years.’

UN figures compiled in 2013 found that 99 per cent of women in Egypt had suffered some form of sexual harassment, while nearly half experienced domestic violence.

Egyptian laws do not explicitly criminalize domestic violence or martial rape, meaning that women who report such crimes are often ignored, the report added.