Is there no love lost between BBC titans Huw Edwards and David Dimbleby?

Describing Huw as a ‘lesser animal’, David recalls one election night when a TV floor manager told Edwards: ‘Move up, David is here.’

‘He looked furious,’ Dimbleby tells a podcast. ‘When I was being taken off early in the morning, it was Huw coming on and I was furious as I was not able to say good night or good morning at the end. I just had to be shuffled off.’

He adds: ‘You don’t trust the stars as they want your job. Why should you trust them?’ 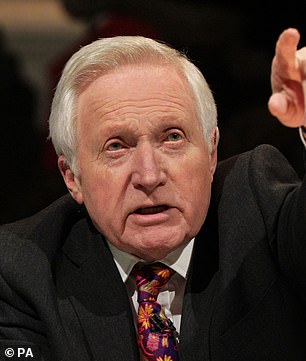 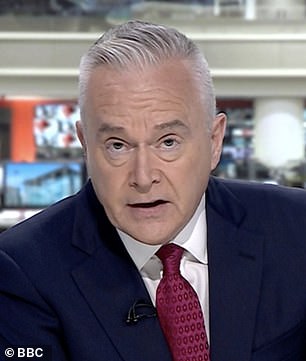 EPHRAIM HARDCASTLE: Is there no love lost between BBC titans Huw Edwards and David Dimbleby?

Historian Simon Sebag Montefiore compares ‘Spare To The Heir’ Harry with the younger sons of ancient dynasties murdered by their relatives.

‘Ottoman sultans had their rebellious sons strangled with a bow string by deaf mutes; Mongol khans trampled their spares under horses’ hoofs.’

Adds Montefiore: ‘So a sumptuous LA mansion and a few Spotify deals is pretty attractive in comparison.’

Gavin Williamson, one of more than 700 privy counsellors, throws his toys out of his pram for not getting an invitation to the Queen’s funeral.

Would he have dared sending boorish emails to Lord President of the Council Penny Mordaunt?

She limited attendance at King Charles’s accession council to just 194 people – and Williamson wasn’t on that list either.

Lord Lucan hunter, the late journalist Harry Arnold, recalled the Fleet Street editors’ lunch held a year after his lordship’s disappearance and Harry and chums fruitlessly seeking him in Australia, Botswana and the Caribbean.

‘Someone at the lunch said ‘Funny he’s never been sighted in Accrington or Grimsby, isn’t it?’ recalled Harry.

‘As a result, the tour of sunny climes was brought to a halt.’

Might Dame Judi Dench regret describing The Crown as ‘crude sensationalism’ after Netflix historical adviser Robert Lacey took an ungallant swipe at her.

‘How the British love to bow and scrape. ‘Crude sensationalism’ is the term one might apply to Dench’s screen depiction of Queen Victoria in Mrs Brown, based on the scurrilous rumours that the widowed queen enjoyed an improper relationship with her Scottish gillie John Brown.’ Isn’t life grand?

On the eve of his Netflix debut as Charles in The Crown, Dominic West tells the New York Times: ‘I was obsessed with Diana. Still am. I remember planning with two friends to try… and camp to see her.’

Maybe if smitten Dom had phoned ahead she’d have arranged a convenient car boot to smuggle him in?