California professor and ex-CIA staffer claims that ‘Christian, white men’ are primed to start a civil war in America because they ‘were once dominant and are in decline’ – and blames the right for spike in violent extremism

Barbara F. Walter, author of the 2022 book How Civil War Starts, made her inflammatory comments on PBS Tuesday evening while speaking with anchor Hari Sreenivasan.

Walter’s remarks come just days before the midterm elections, which the left and right alike have been characterizing as a battle over democracy itself.

Sreenivasan asked Walter – who said she studied foreign nations on the brink of civil war for the CIA – how far off a war within the US could be.

Walter then went on to explain the past ‘100 years’ showed that civil wars are typically started along divided religious and ethnic lines, when a previously dominant group begins to see their position wane.

She then went on to say that ‘white men’ who ‘also tended to be Christian,’ were beginning to see such a decline in their position in the US, and that they had ‘almost exclusively’ been the perpetrators of violent extremism in the country since 2008.

Walter is a professor of pacific international relations at the University of California San Diego. She describes herself as ‘one of the world’s leading experts on civil wars, political violence, and terrorism’ on her website.

Her latest book claims that ‘healthy democracies’ tend to be safe from civil wars, but suggests the US is becoming increasingly unstable. Walter’s website calls her book ‘urgent and disturbing,’ and says it is about identifying the signs of a civil war in the US in the hopes of avoiding one. 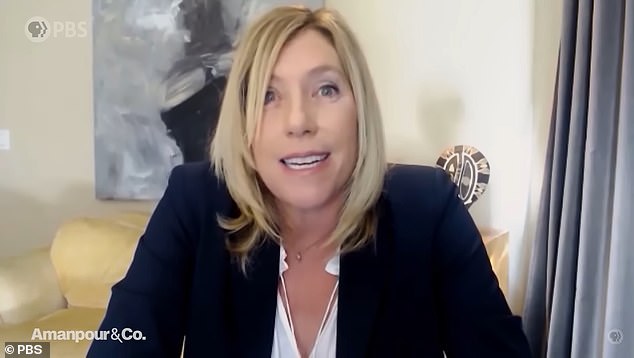 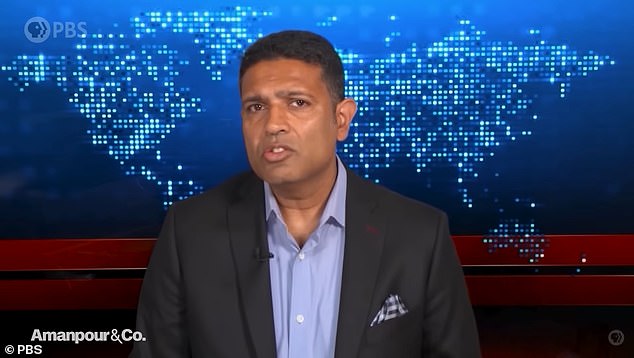 Walter made her inflammatory comments on PBS Tuesday evening while speaking with anchor Hari Sreenivasan.

Walter explained her credentials before launching into her lecture, telling Sreenivasan she worked for a ‘US government task force that was run through the CIA, that was designed to help our government predict where around the world civil wars and political instability, and political unrest was likely to break out.’

She said the CIA – which she noted was ‘not a politicized organization’ – very clearly understands what tends to cause civil wars, then explained that she thinks the US is currently facing similar problems.

‘We know very clearly that the two big risk factors are whether a country has a weak and partial democracy, and whether in those countries its political parties had divided along racial, religious, and or ethnic lines.’ 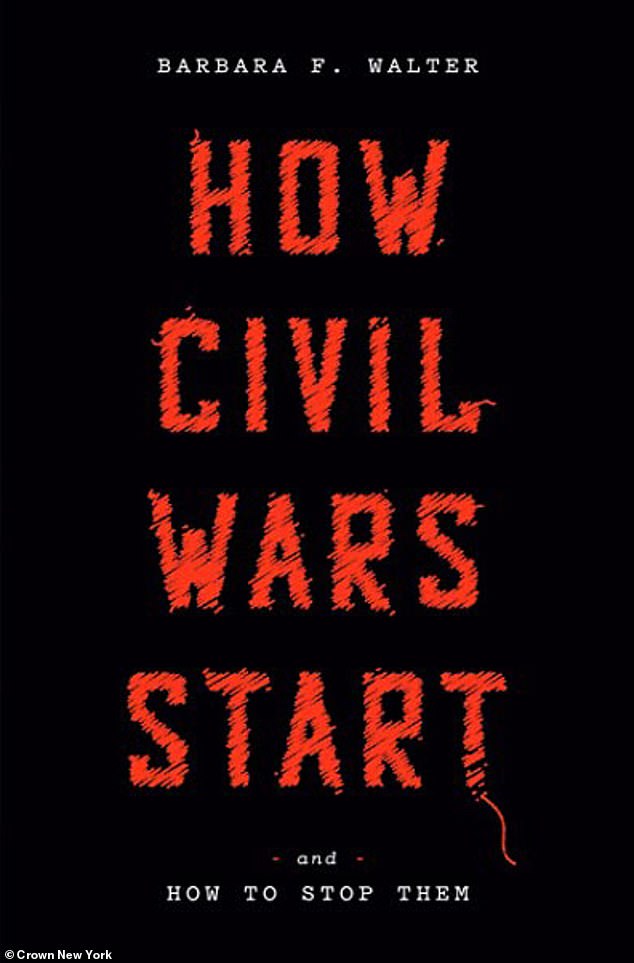 Walter’s 2022 book, How Civil Wars Start, claims that ‘healthy democracies’ tend to be safe from civil wars, but suggests the US is becoming increasingly unstable 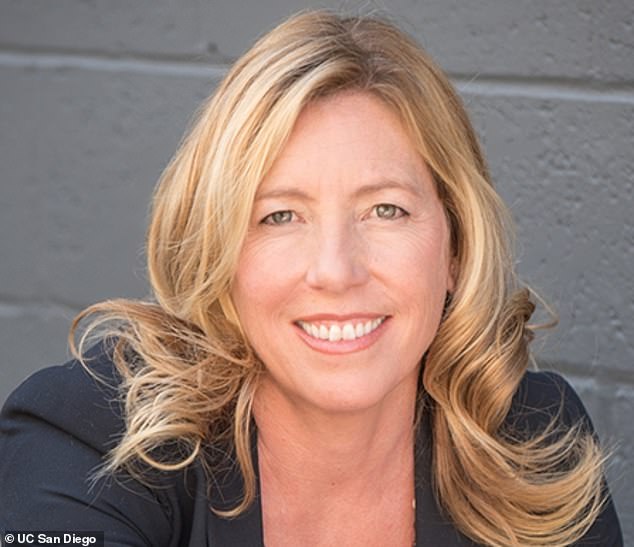 Walter is a professor of pacific international relations at the University of California San Diego. She describes herself as ‘one of the world’s leading experts on civil wars, political violence, and terrorism’

Walter then explained that she felt white Christian men felt their power was waning, and had been behind extremist violence in the US for the past 14 years.

‘We’ve seen a significant rise in violent extremism since 2008,’ she said. ‘Some of it’s been on the left, but the vast majority of it has been on the far-right. And it’s been perpetrated almost exclusively by White men.’

‘And again, if you look at the history of the United States, the group that had been dominant since the very inception of our country were white men. They also tended to be Christian, and they are losing that position.’

She then said that white Christian men’s notion that they are the ‘true identity’ of the nation, and a fear over losing that ownership, was driving the nation towards violent war.

‘You see a subset of this population becoming increasingly resentful, angry, and they truly feel that this is their country,’ she said. ‘And that they’re being patriots by saving what they believe is the true identity of this country and they’re willing to use violence to do it.’ 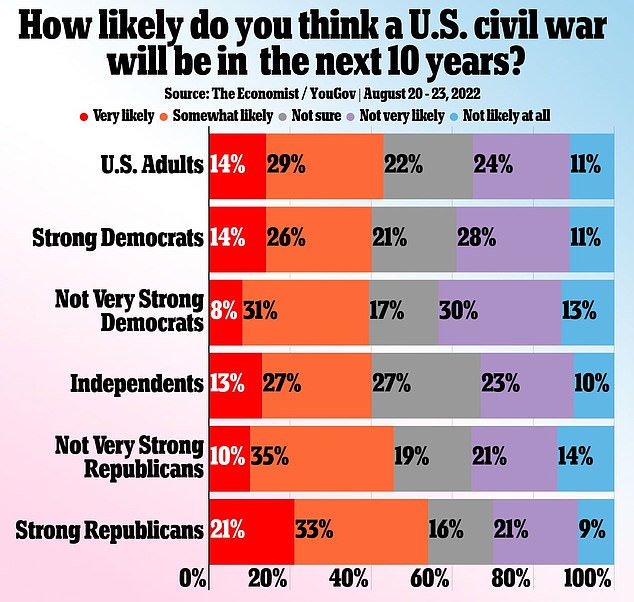 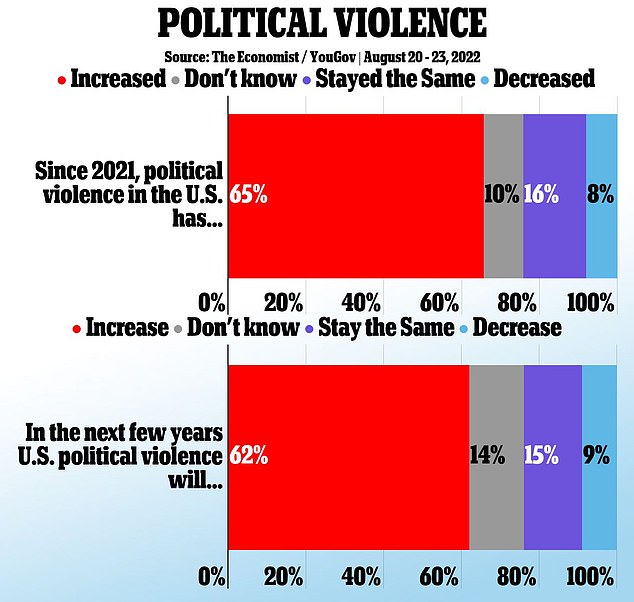 Walter’s comments come as speculation over whether the US is headed for civil war has increased in in the fallout of the January 6 attack on the US Capitol, and as rhetoric from democrats and republicans has increasingly characterized the other side as threats to the very foundation of the country.

An August poll found that over 40 percent of Americans believe the country is headed toward civil war within the next 10 years, while nearly everyone believes political divisions have gotten worse since the start of 2021.

Forty-three percent of adults overall believe the nation will fight a civil war within the next 10 years, 35 percent believe civil war is not very likely or not at all likely, while 22 percent responded ‘not sure,’ according to a new Economist-YouGov poll.

Fourteen percent of ‘strong Democrats’ responded that civil war within the decade was ‘very likely’ while 26 percent said it was somewhat likely.

Sixty-six percent of Americans believe political violence has increased since the start of 2021 while 17 percent believe it has stayed the same and eight percent think it has decreased.

Republicans are more likely than Democrats to say the nation has become more politically divided – 79 percent to 59 percent. 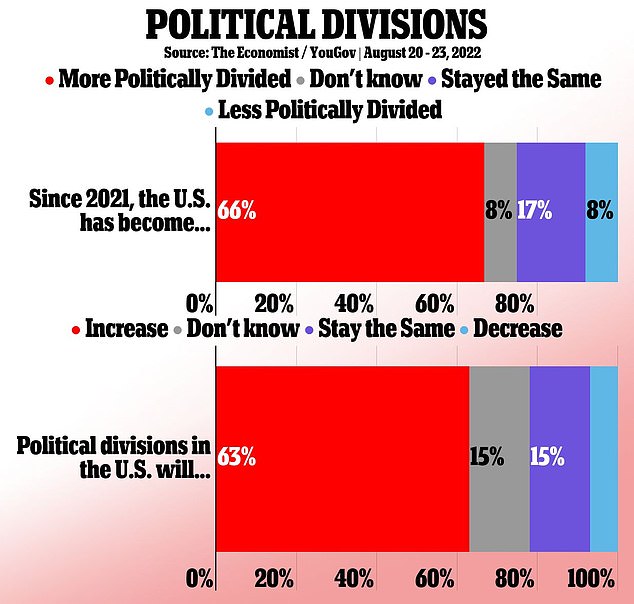