One New Hampshire family’s gender reveal party was such a blast that it rattled towns, set off reports of an earthquake, and could be heard from across the state line, police said.

Police in Kingston, a town not far from the Massachusetts border, received reports of a loud explosion on Tuesday evening. They responded to Torromeo quarry where they found people who admitted holding a gender reveal party with explosives.

The source was Tannerite — 36 kilograms of it, police said. The family thought the quarry would be the safest spot to blow up the explosive, which is typically sold over the counter as a target for firearms practice, police said. 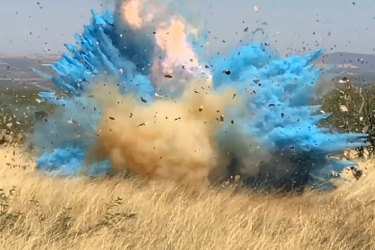 A gender reveal event in the Santa Rita Mountain’s foothills, in Arizona, in 2017 ignited a bushfire.Credit:US Forest Service/AP

No injuries were reported, Kingston Police Chief Donald Briggs Jr. told the Union Leader, but the blast frightened neighbours, left nearby homes with cracks on their walls and appeared to turn the local tap water brown.

“We are all about celebrating happy moments like having a baby, but their celebration was felt and heard not only by different neighbourhoods but through different towns,” Sara Taglieri, 41, told The Washington Post.

“It’s not like we are upset because there was blue or pink confetti on our yard. It was such a large blast.”

Police said that the unidentified man who purchased and ignited the explosives had turned himself in and was cooperating with authorities. The incident remains under investigation and no charges have been filed, police told the Union Leader.

“We heard this god-awful blast,” Sara Taglieri, who lives in a home that abuts the quarry, told the television station. “It knocked pictures off our walls … I’m all up for silliness and what not, but that was extreme.”

Taglieri’s husband, Matt, said that neighbours reported cracks in the foundation of their homes.

This year, at least two gender-reveal incidents have turned fatal. In February, a 28-year-old father-to-be died after the homemade device he was preparing for his gender-reveal celebration in New York malfunctioned inside his garage.

Last month, a small aircraft hired to release a pink cloud for a gender-reveal gathering in Cancún nosedived into a lagoon, killing the pilot and the co-pilot.