The outgoing US President posted a video calling on pro-Trump supporters to “go home now” from the Capitol Building in Washington DC after the group broke into the state building during the certification of the election results. But Mr Trump also continued to promote his claims the election was “stolen” in the video, and added the protesters were “very special”.

Facebook removed the President’s video from the website shortly after it was uploaded, over fears it “contributes to ongoing violence”.


Guy Rosen, vice-president of Integrity at Facebook, tweeted out an explanation for the video’s removal.


He said: “This is an emergency situation and we are taking appropriate emergency measures, including removing President Trump’s video.


“We removed it because on balance we believe it contributes to rather than diminishes the risk of ongoing violence.” 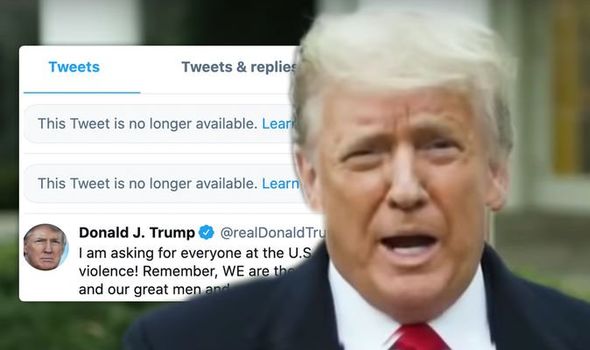 Youtube has also removed the President’s message to his supporters, claiming it breached its community guidelines.

The Verge reported that while Mr Trump’s video will be removed, other channels will be able to feature it in an “educational” or informative context.

Mr Trump said during the video, repeating his claims of election fraud: “We had an election that was stolen from us.

“It was a landslide election and everyone knows it, especially the other side.”

Twitter has now removed Mr Trump’s video, but had placed warning on his posts against election fraud.

Posts from the President about the protests are also blocked from being liked and shared beyond quote tweets.

A warning on the video message reads: “This claim of election fraud is disputed, and this tweet can’t be replied to, Retweeted, or liked due to a risk of violence.”

Social media companies have already taken huge steps during the US election to curb misinformation.

01/06/2021 World News Comments Off on Facebook PULLS Trump’s ‘go home’ video to protesters over ‘ongoing violence’ risk
Recent Posts
We and our partners use cookies on this site to improve our service, perform analytics, personalize advertising, measure advertising performance, and remember website preferences.Ok