Washington: The FBI is warning of plans for armed protests at all 50 state capitals and in Washington DC in the days leading up to US President-election Joe Biden's inauguration, stoking fears of more bloodshed after last week's deadly siege at the Capitol.

An internal FBI bulletin warned that, as of Sunday, the nationwide protests may start later this week and extend through Biden’s January 20 inauguration, according to two law enforcement officials who read details of the memo to The Associated Press. Investigators believe some of the people are members of some extremist groups, the officials said. The bulletin was first reported by the American ABC. 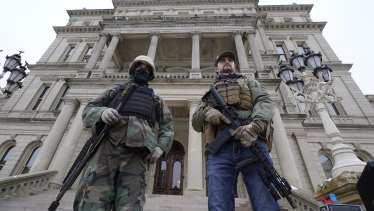 Armed men stand on the steps at the State Capitol after a rally in support of President Donald Trump in Lansing, Michigan, on the same day as the US Capitol in Washington was attacked.Credit:AP

“Armed protests are being planned at all 50 state capitols from 16 January through at least 20 January, and at the US Capitol from 17 January through 20 January,” the bulletin said, according to one official. The officials were not authorised to speak publicly and spoke to the AP on condition of anonymity.

The FBI issued at least one other bulletin — they go out to law enforcement nationwide on the topic — before the riots last week. On December 29, it warned of the potential for armed demonstrators targeting legislatures, the second official said.

Army General Daniel Hokanson, chief of the National Guard Bureau, told reporters on Monday, US time, that the Guard is also looking at any issues across the country. 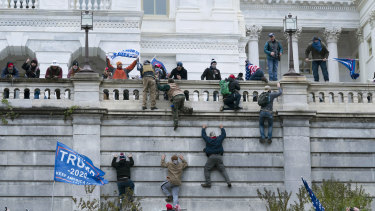 Trump supporters scaling the wall of the US Capitol. The attack on the Capitol resulted in the death of five people.Credit:AP

“We’re keeping a look across the entire country to make sure that we’re monitoring, and that our Guards in every state are in close coordination with their local law enforcement agencies to provide any support requested.”

He said up to 15,000 National Guard members could be deployed in Washington during the presidential inauguration.

About 6000 guardsmen from six states already were in the nation’s capital, and that the military response would expand to about 10,000 by the weekend, he said.

The National Guard would bring their weapons to Washington and carry them based on discussions with the FBI, police and other agencies.

“Obviously, we’re very concerned that we want our individuals to have the right to self-defence," the general said. “And so, that will be an ongoing conversation, and if the senior leadership determines that that’s the right posture to be in, then that is something that we will do.”

The riots followed weeks of online calls for violence in Washington in the waning days of Donald Trump's presidency.

A tweet in which Trump promised that last Wednesday's event “will be wild” fuelled a “month-long frenzy of incitements, strategizing, and embrace of violence against lawmakers,” according to a research group that tracks online extremism activity. In a report issued on Saturday, the SITE Intelligence Group also warns that the Capitol attack has emboldened Trump-supporting extremists.

“No matter how all this plays out, it's only the beginning,” posted a user on TheDonald message board, according to the report.

US power and politics

Understand the election result and its aftermath with expert analysis from US correspondent Matthew Knott. Sign up here.

01/11/2021 World News Comments Off on FBI warns of plans for armed protests around US next week
Recent Posts
We and our partners use cookies on this site to improve our service, perform analytics, personalize advertising, measure advertising performance, and remember website preferences.Ok