Washington: One day he was in a war-torn city in the contested Ukraine region of Bakhmut defending his people against Vladimir Putin’s brutal war.

The next, President Volodymyr Zelensky was in the US Congress, treated as a war hero and with America’s two most powerful women – Vice President Kamala Harris and departing House Speaker Nancy Pelosi – waving behind him his gift of a Ukrainian flag, signed by Bakhmut’s courageous soldiers. 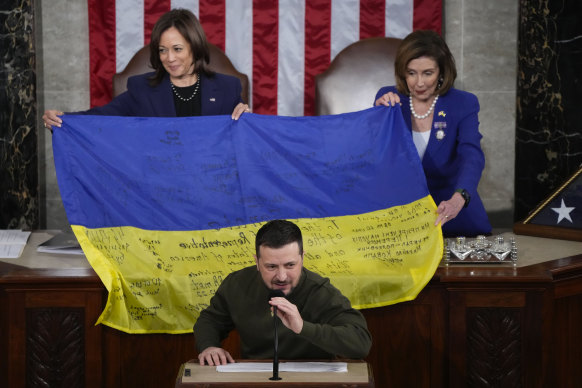 US House Speaker Nancy Pelosi and Vice President Kamala Harris hold open a Ukrainian flag that was presented to them by Ukrainian President Volodymyr Zelensky.Credit:AP

It must have been a surreal experience for Zelensky to deliver his historic speech to both chambers of Congress hours after landing in Washington – his first foreign trip since Russia invaded 10 months ago. His flight reportedly guarded by NATO spy-crafts and fighter jets.

It was surreal for those of us in the House as well – here was a man whose country is at war, bringing his message to sustained applause and overt admiration, seemingly with no fear for his own safety.

If the former comedian-turned-wartime-leader was phased, we in the audience couldn’t tell.

Wearing his trademark army fatigues and khaki boots, Zelensky mixed in doses of humour with his usual determination as he pleaded for America to continue supporting his country’s freedom and sovereignty.

“We have artillery, yes, thank you. Is it enough? Not really,” he said with a slight smile as members of Congress laughed along with him.

“Your support is crucial not just to stand in such a fight, but to get the turning point to win on the battlefield.”

Zelensky walked into the joint sitting of Congress shortly after 7.30pm on Wednesday (Thursday am AEDT) and immediately received a lengthy standing ovation by Democrats and Republicans – some of whom had interrupted their holidays to return to Washington for the hastily convened event. Many managed a handshake, others a pat on the back or just a touch as he passed, nearly mobbed, through the packed chamber.

You got the feeling he understood the gravity of this moment, just as we did, too.

As the raucous applause continued, the 44-year-old appeared overwhelmed with gratitude, at one point saying: “It’s too much”. 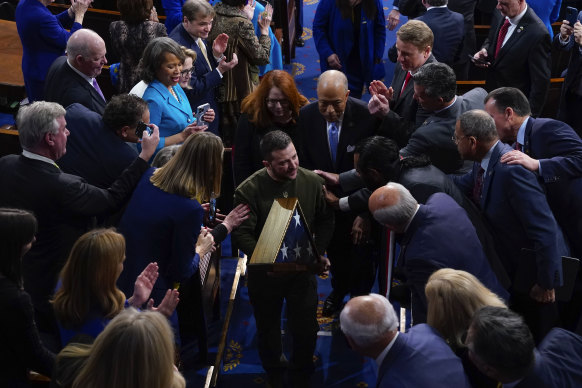 Ukrainian President Volodymyr Zelensky holds an American flag that was gifted to him by House Speaker Nancy Pelosi of Calif., as he leaves after addressing a joint meeting of Congress in Washington on Thursday.Credit:AP

In a speech lasting about 25 minutes, Zelensky thanked the US for its support and warned the stakes of the conflict were much higher than the fate of his nation. Democracy and global security were also being tested.

“It is in your power, really, to help us bring justice to everyone who started this unprovoked and criminal war,” he said. 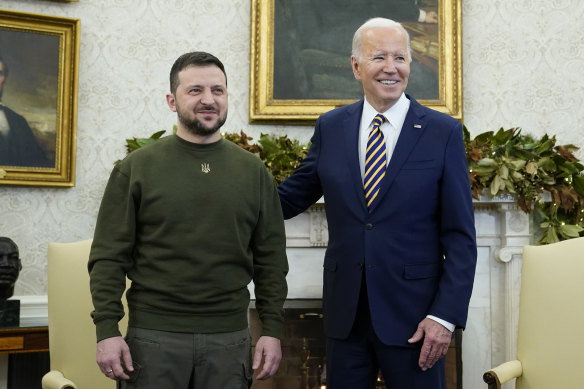 I remember watching Zelensky’s last address to Congress in March, done via video link when the war was still in its infancy. Its most dramatic moment was when he played a graphic video with images of what Ukraine was like before Russia’s bloody invasion, which shifted dramatically to the heartbreaking scenes of violence and destruction the world has witnessed ever since.

Footage of blood-soaked babies being rushed to hospital. The indiscriminate shelling of once peaceful neighbourhoods. The carnage of dead bodies on the side of the road.

This speech was devoid of the graphic images, but it felt equally significant, and just as heavy on symbolism and substance.

In terms of symbolism, it’s been 300 days since Putin tried and failed to seize Ukraine in a violent incursion that would have likely been over had it not been for the brave resistance of Zelensky and his people.

Now here he was: touching down in Washington on an American plane; standing shoulder to shoulder with President Joe Biden at the White House; an international hero in the US Congress.

As for substance, the visit comes at a pivotal time for Ukraine, whose counter-offensives are slowing down, and some Americans are starting to question the soaring cost of continuing to defend the country. 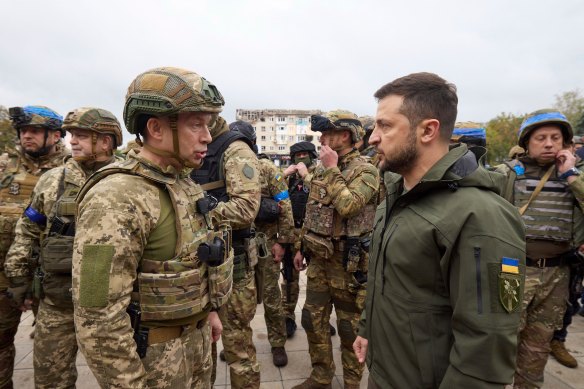 As far-right Republican Paul Gosar tweeted during Zelensky’s speech: “Over 5 million illegal aliens walked across our border in the last two years. We are under a sustained invasion. Not one red cent should go to Ukraine while our border is open.”

To that end, Zelensky had a mission beyond the mere optics: to convince the newly divided Congress – where Republicans will hold the House majority next year, while Democrats control the Senate – to continue providing billions of dollars in military aid for a war that’s showing little sign of abating.

Time will tell if he achieved his goal. For now, at least, the American political class is energised by his hero appearance and Biden isn’t wavering.