The NSW government has taken the first step towards establishing the long-awaited Indigenous Walama Court by announcing a pilot program for Aboriginal offenders that will involve elders and respected community members in sentencing discussions.

The plan marks a departure from the original proposal for a standalone court established by legislation, such as the Drug Court. It will instead operate as a list inside the NSW District Court in Sydney, to which eligible Aboriginal offenders can be referred. 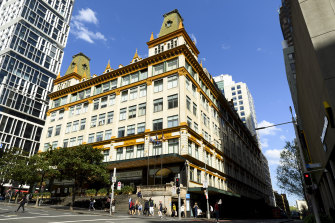 The Walama List will start in February at the Downing Centre District Court.Credit:Rhett Wyman

The announcement, to be made officially on Monday, has drawn mixed reactions from stakeholders. Some hope it’s the first step towards a permanent court but others fear it may be dooming those plans to failure.

The Walama list takes its name from the word for “come back” in Dharug language and will involve Aboriginal and Torres Strait Islander elders and respected persons in a sentencing discussion and case plan conversations with the presiding judge.

The state government says the pilot scheme, starting in February, will operate for a week each month and has the capacity to accommodate up to 50 Indigenous participants at a time. Offenders will be drawn from the Sydney, Parramatta, Penrith and Campbelltown district courts.

The state government has yet to announce the level of funding attached to the scheme and it does not have a fixed timeframe for the pilot, although it is expected to run for at least a few years.

Offenders must plead guilty to participate in the scheme and some sexual and violent offences are excluded. The program is based on intensive supervision of participants, which has been shown to reduce reoffending in other contexts.

The state government says elders and respected persons “may be required to explain relevant kinship connections of the offender, how a particular crime has affected the Aboriginal community and advice on cultural practices, protocols and perspectives relevant to sentencing”.

Support services, such as counselling or drug and alcohol support, will be provided.

The Indigenous imprisonment rate in NSW is almost 20 times higher than that of the general population. First Nations people make up 3 per cent of the state’s population but account for 27 per cent of NSW’s average daily prison cohort — an average of more than 3500 Indigenous people in state prisons on any given day.

Aboriginal Affairs Minister Don Harwin said the “groundbreaking initiative goes to the heart of our commitment under the National Agreement [on Closing the Gap], by embedding Aboriginal customs and learnings into the justice system and supporting Aboriginal people to drive better outcomes”.

A business case for the proposed court, put together by the NSW Department of Justice in 2018, found it would cost less than $4 million a year and could deliver more than $20 million in savings on prison beds and recidivism rates over six to eight years.

Sydney barrister Damian Beaufils, a Gundungurra man and member of a group of First Nations lawyers who backed the proposal for a standalone court, said the plan had “given me a lot of hope” that the government was recognising “how important our voices are” in decision-making.

“I think it’s a really good step in the right direction,” he said. “It just shows a willingness, I think, to try something different.”

Mr Beaufils said the fact the program was a list rather than a court meant it did not have “the legislative weight that something like the Drug Court does have”, meaning it could potentially be disbanded more easily.

But he added that “I’ve got a feeling that it’s going to be so successful that the legislation will come pretty soon”.

The state government intends to use the pilot as a way of testing the proposal’s effectiveness including on a cost-per-participant measure.

The District Court said the pilot list was the next step in the court’s commitment to developing a Walama Court.

“The support of the Attorney-General and funding for the pilot enables the essential involvement of elders in sentencing conversations and importantly for elders to be remunerated for their participation,” said District Court Chief Judge Derek Price.

But the Aboriginal Legal Service (ALS) is concerned the pilot list won’t adequately support Aboriginal people who come into contact with the justice system and wants the government to commit to a court rather than just a list.

“We remain a member of the [Walama Court] working group — our lawyers have been trained to participate in the list,” said Nadine Miles, the ALS’s acting chief executive.

“There is limited funding being offered for the operation of the list and it will not fund the level of services required to assist offenders in working through the list and receiving the intensive supports to assist in rehabilitation.”

Ms Miles said this could “potentially, as I see it, lead to the list not delivering on the promise of the court, which could then, in turn, see the model itself shelved.”

Ms Miles said the ALS was reserving its position on the list, although she and her staff would still work on any scheme aimed to improve outcomes for First Nations people.