The team of eight climbers was attempting to climb a Nanda Devi peak in India when the area was hit by an avalanche. 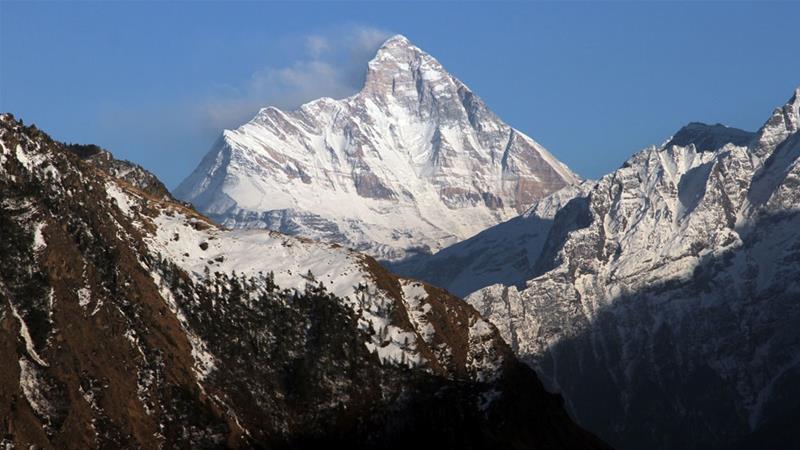 Five bodies have been sighted by Indian air force pilots during their search for a missing team of eight international climbers attempting to climb India’s second highest mountain, officials said.

The rescue efforts for the group, which includes four Britons, two US citizens, an Australian and an Indian, was launched on Saturday after they did not return to their base camp as scheduled last Monday.

“Pilots carrying out helicopter sorties found five bodies in the region that was hit by an avalanche, where the trekkers had reportedly gone missing,” Vijay Kumar Jogdande, the top civil servant in the Pithoragarh district of India’s rugged state of Uttarakhand said.

“We assume the bodies are from the team that went missing. It is likely that the three remaining bodies would be in the same area,” he said.

The team was attempting to summit a previously unclimbed peak on the 7,817 metre Nanda Devi mountain, officials said, confirming reports of multiple avalanches in the area. Contact with the team was lost on May 24.

“Since the region where the bodies were found is over 5,000 metres, which is seeing heavy snowfall and winds, we will not be able to send a team today. We are seeking a feasibility report and hope to send teams to retrieve the bodies on Tuesday,” Jogdande added.

On Sunday, Jogdande said the chances of finding survivors among the team were “bleak”. The casualty rate in the region is almost five times higher than on Mount Everest, the world’s tallest peak, and rescuers would need at least three or four days of walking to get to the avalanche site, officials said.

It has been one of the deadliest climbing seasons in the Himalayas for several years. More than 20 people have been killed in the mountains, including 11 on Mount Everest which has been plagued by poor weather, inexperienced climbers and overcrowding.

Nanda Devi and its sister mountain, Nanda Devi East, are among the world’s most challenging peaks and only a handful of people have climbed them.

The leader of the missing group, Martin Moran, was the first person to summit Changuch, another peak in the area, and was known as a “godfather” of guiding in the Himalayas, according to a video diary of Rob Jarvis, who accompanied him on that expedition in 2009.

“He was very well versed with the area, but the route they were taking is not usually travelled,” Sanjay Gunjiyal, a senior police official involved in the mission, told Reuters news agency. Many of the other missing climbers are veterans but with little experience of Nanda Devi and its surrounding peaks, he said.

The Uttarakhand district magistrates’ office has identified the eight missing as Martin Moran, John McLaren, Rupert Whewell and Richard Payne (all from the United Kingdom), Anthony Sudekum and Ronald Beimel from the United States, Ruth McCance from Australia, and Chetan Pandey of the Indian Mountaineering Foundation.

Moran was the expedition leader and Pandey the liaison officer. Four other climbers, who were part of the group, were rescued on Sunday after turning back early because of the harsh weather.