It is hard to believe that this year, of all years, a political party would elect a pants man as leader. Yet here we are, 2021, the year that brought us powerhouse Brittany Higgins and brought down former attorney-general Christian Porter – and the Nationals have reJoyced, with Barnaby Joyce elected leader of the Nationals in place of the charmless but stoic Michael McCormack.

The party did not even blink. Or think. I can’t think of a person less suited to lead a party in disarray, or even array, in 2021, although Tony Abbott would also be bad. Here are the reasons why Joyce is a terrible, horrible, no good, very bad choice. 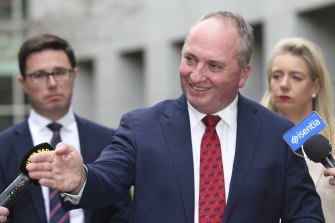 Barnaby Joyce has returned to the leadership of the Nationals.Credit:Alex Ellinghausen

1. In 2018, former West Australian Rural Woman of the Year Catherine Marriott revealed she made a sexual harassment allegation against Joyce. And what did the Nationals do? They had an “internal party investigation”. The federal body sent it to the state branch. Joyce’s own team investigated Joyce and found it was “unable to make a determination” about the allegation because of insufficient evidence. The branch refused to release the final report, Joyce has denied harassing Marriott and claimed the allegations were “spurious and defamatory”. I haven’t heard he’s sued Marriott.

Still. As Marriott said at the time: “The party never had the external processes in place to deal with a complaint of sexual harassment by a member of parliament … my complaint was handled internally by NSW National Party executive with no professional external expert brought in at any stage to handle the matter.” It would be like getting members of the Australian Club to investigate sexism and misogyny. This is the guy the Nationals have elected to run their party in the same year as we have Sex Discrimination Commissioner Kate Jenkins holed up at Parliament House to try to sort through the mess exposed by former staffer Higgins. No process, no judgment. Speaking of staffers …

2. The Marriott news happened just after we discovered Joyce was having a relationship with his staffer, Vikki Campion, resulting in Malcolm Turnbull’s brilliant bonk ban. Barnaby Joyce’s political judgment sucks (although not when it comes to women. Both his wife Natalie Joyce and partner Vikki Campion were too good for him.) Again, no clear process, poor judgment.

3. For years Joyce lectured us about how we should behave. Back in 2005, the brand new Queensland senator for the Nationals told The Age’s Jason Koutsoukis: “I’m a strong Catholic. I’m anti-abortion, I’m anti death penalty and I’m going to be standing up for conservative family values.” And quicker than you can say “shocking hypocrite” (or 12 years), we discover Joyce abandoned his wife and four daughters to shack up with staffer Vikki Campion. I can’t find any wedding notices for the happy couple but I do note they now have two beautiful baby boys. Not that there’s anything wrong with that (I certainly shagged before I married; and after, but with the bloke I married). But I’d have thought strong Catholics preferred not to live in sin. Maybe Joyce has shunned marriage now gays can wed, seeing as he campaigned against equal marriage at the time.

4. The Coalition is trying to overhaul Medicare with six weeks’ notice of changes to 900 items on the Medicare Benefits Scheme. No wonder it’s terrifying people. The last time Joyce had anything to say about health, he told us that he would not back the free provision of Gardasil (the human papillomavirus vaccine) on the national immunisation program because it would encourage promiscuity. I assume he can’t blame this lifesaving vaccine for his own behaviour.

5. Hard to rank all these reasons to reject Joyce but here’s one that will affect us all. Barnaby Joyce barely believes in climate change. He thinks renewable energy is unreliable. Now he’s leading a party in the Coalition that must fudge its position when it comes to dealing with our key trading partners. There are no jokes possible here.

Jenna Price is a visiting fellow at the Australian National University and a regular columnist.

06/21/2021 World News Comments Off on Five reasons why Barnaby Joyce is a terrible, horrible, no good choice for the Nationals
Recent Posts