What a mop of hair! Hungarian herding dog Ruby appears to levitate as she darts around obstacle course on canine sports day

This is the moment a Hungarian herding dog appears to levitate as it sprints at full pelt during a doggy sports day.

Five-year-old Ruby resembles a thick black mop as she takes flight while darting after a toy bunny at top speed during the timed challenge.

The Hungarian Puli, whose distinctive looks recently bagged her a role in the new Cruella film, was pipped to the prize of fastest dog by rival ‘Paintbrush the Pumi’. 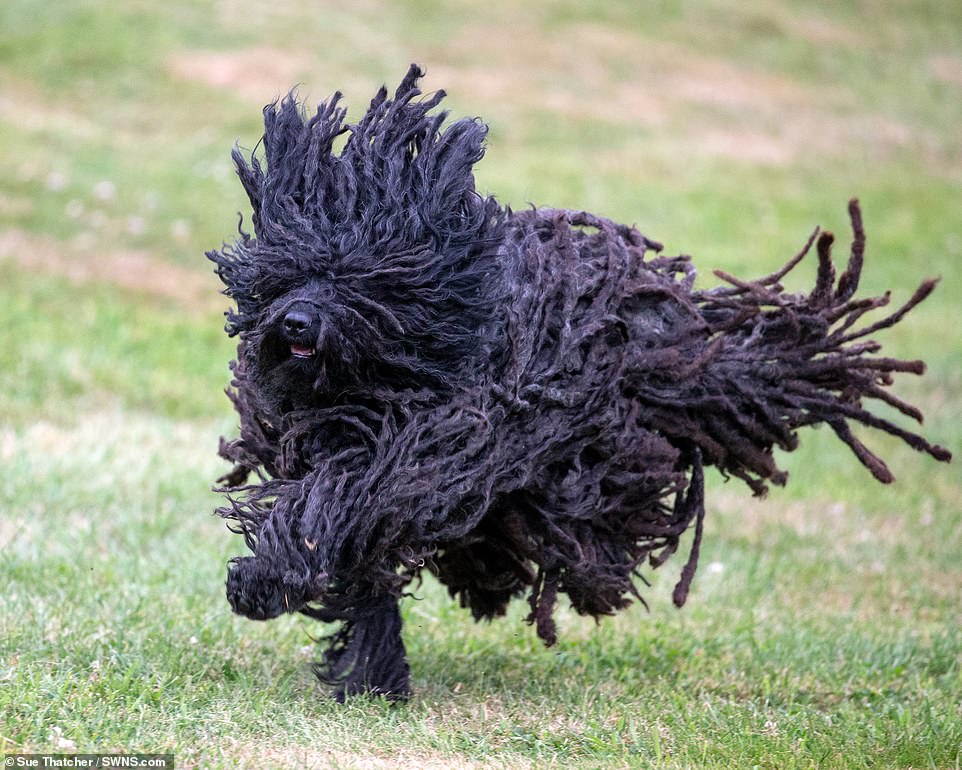 Ruby (pictured) is a five-year-old Hungarian Puli with a busy schedule: as well as competing at doggy sports days, she has a role in the new Cruella film 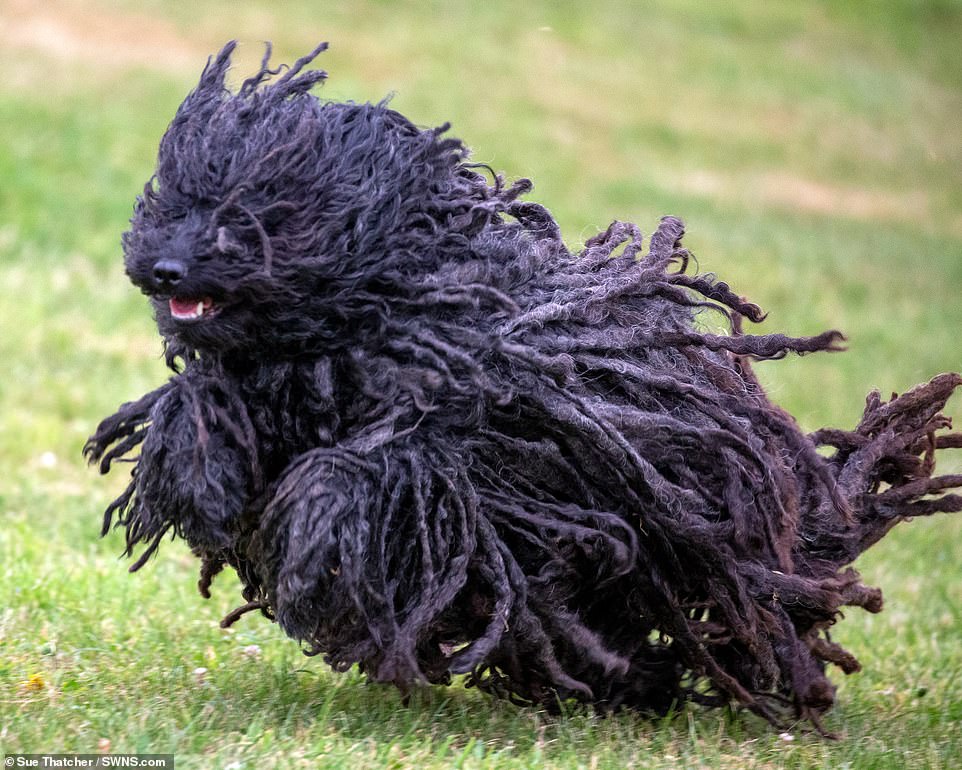 Ruby came in second place in the ‘fastest dog’ contest, an impressive feat given the event attracted 30 competitive pooches. Some think Ruby resembles a spider, others say she looks like a mop 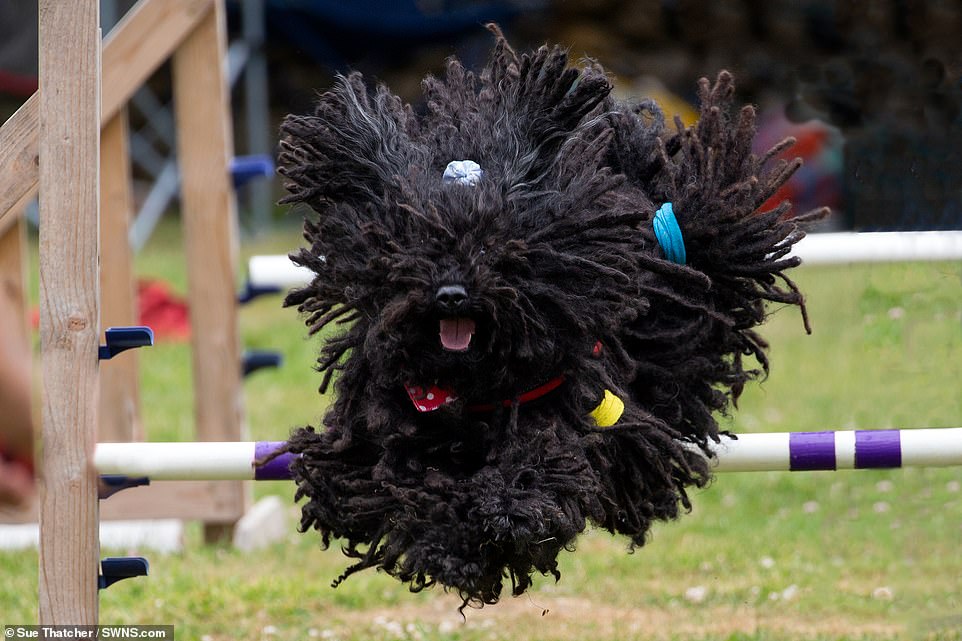 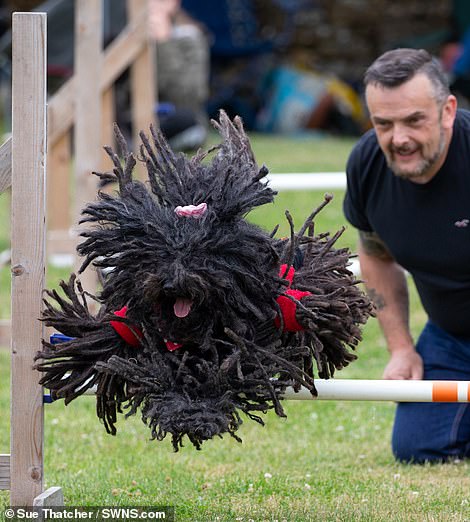 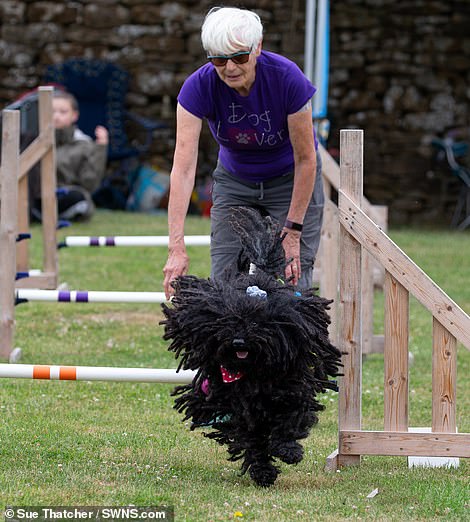 Pictured: Leia deftly leaps over hurdles, encouraged by bystanders, as she competes in a crowded contest to be top dog 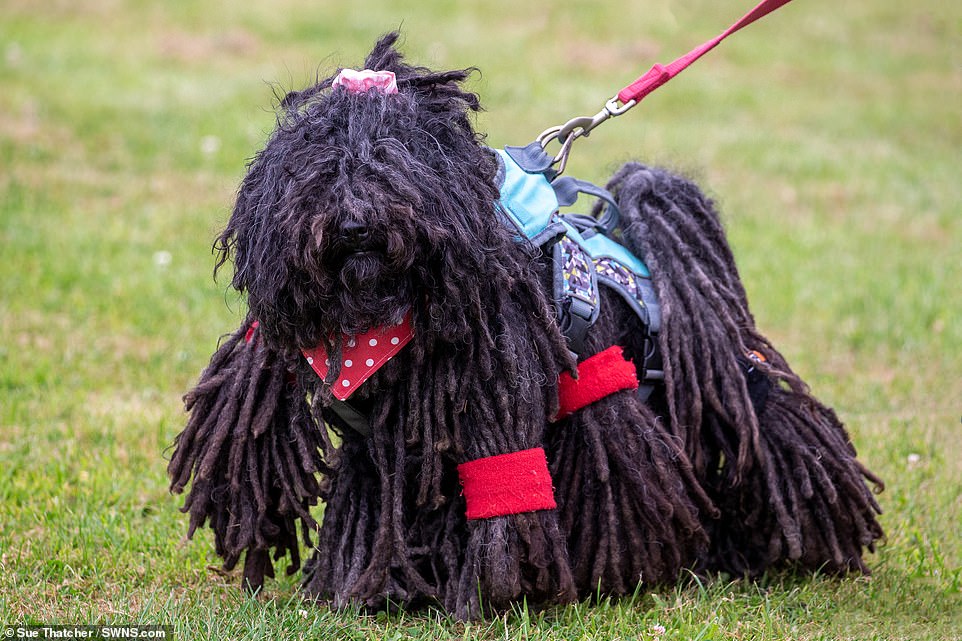 Leia is back on her lead, her mop-like fur adorned with red hairbands 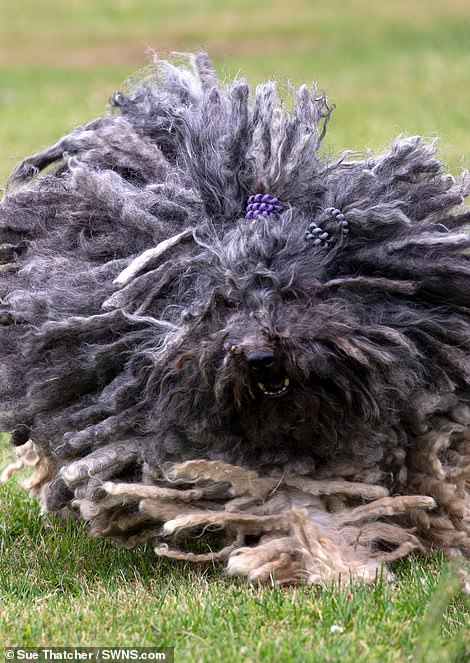 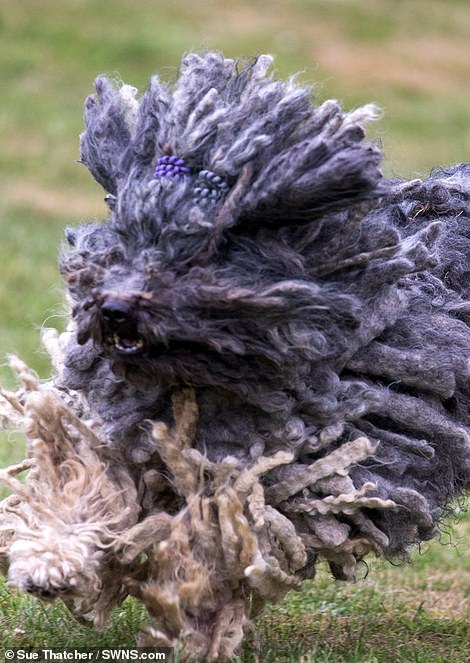 Ben the Hungarian Puli hits the ground running, as the canines vie to capture a toy bunny in a timed challenge

Photographer Sue Thatcher, 69, said that Ruby travelled at a lightning-fast pace despite her heavy coat.

“She runs very fast – under their coats Pulis are quite slim and athletic.

“Pulis are delightful – they traditionally protect sheep flocks in Hungary. If you saw that coming towards you and you were a horse you’d run away.” 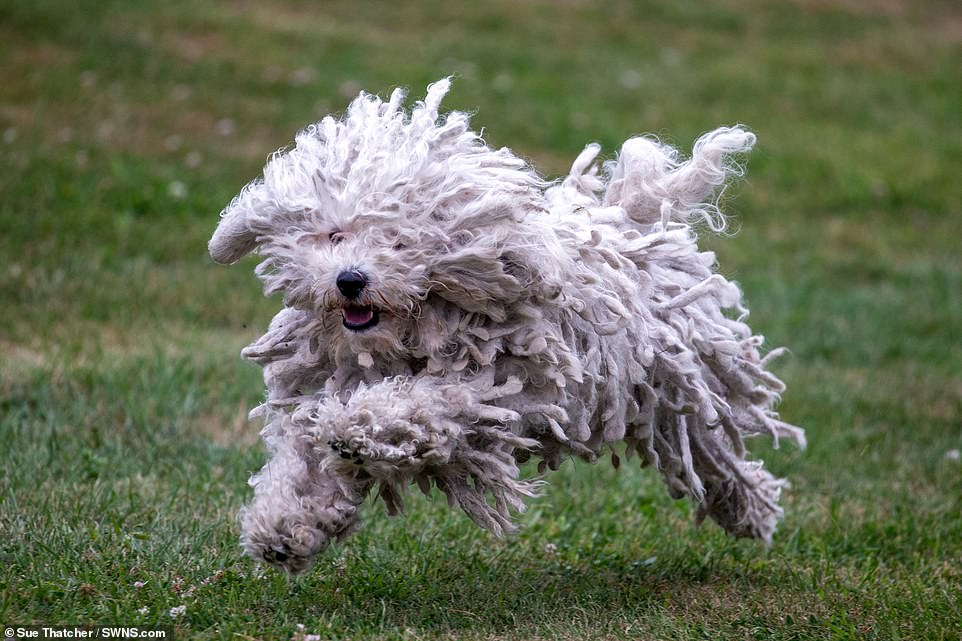 Pictured: A white Hungarian Puli appears to hover above the ground, its coat of tight curls resembling dreadlocks 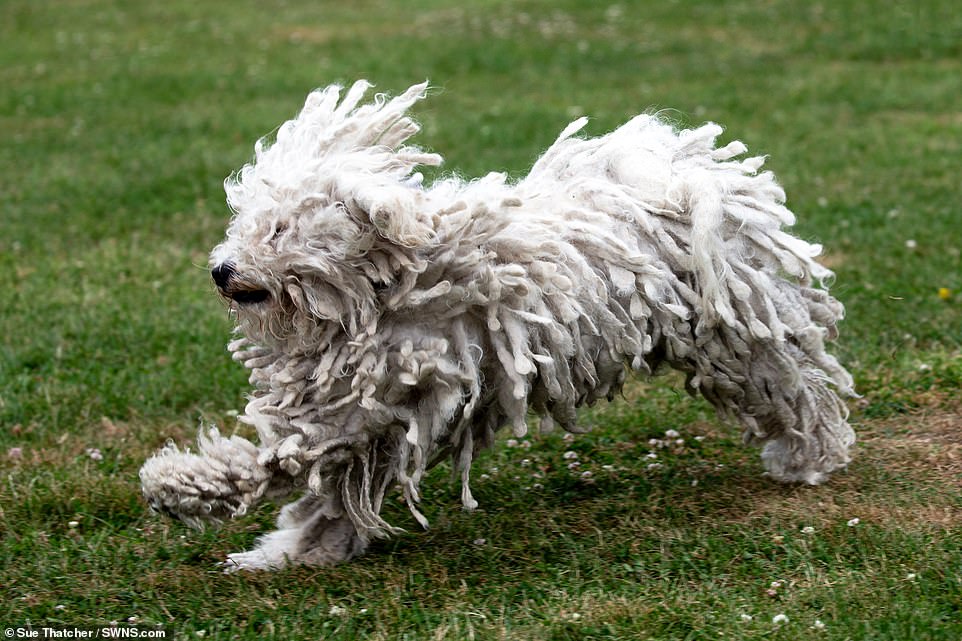 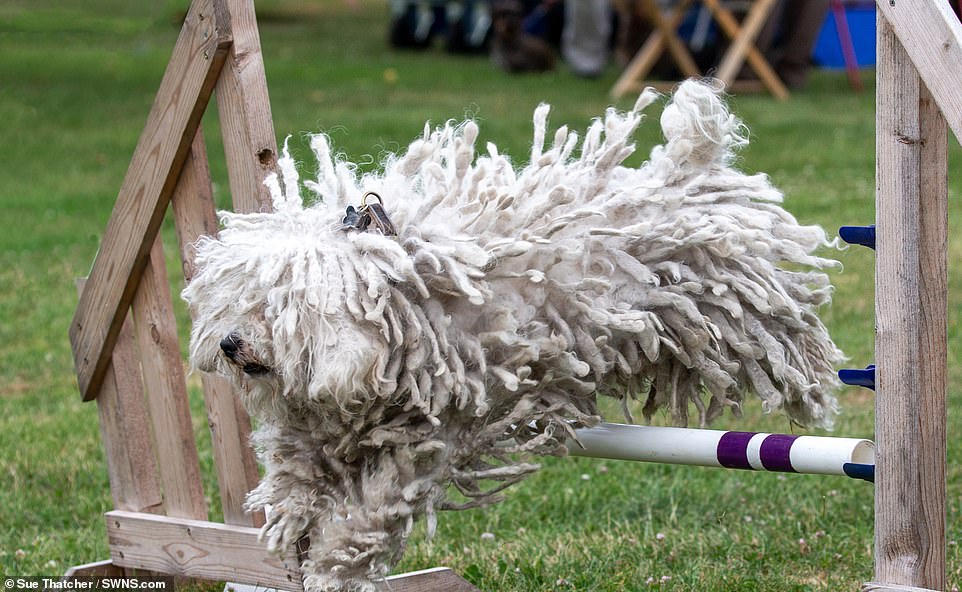 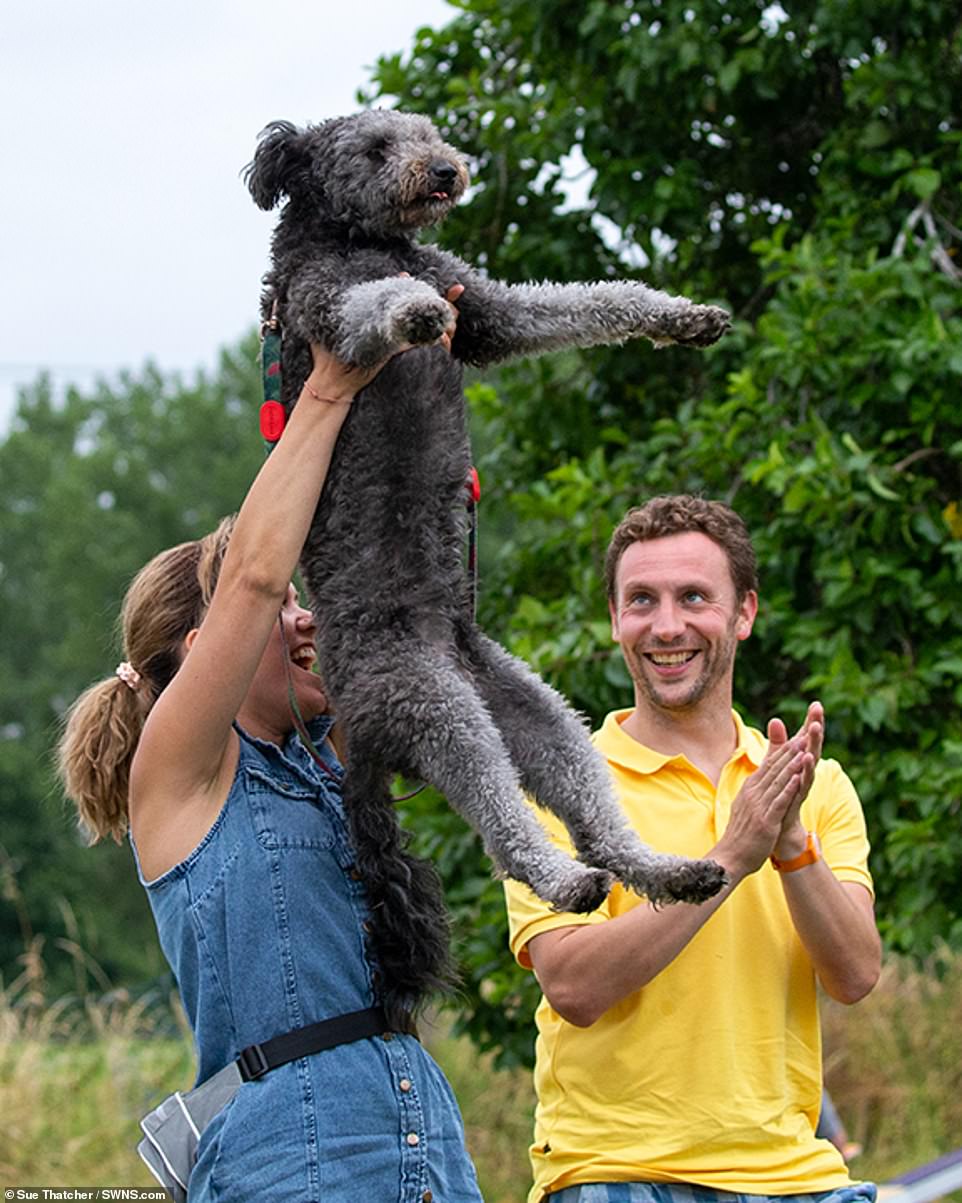 VICTORY! Paintbrush, a Hungarian Pumi, came in first place in the ‘fastest dog’ contest. Owners Lee Bofkin and Anita Bodis celebrate their pooch’s triumph. Paintbrush is sporting a much more conservative hairdo, a factor that may have advantaged him against his shaggier peers

The all-day Hungarian breed sportsfest took place at a private garden in Sutton-under-Brailes, Warwickshire and attracted 30 pooches for the day’s events, which included agility, scent and hoop challenges.

Sue, from Milton Keynes, added: “The dogs loved it. People came from all over to the event – some from Norfolk and Gloucester.”