Booming out of a small speaker in the corner of the cafeteria at Avenues, a private school in Chelsea in Manhattan, a recorded voice asked, “Can you hear me?”

It belonged to Woldy Reyes, 32, a hearing-impaired Filipino-American chef who as a child pretended to be fully deaf and didn’t speak, afraid that he sounded too flamboyant. In the recording, he told a story about shame, of his sexuality and the food of his Filipino background — namely kalderetang kambing, a spicy, garlicky goat and tomato stew his father cooked over a large fire in the backyard of his family’s suburban Los Angeles home. While in college, Mr. Reyes had a moment of clarity. He finally came out — as gay, partially hearing and, later, proud of his culinary heritage. 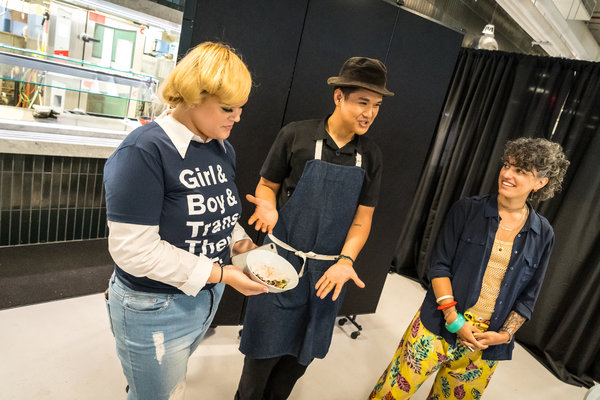 When the story finished, a set of room dividers opened to reveal Mr. Reyes, beaming, triumphantly holding a bowl of that goat stew, to be served to the cheering audience.

His tale is part of PrideTable, a two-week event that began on Monday, hosted by the organization StoryCourse. In celebration of Pride Month — this year is the 50th anniversary of the Stonewall riots — it incorporates a five-course meal, live performances and Mr. Reyes’s prerecorded story, all about the L.G.B.T.Q. experience. (Tickets are $169; proceeds will support arts and cultural training at the Hetrick-Martin Institute, an organization that empowers L.G.B.T.Q. youth.)

This isn’t your typical dinner theater. The medium is often associated with bland food and tired material, but Adam Kantor and Brian Bordainick, who organized PrideTable, want to change that perception.

In 2017, they started StoryCourse, using theater and food to showcase the voices of marginalized people. They’ve held events on the Korean-American experience with the chef Jae Jung of Cafe Boulud, and an interactive Passover Seder centered on the story of Mohammed Al Samawi, a refugee who fled Yemen in 2015.

Mr. Kantor, 33, is an actor, most recently in the Broadway musical “The Band’s Visit,” and Mr. Bordainick, 33, ran the underground supper club Dinner Lab. For PrideTable, they were inspired by the increasing number of L.G.B.T.Q. food events, like Queer Soup Night, a series of parties built around soup.

“So many queers have been disinvited from our family tables,” said Mr. Kantor, who identifies as queer. “It’s this idea of creating our own family meal, where the door is always open.”

In addition to Mr. Reyes, the featured chefs include Charlie Anderle, 24, who finds their queer, trans, black identity reflected in the gender-swapping oyster (“a fluid little diva”), and Dima King, 32, whose story of escaping anti-gay laws in Russia is performed by a chorus of young people and punctuated by a bowl of borscht. The chef Mellissa Santiago, 24, vogues — it was the medium she turned to during her transition — to “U R Knot Ready” by DJ Auxiliary before delivering platters of cinnamon-laced chicken wings, and Martin Boyce, 71, recounts his participation in the Stonewall uprising tableside, alongside a bittersweet caramel pudding decorated with shards of sugared glass — a homage to the Stonewall Inn’s shattered windows.

Some, like Mr. Boyce, have told their story many times. Others, like Mr. King, had never shared theirs.

“It was really hard to listen to the story for the first time in front of an audience and keep calm,” said Mr. King, whose story is told by the chorus. “But every time it is repeated, it releases the pain.”

Mr. Bordainick and Mr. Kantor worked with the Hetrick-Martin Institute to find standout performers for the show, including Fadonte Freedman, 21, Rafael (Nacho) Hernandez, 22, and Mercy Kelly, 23, who act as the chorus. (Ms. Santiago also comes from the institute.)

One reason performers were hired was to let the chefs focus on cooking. Liz Alpern, a founder of Queer Soup Night, and Ora Wise, who runs the queer and trans wellness collective Queer Anga, work as culinary advisers and hosts.

During a rehearsal last week, dishes were still being tweaked. But the aim is not perfection. Unlike at a fine-dining restaurant or a Broadway show, here the plating is rustic and the performances are more about passion than precision.

“The stories are rooted in the L.G.B.T.Q. movement, but they have wide appeal,” said Mr. Bordainick, who does not identify as queer. “I hope the people who come are people who enjoy hearing a powerful message communicated in an authentic way.”

While the meal is served at long tables with cloth napkins and polished silverware, there are reminders of the institutional setting: fluorescent lights, a beverage station, an allergy chart.

“School can be a really triggering space for queer people,” Mr. Kantor said. “Creating this warm, inviting, experience in a space that can be filled with trauma felt very exciting. There is this visceral response when you walk in, like, ‘Oh God, where am I going to sit?’ And I’m like, ‘We’ve got you, boo. You’ve got a place.’”

06/18/2019 World News Comments Off on For Pride Month, Dinner and a Show of Marginalized Voices
Recent Posts