A POLICE woman is fighting for her life after being stabbed in a suspected terror attack that saw the knifeman shot dead.

Two others were also wounded during the terrifying attack that began this morning just after 10am inside a police station in La Chappelle-sur-Erdre, in Nantes, France. 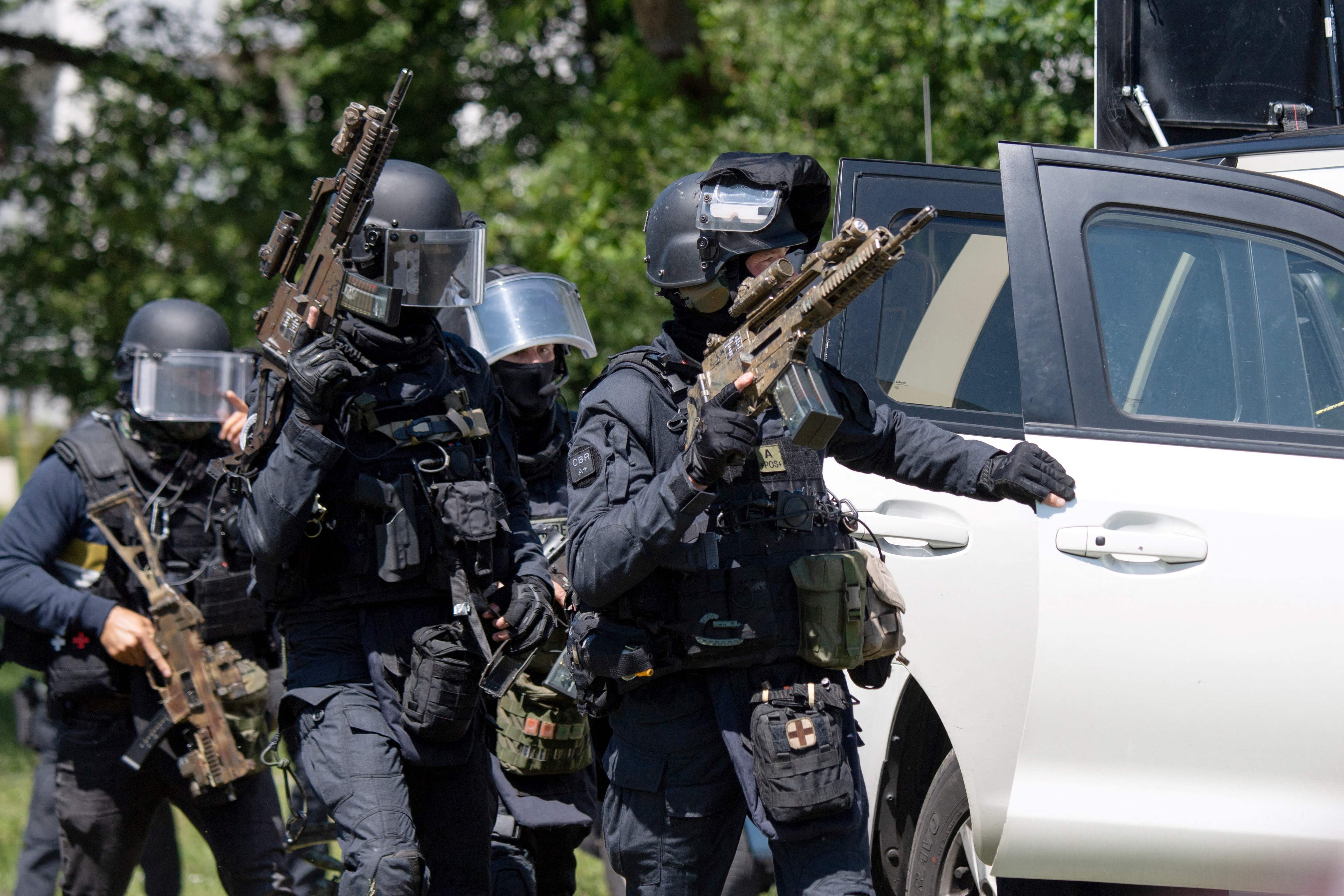 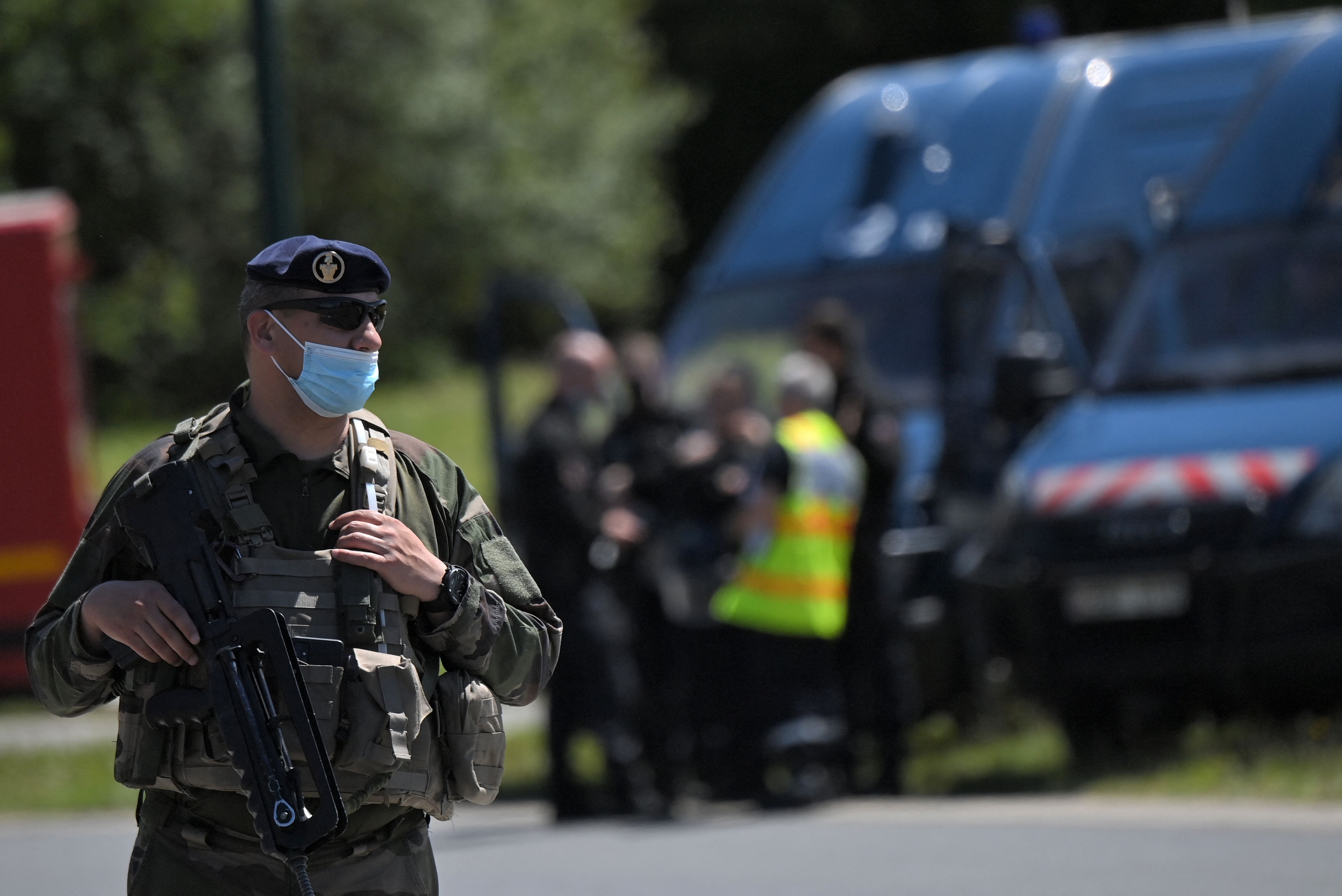 The female police officer, named as Katell Lerech by police, was wounded "in the thigh, arms and legs," and surgeons are still desperately trying to save her.

Katell, who is in her 40s, reportedly lives in Les Touches, a town north of Nantes, with her partner.

Laurence Guillemine, the Mayor of Les Touches, said: "This affects us all. She is known as a very kind woman, with lots of friends in the town."

The attacker has since been named by local media as Ndiaga Dieye, aged in his 40s, after he was shot dead by police when he launched a second attack on officers several hours later.

The suspect "slashed the woman several times with a knife inside police headquarters", according to cops, before he grabbed his victim's pistol and fled the scene. 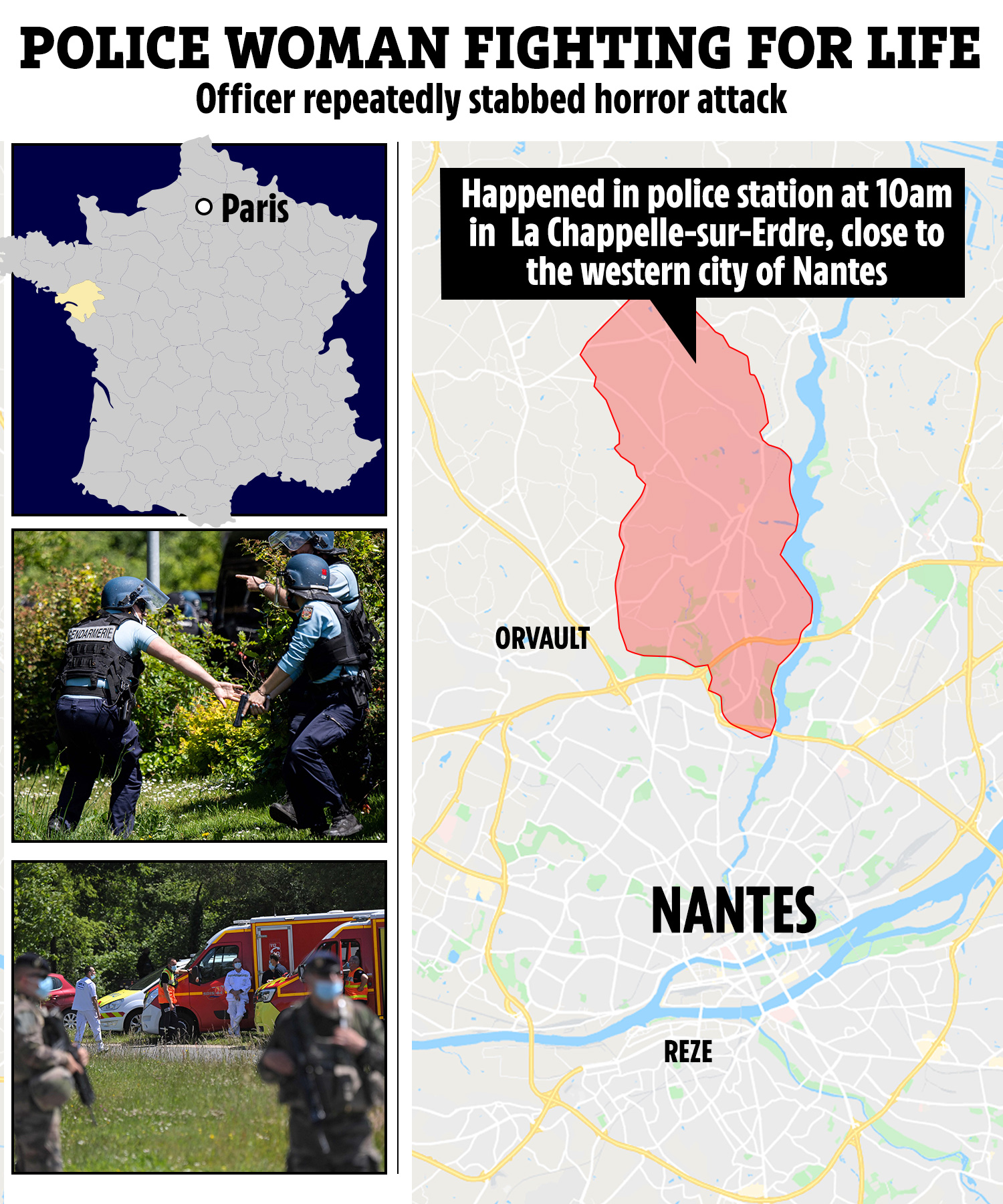 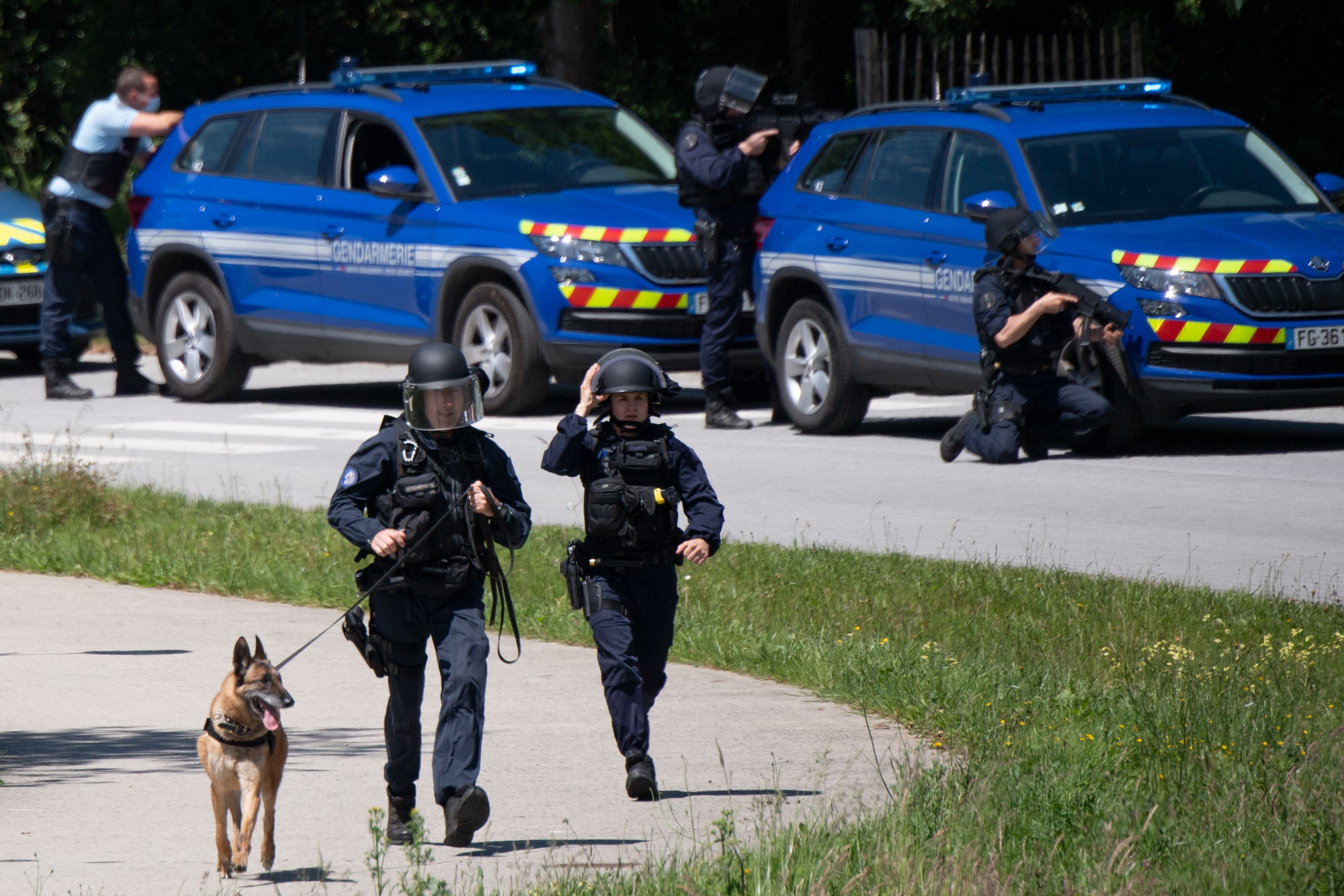 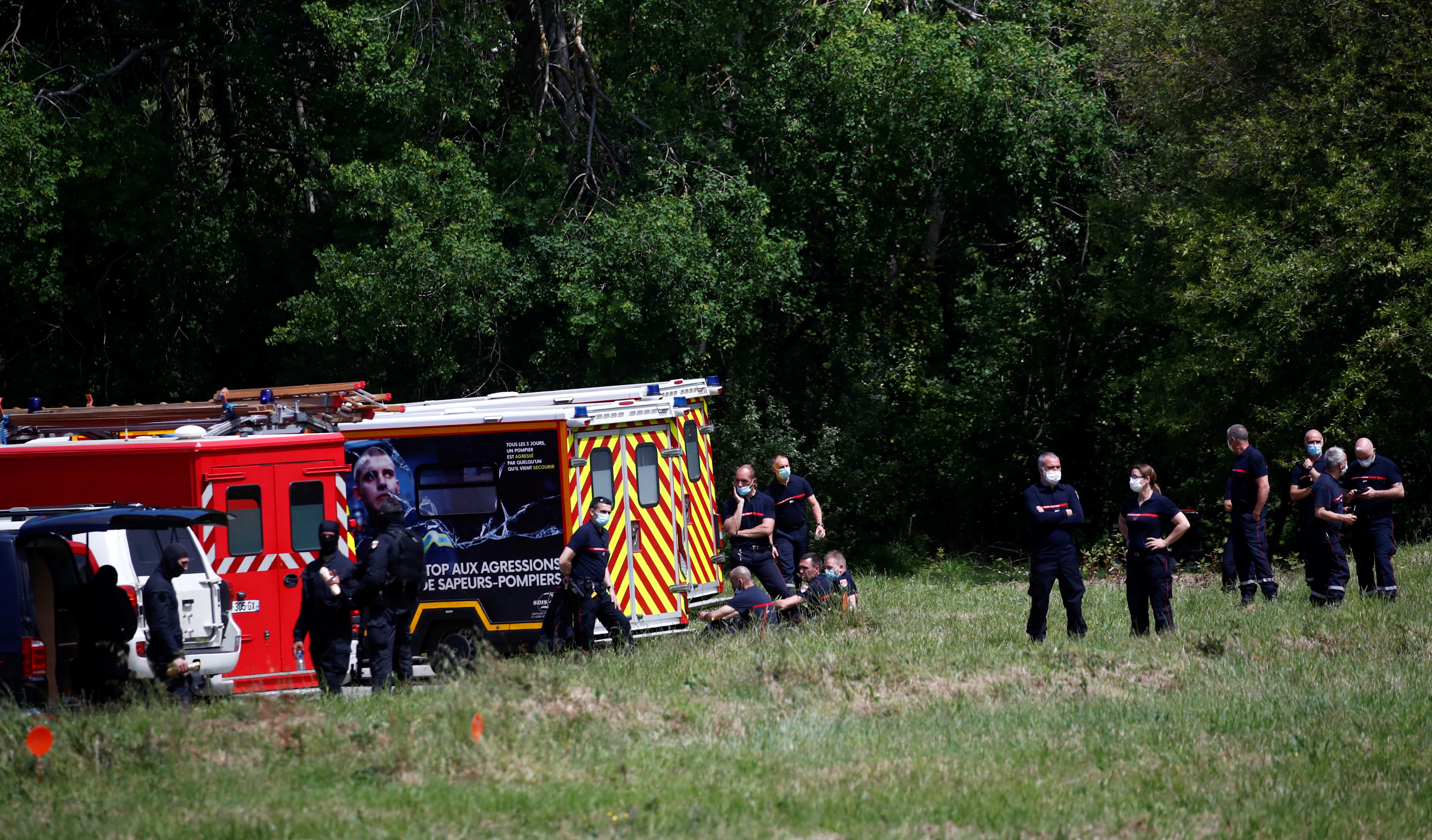 Witnesses said they saw the attacker escape in a VW Golf after the attack, before he reportedly crashed and had to continue on foot.

"He was brandishing the pistol taken from the police officer he stabbed," a local police spokesman said.

He was surrounded by authorities in a forest near Chapelle-sur-Erdre, the regional newspaper Ouest France reported, before he opened fire on officers.

Dieye then shot one cop in the hand and another in the arm before he was fired back upon by authorities, who arrested him in a serious condition before he later died of his injuries.

He had been in jail until March this year, according to police sources, where he had been sent to a specialist radicalisation programme after converting to a "rigorous" style of Islam in 2016, the Mail Online reports.

In the same year, he had been diagnosed with schizophrenia, according to the publication. 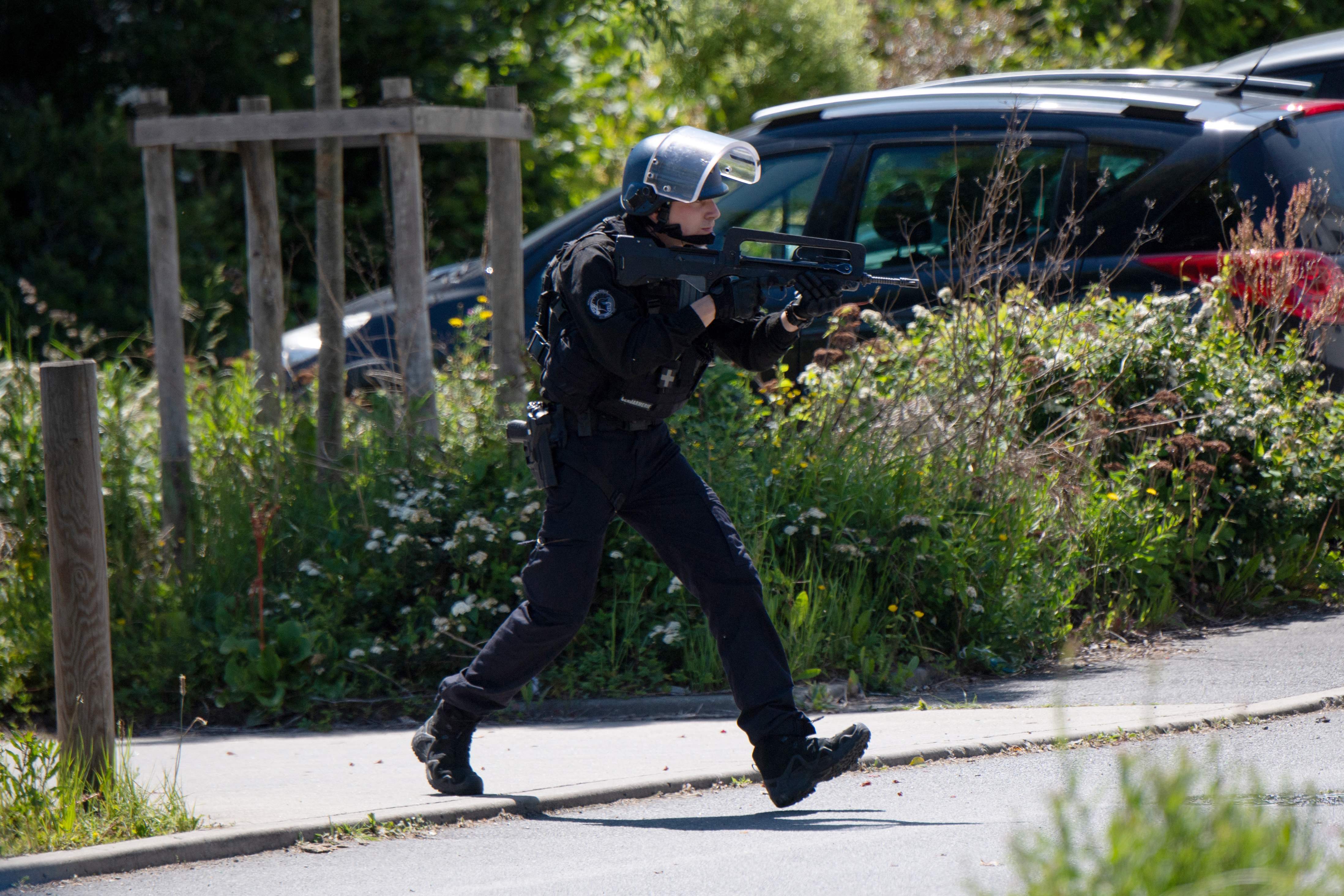 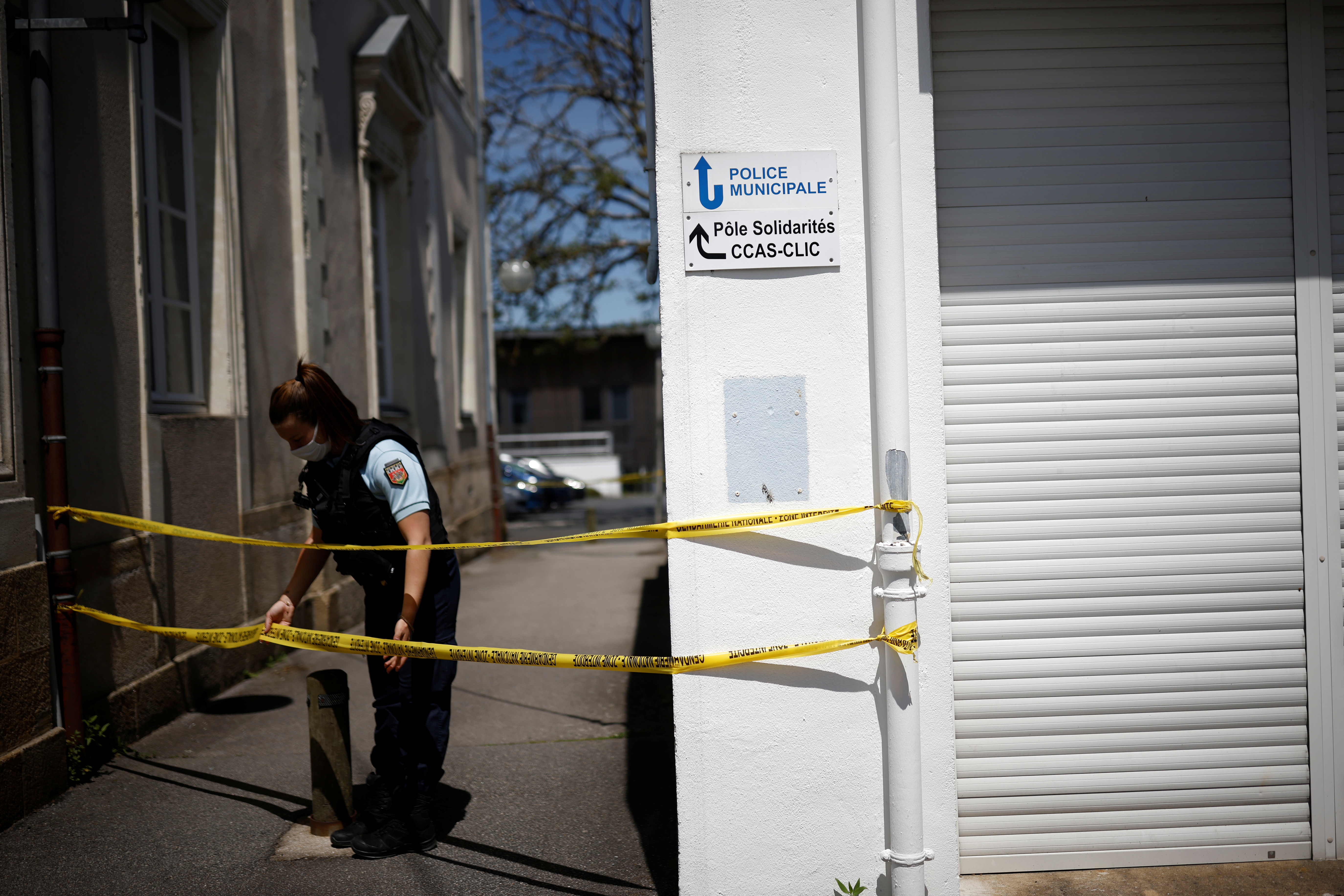 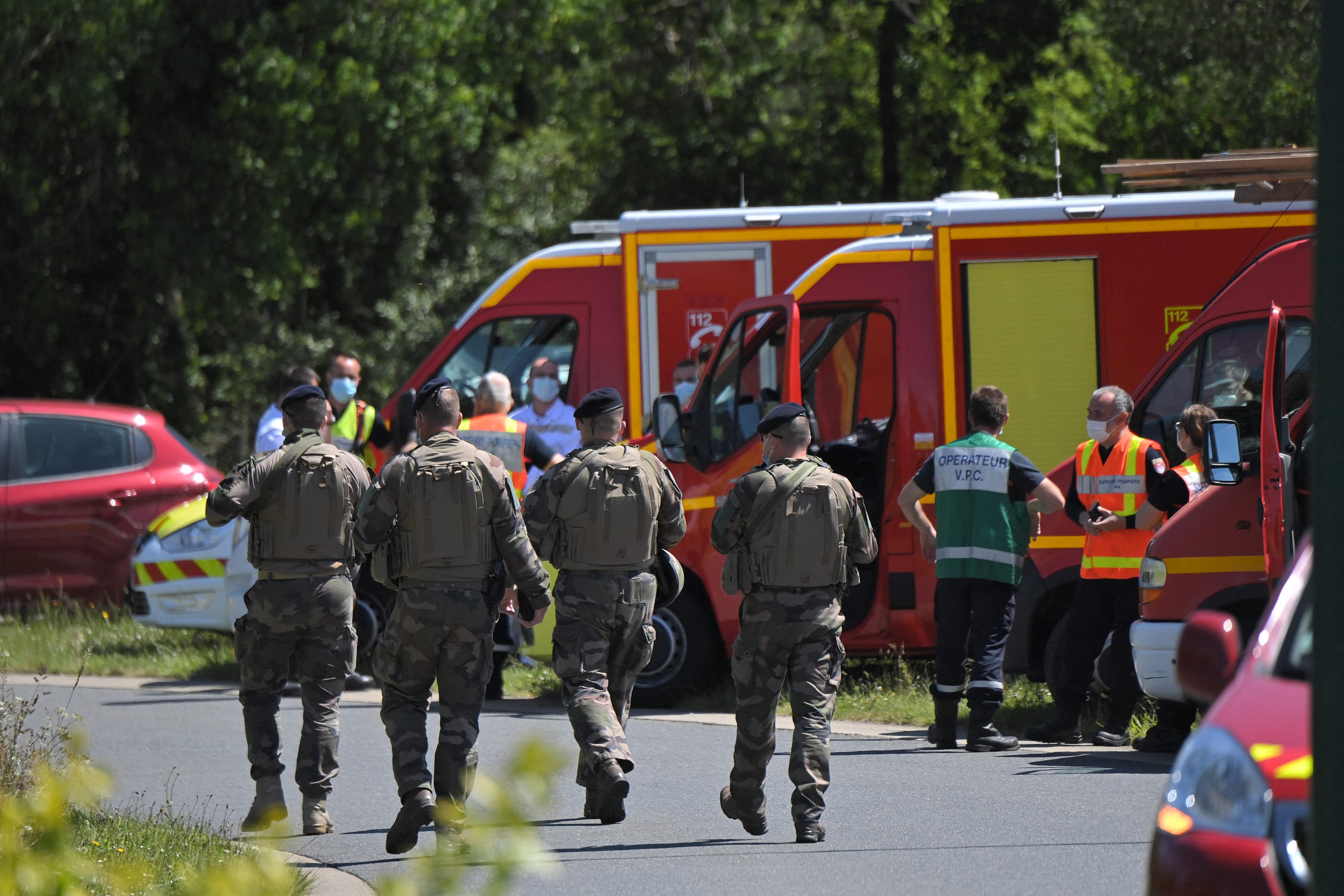 Heavily armed GIGN officers were leading the manhunt, along with police and gendarmes, as a helicopter searched from the skies, the spokesman said.

Around 240 officers were deployed to find the perpetrator.

Schools were locked down and local residents were told not to leave their homes.

"We drew the curtains and told the children to lie on the ground. They've been there for two hours," one local teacher told news outlet AFP by text message while pupils were holed up inside classrooms.

There was no initial indication of the attackers motives, police said.

French Interior Minister Gerald Darmanin addressed reporters after announcing he was on his way to the scene.

French far-right leader Marine Le Pen let rip in wake of the attack, tweeting: "I refuse to accept this is our daily life. We must finally fight this barbarism and never, absolutely never get used to it."

He is expected to try and oust President Emmanuel Macron in the next election on the crux that Macron is lax on security and should provide more police protection.

Friday's incident came on the same day that Justice Minister Eric Dupond-Moretti urged judges to exert "firmness" on those found guilty of attacks on police.

The incident comes after a series of terror attacks across France, including the murder of a female police worker by an Islamist knifeman in the Paris suburb of Rambouillet last month. 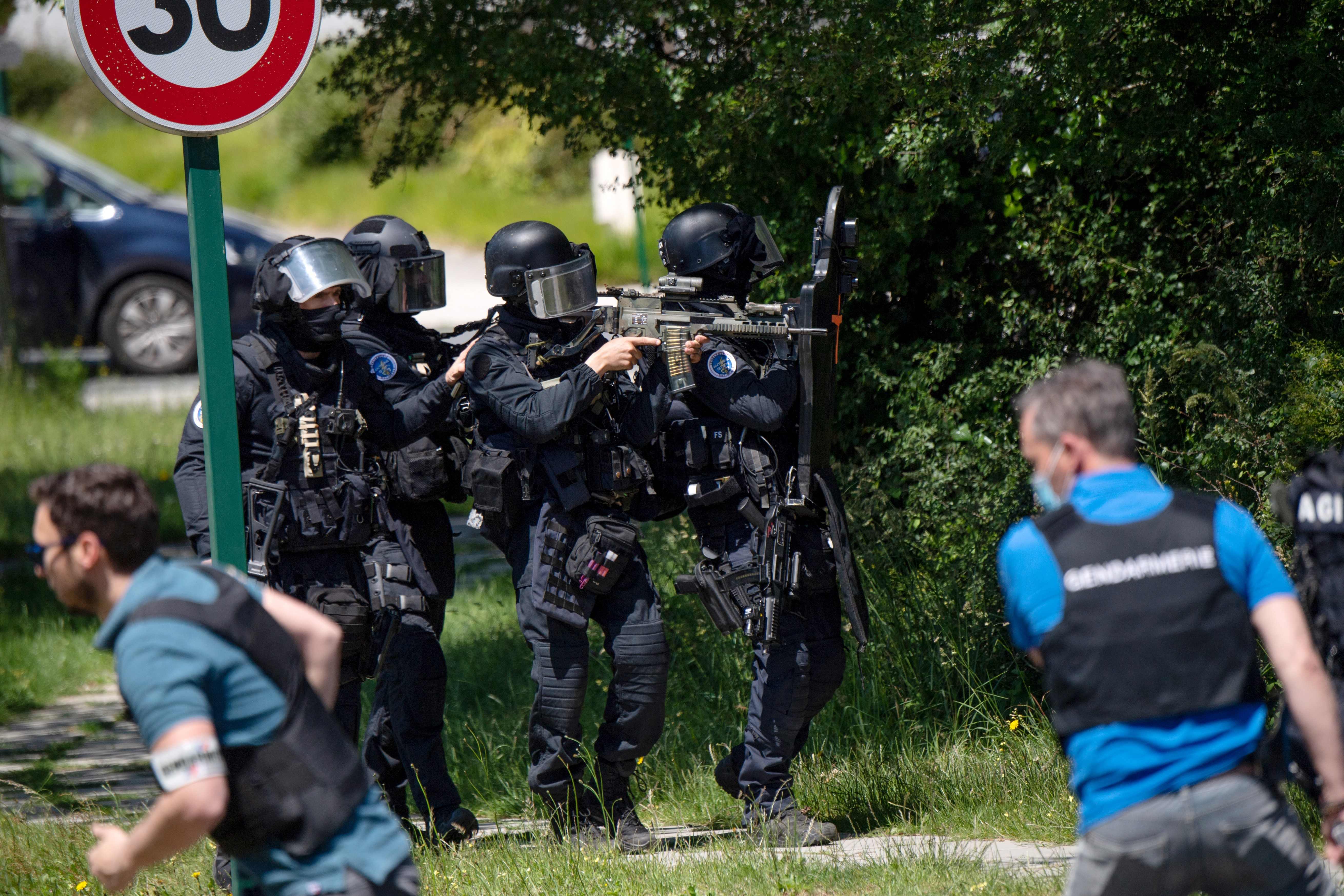 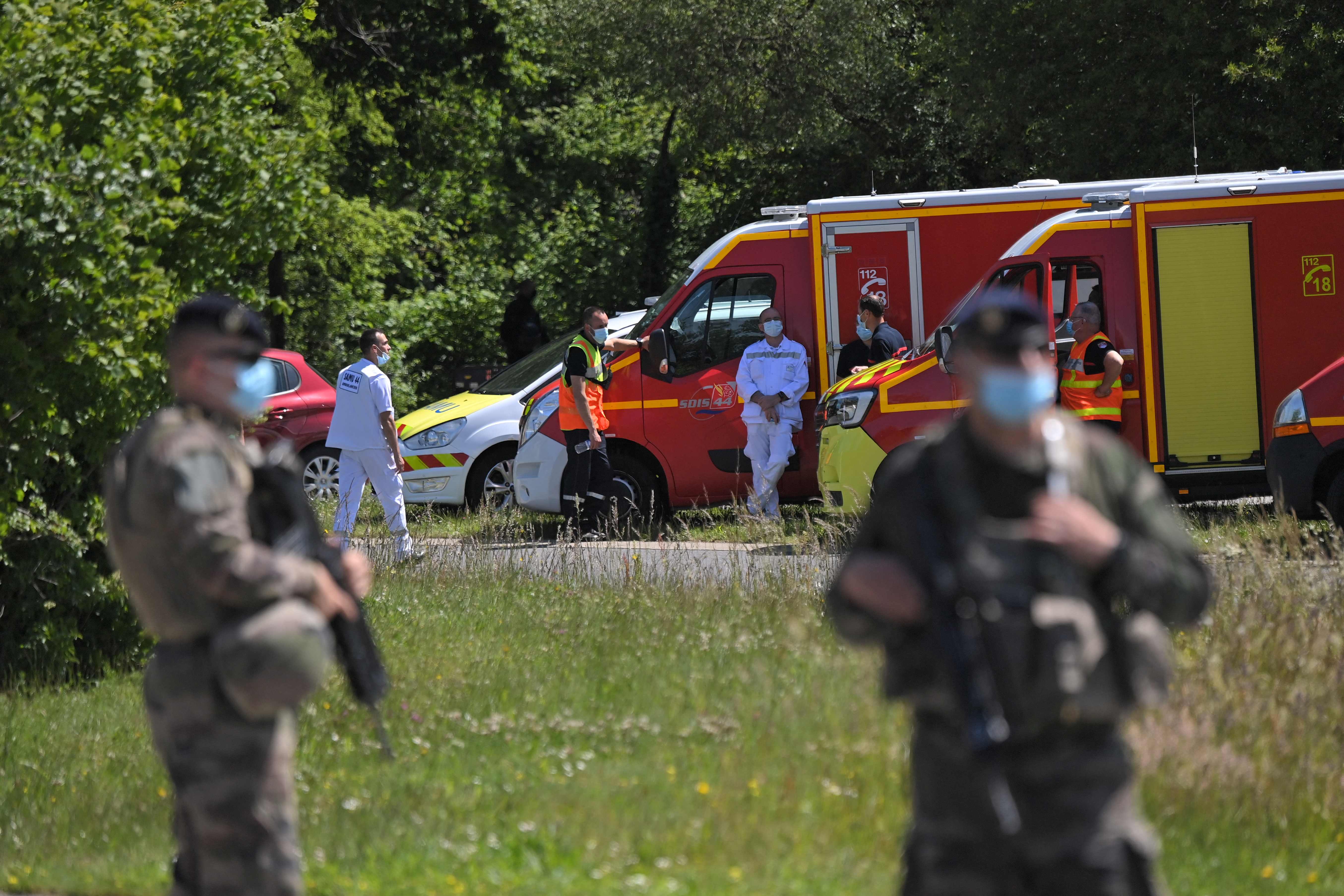 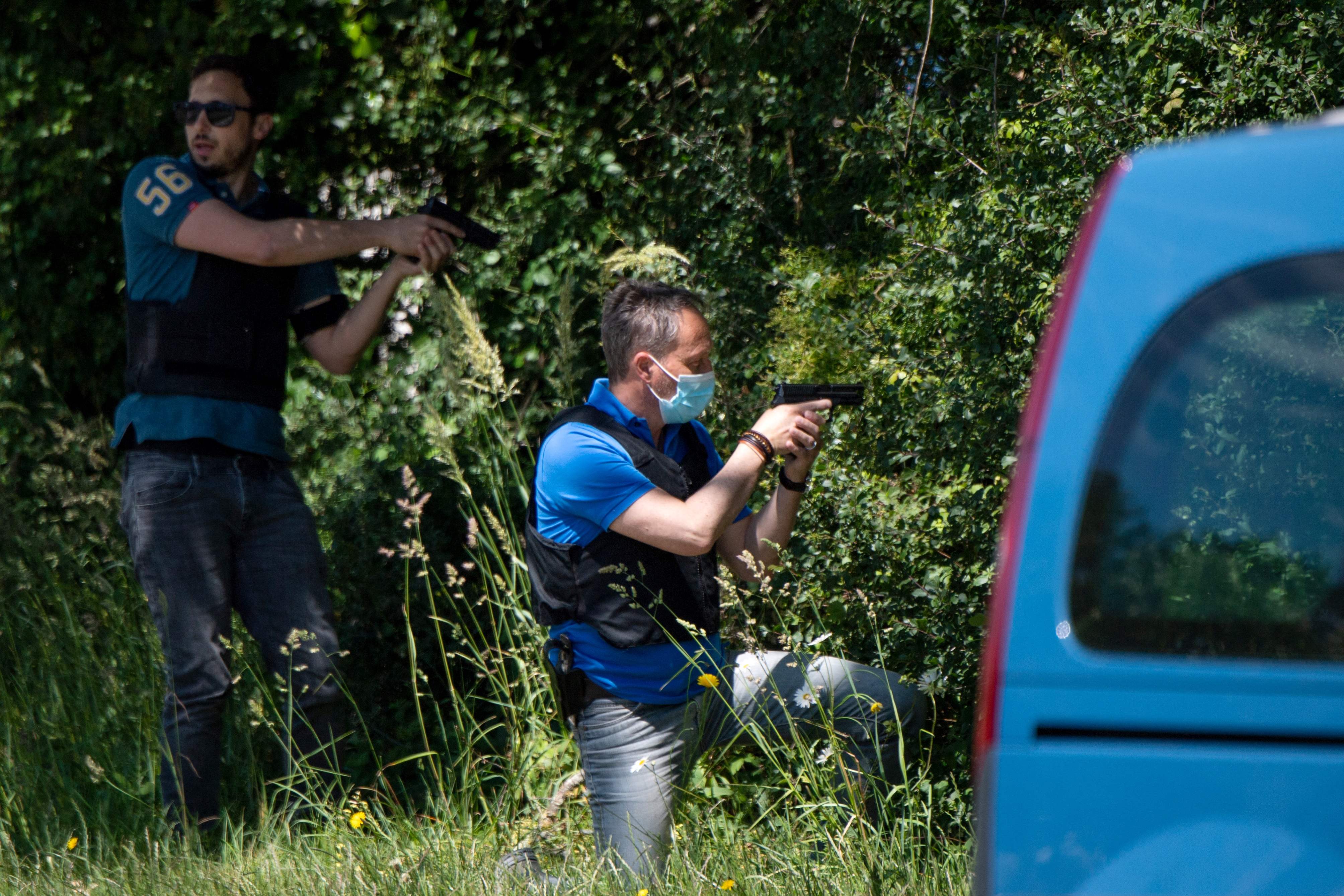 The 36-year-old Tunisian immigrant was also killed by cops in the wake of the attack.

It followed six years of savage Islamist attacks in France, including the beheading of schoolteacher Samuel Paty by a Russian-born terrorist in October last year.

The deadliest single terrorist attack ever in the country came in November 2015 when 130 people were killed in Paris. 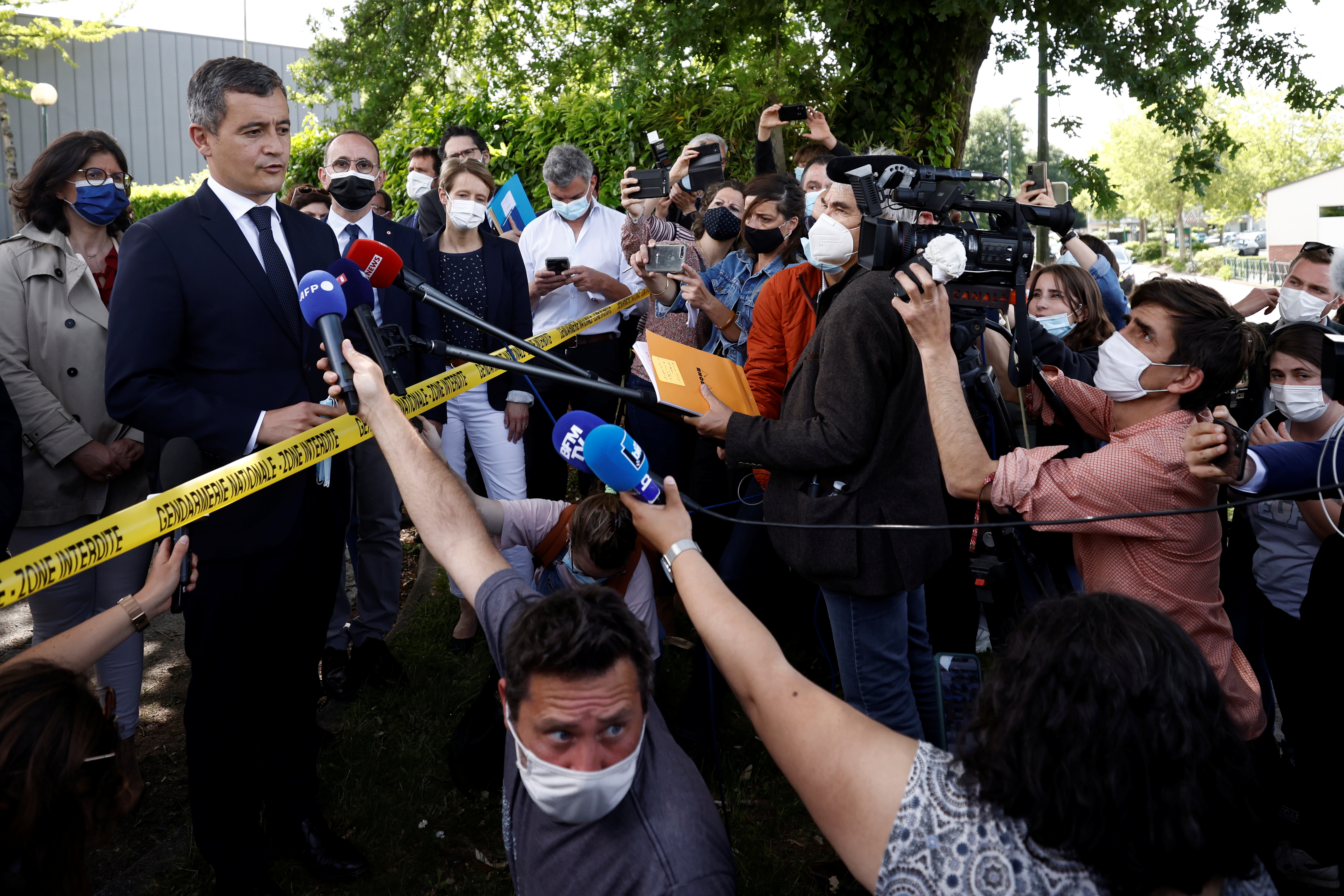 Earlier in the year, two Paris-born gunmen linked to Al-Qaeda broke into the offices of the Charlie Hebdo satirical magazine, leaving 12 dead and 11 wounded.

In July 2016, 86 people were killed and more than 400 injured when a 19-tonne truck was deliberately driven into crowds on the seafront promenade at Nice, in the South of France.

The terrorist turned out to be a radicalised Tunisian immigrant who was shot dead by police.

During the same month, two Isis terrorists murdered an 86-year-old Catholic priest during a church service in Normandy.

There have been frequent knife attacks on the forces of law and order, leading to the deaths of serving police.

In October 2019, a radicalised computer operative working at the Paris Prefecture in central Paris stabbed four of his colleagues to death.

The attacker – who was also shot dead – turned out to be a Muslim convert who kept extremist Al-Qaeda and Islamic State literature and images on his computer.