Freshers’ week on ZOOM: Independent SAGE says first years should be banned from partying next month when universities reopen and ALL students should be routinely tested to stop outbreaks on campuses

Freshers’ week should be moved online to prevent Covid-19 outbreaks when university students go back next month, an independent group of scientists say.

The experts have earmarked campuses as potential super-spreading zones, because young people are more likely to carry the virus without knowing and mingle with strangers.

They say freshers’ week – normally held in mid-September and revolved around partying and drinking – should be banned and held on Zoom calls or Skype chats instead.

Testing should also be carried out before, or as soon as people arrive, on campus, and at regular intervals throughout the day, according to the Independent Sage committee.

The group made a series of drastic recommendations for the higher education sector in a report published today ahead of universities reopening next month.

They are advising universities to make online learning the default option for all subjects rather than in-person lectures. 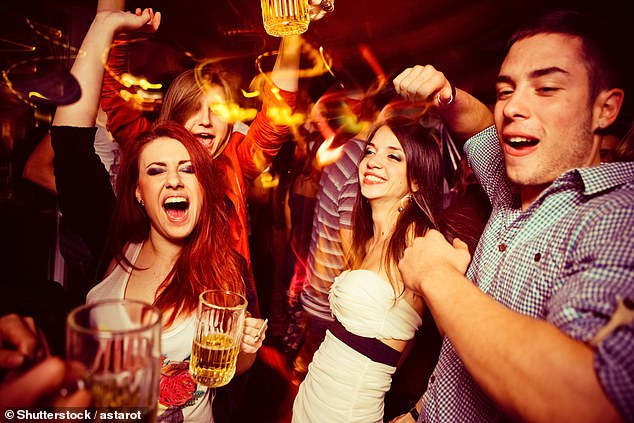 Freshers’ week should be moved online to prevent outbreaks when university students go back next month, according to an independent group of scientists

In June, the University of Cambridge confirmed all ‘face-to-face lectures’ would be moved online during the 2020-21 academic year to ensure social distancing can continue amid the pandemic.

A number of universities across the UK are also planning to offer a blended learning approach – with a mix of online lessons and face-to-face teaching – when they reopen campuses to students in the autumn.

Earlier this month it emerged that universities in the UK will ban parties and overnight stays for students from September as part of their strict social distancing guidelines.

Students who live in households, or ‘bubbles’, will no longer be allowed to mix with their peers from other households and could face ‘disciplinary action’ if they breach the public health measures

It is thought that younger generations have been contributing to recent resurgences of Covid-19 by gathering again for parties, barbecues and holidays amid the easing of lockdown restrictions.

The proportion of those infected aged 15-24 has risen three-fold in about five months, WHO data shows.

The warning comes after the global death toll topped 700,000.

‘Younger people also need to take on board that they have a responsibility,’ said WHO emergencies chief and father-of-three Mike Ryan in an online discussion.

‘Ask yourself the question: do I really need to go to that party?’

Young people are less likely to suffer a severe form of the respiratory disease than their parents or grandparents.

But the proportion of those infected aged 15-24 has risen three-fold in about five months, WHO data shows.

‘It’s tough but it is what is needed to stop the virus,’ he said.

As hundreds of students gear up for the highly-anticipated freshers week, this week the University of the West of England (UWE) in Bristol announced that ‘unacceptable behaviour’ could lead to students being issued with fines.

Meanwhile the University of East Anglia confirmed it too had taken the decision to ban ‘overnight guests’ from outside the student household as the crisis continued to grapple the nation.

Students at University College London and Cambridge have also been banned from having parties or inviting people to stay overnight.

In its report today, Independent SAGE – set up as an alternative to the Government’s Scientific Advisory Group for Emergencies – said teachers who do have to do physical lectures should wear masks and maintain social distance from others.

Oxford University has already made it compulsory for students to wear a face covering in any shared indoor space, including the students’ union and any libraries, unless they had a medical exemption.

Today’s report also suggested forcing students to sign a social behaviour agreement which, if breached, could lead to disciplinary action.

Professor Liz Stokoe, a sociologist and member of Independent SAGE, said: ‘It’s hugely important that universities are re-opened but students will be travelling from all over the country and the world, that will create risks of infection transmission, and so it is essential to put detailed procedures in place so as to guarantee a safe return. This is essential for the welfare of students, of staff and the wider community.

‘It would be disastrous if universities were forced to close as we’ve seen happen in the US so we are urging them to play safe and work with students to mitigate the risks.’

Professor Stokoe and colleagues want universities to provide accommodation where students can go to quarantine if they have the virus or if a close contact tests positive.

They recommended temperature checks at the door of every halls of residence to check students and visitors for the disease.

A Universities UK spokesman told the Guardian that it was already planning to implement some of the recommendations in the report.

They said: ‘Universities are working in partnership with their local authorities, public health bodies and others to ensure that effective and rapid outbreak response plans are in place and clearly understood.

‘This includes ensuring that students or staff showing symptoms of Covid-19 have access to local testing and are supported to self-isolate – and we welcome this report’s focus on the need for clarity about testing for universities.’

Mandatory testing is not included in the Department for Education’s guidance for universities reopening.

A spokeswoman said: ‘The safety of students and staff must be a priority, and we expect universities to make judgments based on the latest public health guidance.’

It comes as younger people have been blamed for contributing to recent resurgences of Covid-19.

The proportion of those infected aged 15-24 has risen three-fold in about five months, World Health Organization (WHO) data shows.

Young people are less likely to fall seriously unwell with Covid or suffer symptoms at all, but they are the most likely group to mingle with others.

Meanwhile, universities are demanding more money in order to cope with taking in extra students following the Government’s U-turn on exams.

The sudden change in policy over exam grades left 55,000 pupils scrambling for places, leaving elite universities facing the prospect of being overwhelmed.

Amid the chaos of the scrapping of the controversial algorithm system used to award grades, students who initially did not meet their offer requirements now have the required marks – and a previous cap on student admissions was also lifted.

Universities have asked for extra financial help so they can ‘scale up’ places for the 2020 and 2021 intake, a source said this week.

Gavin Williamson has urged universities to ‘go above and beyond’ to honour the commitments they have made to students who have been promised places.

There are concerns that this year’s exam chaos could have longer term consequences and spill over into next year, with some high performing students thought to be prepared to defer to get into their university of choice in 2021.

Some 55,000 pupils who were rejected by their first choices had signed up for other institutions – and could now want to return to their desired university if their grades are bumped up by the U-turn.

Roughly 30,000 students accepted a place at their second choice university, while an additional 80,000 are holding out for appeals.

Russell Group universities have asked for more money to take in more students for high-cost subjects like engineering and chemistry.

08/21/2020 World News Comments Off on Freshers' week on ZOOM: Scientists want university parties banned
Recent Posts
We and our partners use cookies on this site to improve our service, perform analytics, personalize advertising, measure advertising performance, and remember website preferences.Ok