Gavin Williamson today said the Government is ‘determined’ that exams and assessments will go ahead in 2021 after a summer of education chaos.

The Education Secretary said he is working with the sector to ensure that the examinations process ‘is done as smoothly as possible’.

He also apologised to students who were caught up in the recent A-level and GCSE results debacle, telling them he was ‘deeply sorry’ for the situation they were put in.

The coronavirus pandemic meant exams were cancelled this year and grades were initially calculated using a controversial algorithm.

That algorithm, designed by regulator Ofqual, was ditched after massive public outcry after 40 per cent of grades were downgraded below teacher estimates.

Grades were then awarded on the basis of teacher predictions as the boss of Ofqual, Sally Collier, subsequently resigned while the permanent secretary at the Department for Education, Jonathan Slater, was sacked.

There were widespread calls for Mr Williamson to carry the can for the fiasco but Boris Johnson has stood by his Education Secretary. 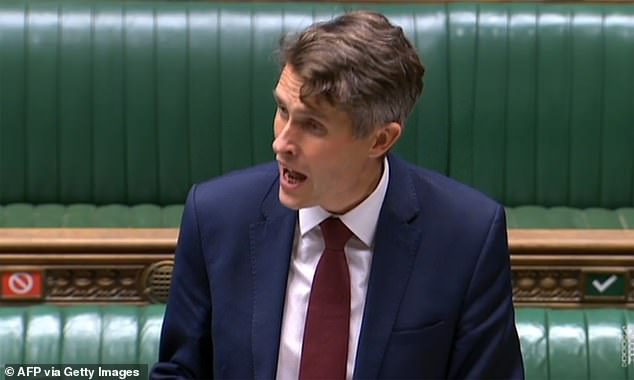 Pupils across England are returning to school this week and Mr Williamson said this afternoon that exams planned for next year will go ahead.

However, question marks do remain over the exact timing of the assessments amid suggestions the normal dates could be slightly pushed back by a couple of months.

Mr Williamson told MPs in the House of Commons: ‘We are determined that exams and assessments will go ahead next year, and we’re working with the sector to ensure that this is done as smoothly as possible.

‘While none of this disruption is what we wanted for our students, I believe that they now have a certainty and reassurance they deserve and will be able to embark on the next exciting phase of their lives.

‘I hope the whole House will join me in wishing all of them the very best for their future.’

Mr Williamson said he was ‘deeply sorry’ to school pupils who had their grades unfairly downgraded across England.

He told the Commons: ‘The independent regulator Ofqual had put in place a system for arriving at grades that was believed to be fair and robust.

‘It became clear, however, that there were far too many inconsistent and unfair outcomes for A and AS-level students, and that it was not reasonable to expect these to be dealt even through a boosted and enhanced appeals process.’

Mr Williamson continued: ‘This situation has, I know, caused a great deal of stress and uncertainty, and I am deeply sorry that those who have borne the brunt of it have been students themselves.

‘I can only apologise to them again for this.’

Mr Williamson also insisted he is ‘confident’ the necessary preparations are in place to ensure a ‘successful return’ for all schools pupils in England.

The Education Secretary said welcoming pupils back this week will be a ‘massive milestone’ for schools.

Mr Williamson said pupils are returning to a ‘safe environment’, telling the Commons: ‘I know that these past few months have been some of the most challenging that schools, parents and, most of all, children have faced.’

09/01/2020 World News Comments Off on Gavin Williamson insists exams WILL go ahead next year
Recent Posts
We and our partners use cookies on this site to improve our service, perform analytics, personalize advertising, measure advertising performance, and remember website preferences.Ok