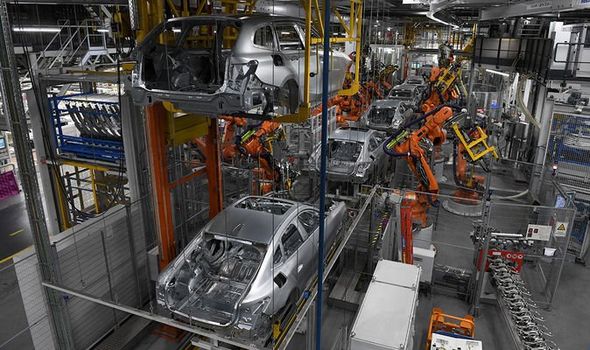 According to the latest figures, Germany fared the worst out of European nations when it came to new vehicles being registered. Britain, meanwhile, fared the best out of major European manufacturing nations.

Figures released by the European Automobile Manufacturers’ Association (Acea) show that, in the EU, only 665,001 vehicles were sold.

Germany recorded a slump of around 35 percent, while Italy saw a drop of 36 percent. France saw a contraction of 31 percent.

However, car sales in the UK only dropped by 25 percent.

While Hyundai and Porsche saw an increase in production, market leaders Volkswagen saw a decline of 42 percent.

Acea said in a statement today (Thursday): “With 665,001 units sold across the region, this was the weakest result in volume terms for a month of October since records began.”

It follows a shortage of semiconductors which hit car production in August and September.

Semiconducting materials are used in electrical devices including microchips.

In the summer, it wreaked havoc with production lines for many items – from smartphones to games consoles.

Sales of used cars increased as new ones came in short supply.

In 2019, the UK was the third largest importer of German cars.

However, in March, the German Federal Statistics Office said German exports to the UK slumped as much as 30 percent following the UK’s withdrawal from the EU.

As the German economy struggles to cope in the wake of the coronavirus pandemic, one financial analyst recently suggested it is becoming the eurozone’s “weakest link”.

Matthew Lynn said in November that the “sheer size” of the German automobile industry – which accounts for around 10 percent of the country’s GDP – has made it “acutely vulnerable” to a slowdown in car sales and a rise in electric vehicle sales.

Mr Lynn forecast that the Euro “will be weak, unstable, inflationary, and constantly devaluing – and that will be a huge change.”

He noted “it doesn’t matter which statistics you look at, the numbers out of Germany have been consistently disappointing.”