Berlin: Germany has officially recognised that its colonial forces committed genocide in Namibia in the early 20th century for the first time, and pledged €1.1 billion ($1.74 billion) of development aid in atonement.

Foreign Minister Heiko Maas late on Friday acknowledged the systematic murder of tens of thousands of men, women and children and the attempted extermination of the Herero and Nama peoples.

“In light of Germany’s historical and moral responsibility, we will ask Namibia and the descendants of the victims for forgiveness,” he said. 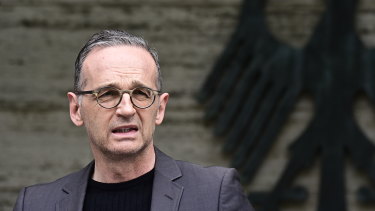 He pledged the development program as a “gesture to recognise the immense suffering inflicted on the victims”.

Historians have long regarded what took place in Namibia between 1904 and 1908 as the first genocide of the 20th century and a precursor to the Holocaust. German colonial forces drove tens of thousands of men, women and children into the Namibian desert to die of starvation and dehydration.

Others were sent to concentration camps where they died of disease and abuse. Many were beheaded and their skulls sent to Germany for scientific experiments. 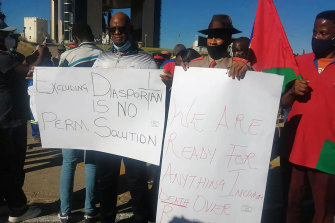 People stage at protest in Windhoek, Namibia on Friday. Credit:AP

The genocide in what was then the colony of German South-West Africa began as an operation to suppress a revolt against foreign rule by the Herero and Nama. But systematic killings continued long after the uprising was put down.

Until recently, it was a subject modern Germany had avoided. While the country has confronted its historic responsibility for the Holocaust, for decades, the genocide of the Herero and Nama was swept under the carpet. It was only in 2004 that a German minister expressed regret for the killings, and in 2016 that Chancellor Angela Merkel’s government referred to them as a genocide.

The announcement, which comes after five years of negotiations with the Namibian government, took the German position even further.

But representatives of the Herero and Nama communities rejected it as insufficient and said Germany should pay reparations.

“We have a problem with that kind of an agreement, which we feel constitutes a complete sellout on the part of the Namibian government,” said Vekuii Rukoro, a Herero chief who tried unsuccessfully to sue Germany over the genocide in a US court.

Many of the genocidal features that would later become synonymous with Nazi Germany were already present in Namibia, including concentration camps, race theory, twisted scientific experiments and mass slaughter. 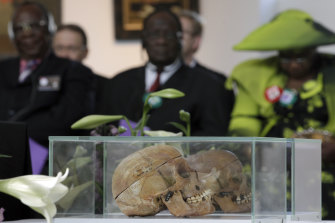 Skulls of Ovaherero and Nama people are displayed during a ceremony attended by tribe representatives in Berlin in 2011. Credit:AP

It is the second former colonial power admission of responsibility for genocide this week. French President Emmanuel Macron on Thursday apologised to the people of Rwanda for France’s failure to stop the 1994 atrocities that killed some 800,000 Tutsis and moderate Hutus.