The Anglesea Bearded Greenhood is out early this year thanks to steady rain in early winter.

This delicate green orchid, which can only be found in the Great Otway National Park, grows close to the ground and is easily missed by the untrained eye.

Up close, the tiny flower resembles a bird with a feathery plume protruding from its belly. 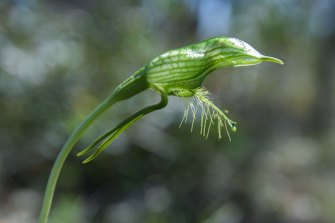 It was supposed to be among the star attractions of the Angair Wildflower Show, which had to be cancelled this year due to COVID-19 restrictions. Instead the event has been replaced with the Angair Nature Show, which is now online and runs until the end of October.

The show aims to promote conservation of the indigenous wildlife in Anglesea and Aireys Inlet.

Angair president Sally White said the flower show traditionally attracted up to 2000 people over a weekend in September with displays of wildflowers (taken from backyards only, never plucked from the wild) and guided walking tours of the bush among the main drawcards.

This year there will be a new photographic exhibition for plant lovers to explore as well as videos about coastal wildlife and jigsaws for children and adults. 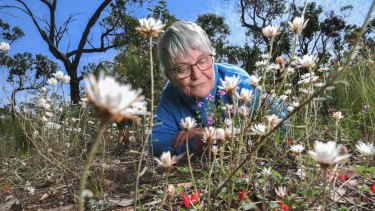 Sally White gets up close to native flowers in Anglesea. Credit:Joe Armao

Ms White said the nature show also aimed to educate people about the extraordinary environment in the coastal hinterland. She believed that is particularly important now with more people moving from Melbourne to regional areas, putting greater pressure on plant life.

“It’s about learning to walk lightly and live with nature gently,” she said.

The Great Otway National Park is home to more than 700 plant species – some of which are endemic.

Roughly a quarter of Victoria’s plant species can be found in the region, including more than 80 orchid varieties. 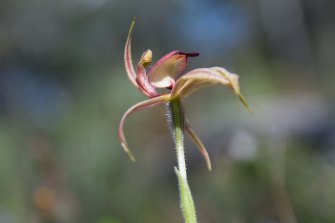 There are duck-shaped orchids while others resemble hearts, birds’ beaks and spiders.

“I love the donkey orchids because they’re so cheerful with their great big yellow ears,” Ms White said. “All of the orchids are very delicate. They’re not like those big blooming orchids you get in the tropics. They’re small, but they’re amazingly different in their varieties.”

Much of the colour in the bushland at Anglesea and Aireys Inlet lies close to the ground.

Angair committee member Ellinor Campbell said the orchids can be particularly difficult to spot. She suggests adjusting your eyes to search for the small details. 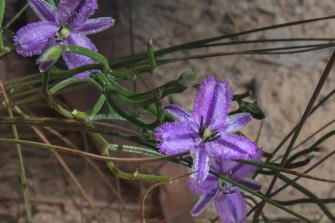 “We call it getting your orchid eye in. You’re looking down,” she said. “You’re looking for small things – there’s something there.”

Surf Coast Shire councillor Mike Bodsworth, who represents Anglesea, said the presence of such immense variety of wildlife was a source of pride for the local community.

“For local people and visitors it’s super important they understand the tiny little things that are there,” he said. “It’s so easy to crush them.” 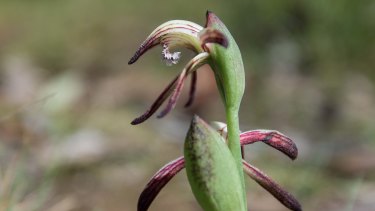 But there is much more to the Otway bushland than orchids. There are Grass Trees with needle leaves and a brush-like spike that grows through the centre of the plant, blue Love Creeper flowers that wrap their vines around other plants and Twining Fringe lilies whose flowers last only for a day.

But most of all, Ms White loves the robustness of the bushland in the region and its tenacious capacity to survive adversity, such as bushfires.

She says we can draw strength from the resilience of Australia’s flora and use it to help us survive the pandemic.

“You just put your roots down in the ground and say ‘next year’.”

Dr Reiter, a native orchid expert, said most Australian orchids required a specific fungi to germinate and were often only pollinated by a particular insect species.

“Usually our spider orchids have relationships with Australian native wasps,” she said. “Usually it’s one wasp to one orchid.”

Orchids can also herald the arrival of spring but they flower for just a short time.

“They might flower for four or six weeks and that’s it. They’re gone until next year.”

09/11/2021 World News Comments Off on ‘Getting your orchid eye in’: All a bloom as Anglesea puts on a dazzling display
Recent Posts