They trained together, served together and jumped out over enemy territory together. Within hours, they died side by side.

So it is entirely fitting that Glen, the parachuting dog, will now join his heroic handler, Emile Corteil of the Parachute Regiment, as part of the magnificent new memorial to the 22,442 British servicemen and women who were killed during the liberation of France in 1944.

In a move that has been warmly welcomed by veterans, a designated area of the new 50-acre Normandy Memorial site will be dedicated to the animals killed in action that summer. 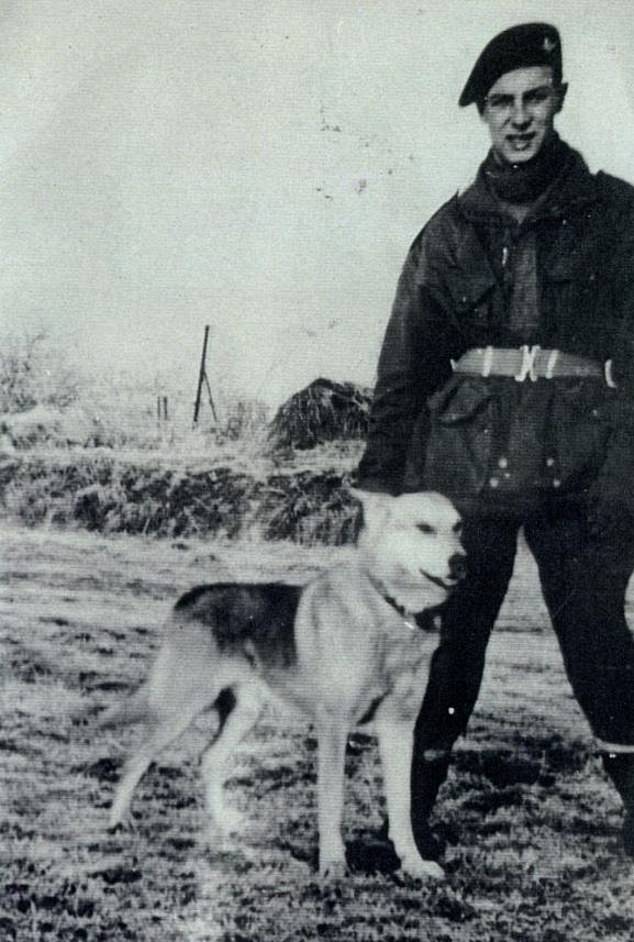 A parachuting dog, horses and carrier pigeons that fought in World War Two will be honoured by a new memorial in Normandy. (Pictured) Dog, Glen, is going to be remembered with his handler Emile Corteil. In the above image they are shown together

As well as Glen, the ‘paradog’ of 9 Para, this spot will include mention of the horses and the carrier pigeons which transported vital messages back across the Channel. Next week, veterans and world leaders will gather at dawn on the 75th anniversary of D-Day to inaugurate the memorial at the very spot where tens of thousands of British troops came ashore in 1944.

Supported by the generosity of Daily Mail readers, the project has captured hearts around the world (though funds are still urgently needed). Until now, Britain has had no national memorial in Normandy.

To be certain that all the appropriate names are included, an expert panel has rigorously researched the Roll of Honour. But then came a question which stumped them all: What about Glen?

Walk through the stunning Commonwealth cemetery at Ranville, where 2,400 men lie buried, and there is one grave which always stops visitors in their tracks. It is that of 19-year-old Private Emile Corteil from Watford, who was killed during the first phase of D-Day.

His headstone is engraved with a particularly poignant inscription, chosen by Emile’s heartbroken mother, Jessie: ‘Had you known our boy you would have loved him too. “Glen” his paratroop dog was killed with him.’ 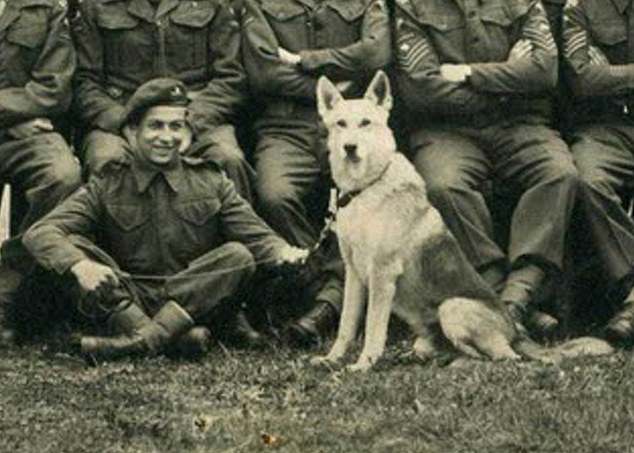 Emile Corteil and dog Glen, pictured. Both completed their parachute descent on D-Day but Emile was killed later that day and Glen died at his side 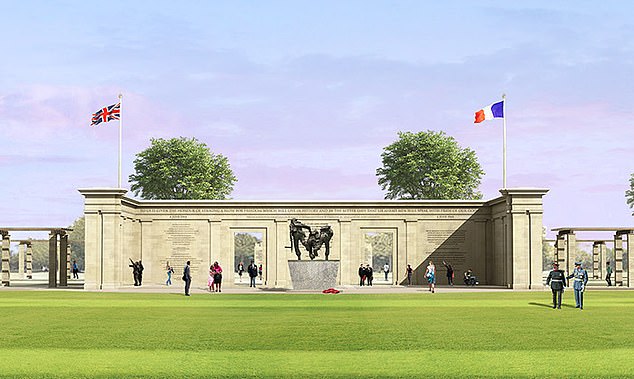 Next week, veterans and world leaders will gather at dawn on the 75th anniversary of D-Day to inaugurate the memorial at the very spot where tens of thousands of British troops came ashore in 1944 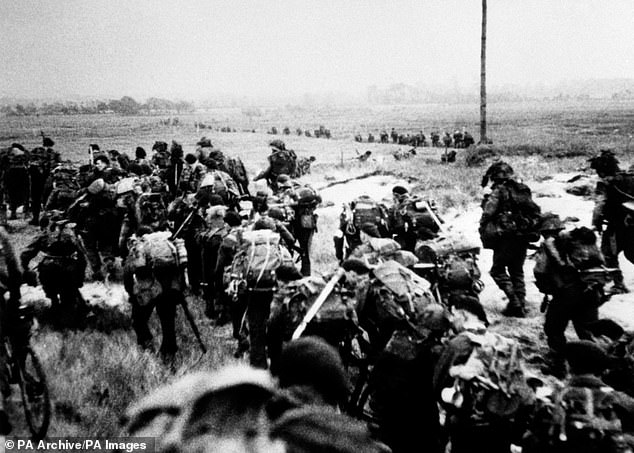 In a move that has been warmly welcomed by veterans, a designated area of the new 50-acre Normandy Memorial site will be dedicated to the animals killed in action that summer. (Pictured) Royal Marine Commandos move off Normandy beaches during an inland advance

What the inscription does not reveal – for it was a serious breach of military rules – is that Glen is actually in the same grave.

So it would have been rather unfair if Emile were to be included on the new memorial with no reference of any sort to the gallant Glen. As a result, the trustees for the memorial – who include the former head of the Army, Lord Dannatt – have agreed that Glen should be acknowledged on a memorial stone in the wildflower meadow alongside the main memorial.

‘Long-term, the trust wishes to recognise the sacrifice of all animals taken in to battle with the British Forces,’ says a spokesman.

The news has gone down well with the veterans. ‘It’s entirely right that there’s a separate memorial for the animals lost in Normandy,’ says Tony Rampling, 93, who landed on Gold Beach with the Reconnaissance Regiment. ‘The sacrifice was huge.’

He is still troubled by the memory of his own painful attempt to despatch a badly wounded horse, using his Sten gun, at a crossroads near Falaise.

Glen’s inclusion will certainly please the veterans of the Parachute Regiment who suffered heavy losses defending the eastern flank of the invasion, following the capture of Pegasus Bridge. 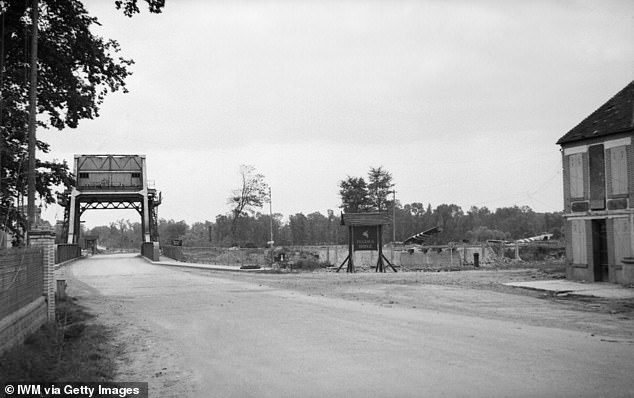 A view of the ‘Pegasus Bridge’ over the Caen Canal, Benouville, in 1944. Two Horsa gliders that brought the ‘coup de main’ force in on the night of D-Day can be seen in the background 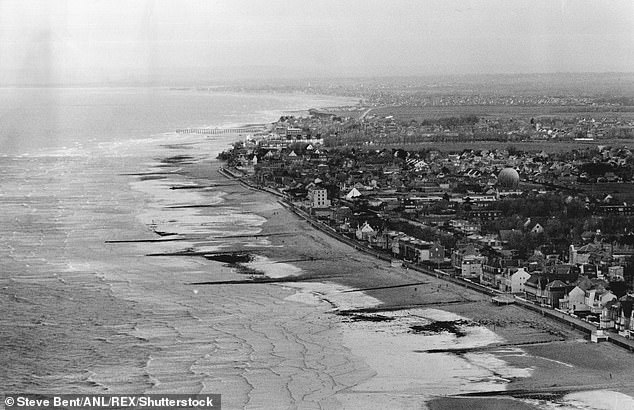 Until now, Britain has had no national memorial in Normandy. (Pictured) Juno beach in Normandy where allied forces landed on D-Day.

‘Paradogs’ were inseparable from their handlers. Though they would jump separately – in the same harness used for dropping bicylces – they were even trained to spread themselves across the parachute on landing to prevent it blowing away.

On being released, their roles would include flushing out the enemy, sniffing out mines and unexploded ordnance, finding wounded soldiers and carrying messages. They were also a huge boost to morale.

Emile and Glen were with a group of soldiers from 9 Para who had been dropped off-course in the middle of the night and were attempting to regroup with their unit for the famous attack on the Merville Battery on the morning of D-Day. Tragically, an RAF patrol mistook them for Germans. The bodies of Emile and Glen were later found together in a bomb crater, Emile still holding Glen by the lead.

They were taken for burial in Ranville where there was touching twist to the story. According to Mark Worthington, curator of Normandy’s Pegasus Memorial Museum, a furious row broke out. ‘Emile was being buried by his comrade, Gordon Newton of 9 Para. Gordon himself later told me what happened next,’ says Mr Worthington.