The grim state of the public finances was laid bare today as the Covid surge and Omicron variant hammers the economy.

Government borrowing came in above expectations at £17.4billion – only £4.9billion below last year and the second highest on record.

Meanwhile, the country’s debt pile had reached £2.32trillion by the end of the month – equivalent to 96.1 per cent of GDP, the worst ratio since 1963.

The bleak picture comes amid mounting fears that the resurgence of the virus has derailed the recovery. 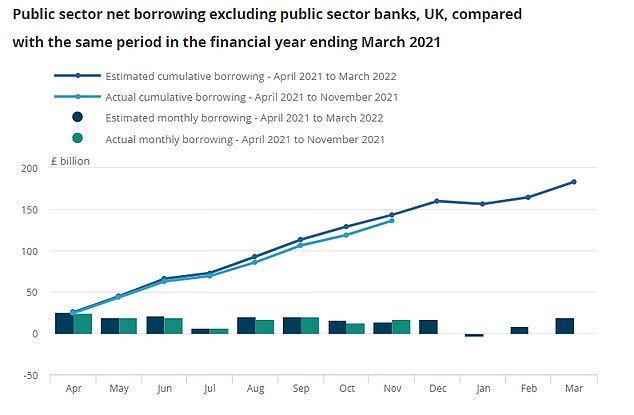 Government borrowing came in above expectations at £17.4billion – only £4.9billion below last year and the second highest on record

Worryingly, inflation is still surging and forcing the Bank of England to raise interest rates – raising the prospect of so-called ‘stagflation’.

For the first time this year borrowing was higher than the estimates produced by the Office for Budget Responsibility, which had pencilled in a figure of £14.2billion for November.

Paul Johnson, director of the respect IFS think-tank, said this morning that while the Treasury was still able to borrow Rishi Sunak would be worried about the ‘medium term’ and how support could be targeted.

Boris Johnson last night stepped back from imposing punitive lockdown curbs that would have ruined Christmas.

In a lengthy Cabinet meeting yesterday, several ministers including the Chancellor are said to have called for ‘incontrovertible evidence’ on the Omicron variant before signing off on any further measures.

Cabinet sources said it was now ‘almost certain’ that fresh restrictions would not be brought in before December 25.

But fears are growing that after Christmas different households could be banned from socialising indoors – and pubs and restaurants forced to serve outside – spoiling New Year for millions of families.

With plans for the two-week ‘circuit breaker’ still said to be on the table, Mr Johnson last night warned he had to ‘reserve the possibility’ of further restrictions to control the spread of Omicron. However he admitted the data was not clear enough to justify action now.