A huge rumble and a belch of steam and rocks erupts from the crater of the volcano that towers above us.

It’s truly terrifying feeling such power, so near.

I looked about me, wondering where I would I hide if the volcano’s eruptions suddenly intensified. And then I realised – and it’s obvious really – there is nowhere to run and hide. 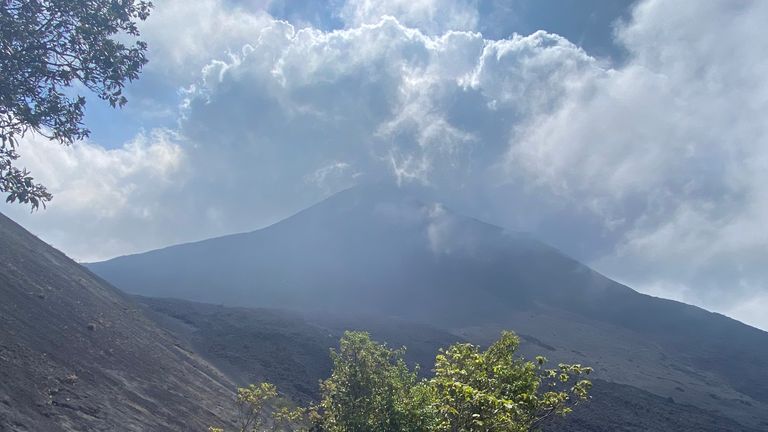 Up here, perched high on the side of Guatemala’s Pacaya volcano, at the closest monitoring point to the peak of the volcano, one feels very insignificant.

To my right, away from the belching crater, a vast lava field plummets towards the valley floor and, in the distance, the towns and villages directly in its path.

Our guide, volcano park ranger Alexander Rodas, who had joined us as we hiked our way to the overwatch position, confirmed my worst suspicions: if things go bad, we aren’t surviving.

“The gases, the wind, the rocks, the lava, no chance of survival,” he said.

“But it is okay! It’s quiet,” he added – as another boom shuddered through my own, non-volcanic core.

It had taken considerable negotiation to get up here, and now I just wanted to get off the mountain. 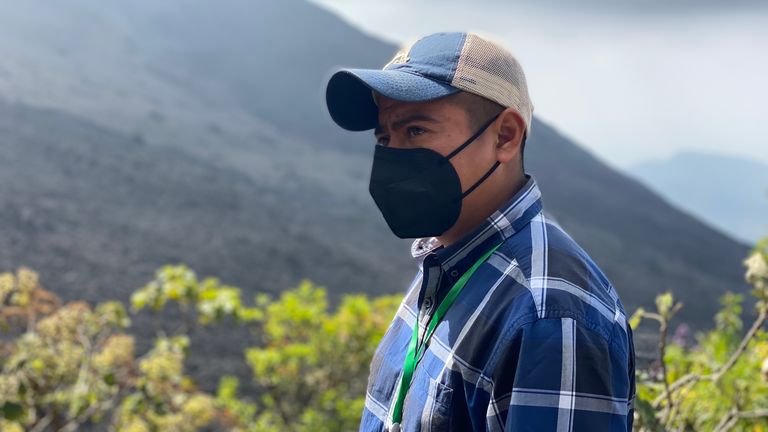 Guatemala says that three of its most active volcanoes are erupting at the same time.

It has happened many times before – but in 2018, the last time, hundreds died when their communities were engulfed by billions of tonnes of water, sand and rock. Hence the concern amongst the many experts who are based here.

The country is used to this the type of thing. It has over 30 active volcanoes, but the three at once phenomenon is never good.

For the last five days or so, we have travelled between the Pacaya and Fuego volcanoes. Fuego means fire – and it takes no time to realise why.

It belches the steam like the others, but it also sends cascading plumes of molten lava high into the sky on a disturbingly regular basis. 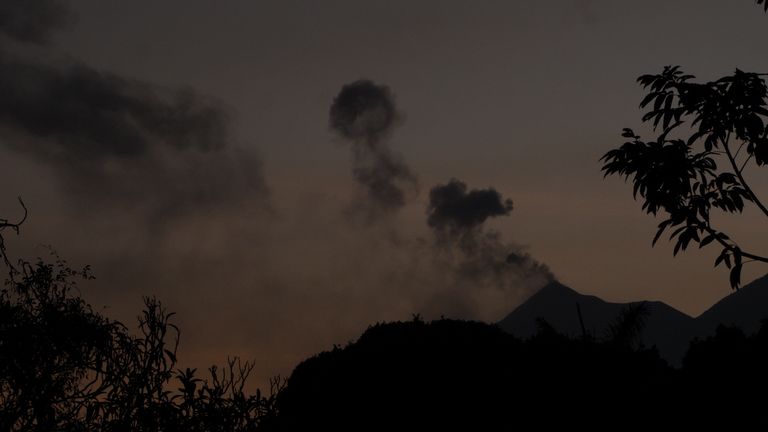 It makes a huge amount of noise – a noise that wakes me in my hotel room absolutely miles away, and scares me rigid when I am beneath it talking to the communities who live in its shadow.

But both of these volcanoes are showing disturbing tendencies.

At night, we watched as Pacaya also belched fire and lava, and huge streams of molten lava poured from a fissure hundreds of metres long down one of its sides.

“Pacaya has increased its activity in the last few days, in the afternoon and evening we see eruptions sometimes up to 500m (1,640ft), putting the population in danger,” my guide Alexander explained.

“The volcano has been increasingly active, and we are all worried.

“It’s possible to monitor and predict an eruption two or three days before depending on the number of explosions. If there is more than an average of 80 to 100 explosions per minute, it’s a warning a major eruption might be imminent.

“At the moment the volcano is at 30 to 40 per minute… that is moderate to strong.” 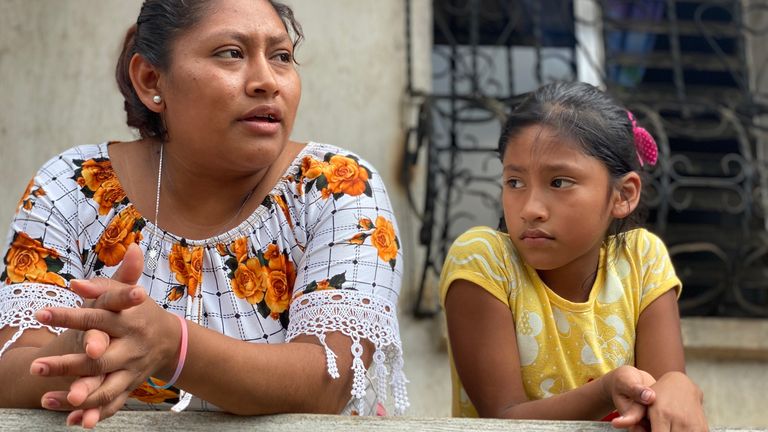 Whole communities live in the shadows of these volcanoes – with more than 180,000 people around Volcan de Fuego.

Most of the time the volcanoes are clear to view, but as we visited, as they belched away, the grey ash, steam and cloud filled skies hid Fuego from our sights, but we could hear it all the time.

The people who live here are really, really scared – they just don’t have an option to move.

Lendy Salan says not only does she not have money to go anywhere else, but she says they’d be trapped by the lava anyway if the volcano erupts.

“On this side, there are two or three rivers, so when something like this happens it flows into the river, when the time comes to leave we can’t because we’re stuck here.”

Their only option would be to head for higher ground.

“If it happens we can’t leave, we have to go up into the hills, because the cemetery is high up, lots of people go to the cemetery – it’s the only place.” 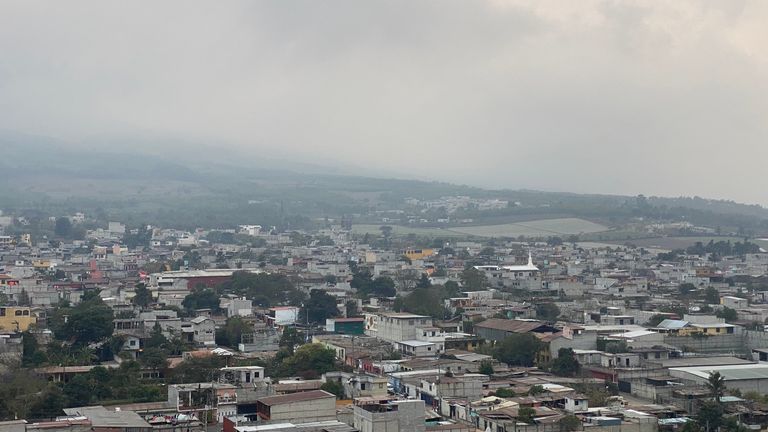 Just getting off the volcano in a hurry would be a virtual impossibility.

The roads between the communities are mud and volcanic rock. They are steep and winding and incredibly difficult to drive along.

Nobody I spoke to has any faith in the government’s emergency evacuation plans. In fact, they don’t think they really exist anyway.

“It’s beautiful to look at but at the same time it’s scary… we are completed neglected by the government,” Edwin Barrera told me.

The government has offered voluntary evacuation notices to the local communities, but there is scant evidence that shelters have been prepared for people to arrive. 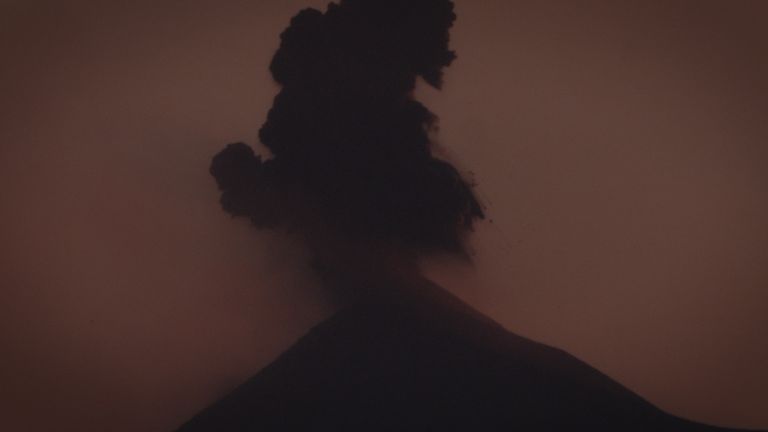 In past disasters, the families who have evacuated their villages left the men behind working shifts to protect the villages from looting.

It means that the main breadwinner is terribly exposed – and if they die, the family is in an even worse position. It’s a terrible conundrum for all of the people living in the shadow of these volcanoes.

In essence their predicament is no different to my initial concerns high up on the volcano.

What to do if it goes really bad? In truth, for these people, there is nowhere to run and nowhere to hide.

02/19/2021 World News Comments Off on Guatemala: There’s nowhere to hide – hundreds of thousands live in the shadow of three erupting volcanoes
Recent Posts