A senior British health adviser has been accused of pushing ‘dodgy data’ that exaggerated the potential risk of the Omicron Covid-19 variant.

It is understood that Dr Jenny Harries was the source behind Health Secretary Sajid Javid’s contested claim that there is typically a 17-day lag between infection and possible hospitalisation when someone is infected with Omicron.

However, other experts have disputed this, pointing to data from the Office for National Statistics (ONS) that suggests an average delay of nine or 10 days.

The claim by Mr Javid was used to strengthen the case for more Covid measures, and the lag suggested the country was on the brink of a significant spike in Omicron hospitalisations that was – at the time – yet to be felt, according to The Sunday Telegraph.

Dr Harries, the chief executive of the UK Health Security Agency (UKHSA), has previously claimed that Omicron was ‘probably the most significant threat we’ve had since the start of the pandemic’. 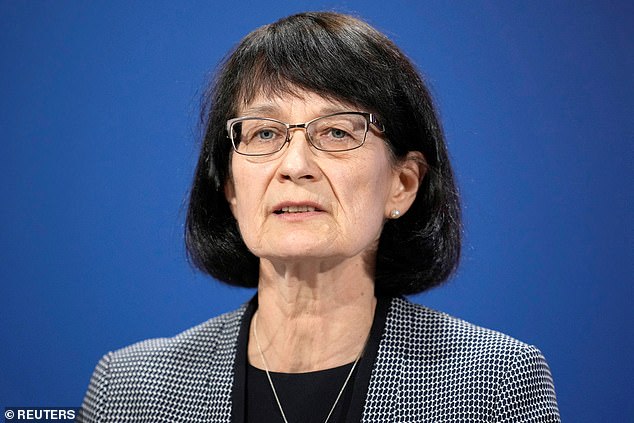 It is understood that Dr Jenny Harries (pictured in May, file photo) was the source behind Health Secretary Sajid Javid’s contested claim that there is typically a 17-day lag between infection and possible hospitalisation when someone is infected with Omicron

The government’s scientific advisers have been calling for lockdown measures to be introduced, with Prime Minister Boris Johnson currently deciding whether to impose more restrictions before the New Year, or hold off for longer.

Javid’s claim came as SAGE, the government’s scientific advisory body, released modelling that claimed imposing restrictions on social contact through to the end of March would reduce Covid-19 deaths significantly.

However, while cases were soaring at the time of Javid’s claim last weekend due to Omicron, just 85 people were in hospital with a confirmed case of the Omicron variant. This figure has since risen to 366.

According to government sources cited by The Sunday Telegraph, new lockdown measures before the new year are now unlikely based on the latest data and mounting opposition from Conservative MPs.

Former Treasury statistician told the Sunday Telegraph that the 17-day figure appeared to either be a result of a ‘deliberate statistical sleight of hand designed to deceive, or incompetence’.

If it was deliberate, he said it seemed officials were ‘in effect trying to buy time as officials realise that data of rising hospitalisations is needed to justify lockdown’.

Mark Harper, the chairman of the Covid Recovery Group, told the newspaper: ‘Covid restrictions damage people’s lives, livelihoods and mental wellbeing. So it’s really important that the debate about them is based on solid data.

‘Serious questions need to be asked if senior health advisers are furnishing ministers with misleading figures, and failing to correct them at the earliest opportunity.’

The accusations came after a further 122,186 lab-confirmed Covid-19 cases were recorded in the UK as of 9am on Christmas Eve, another daily record, while 137 people had died within 28 days of testing positive 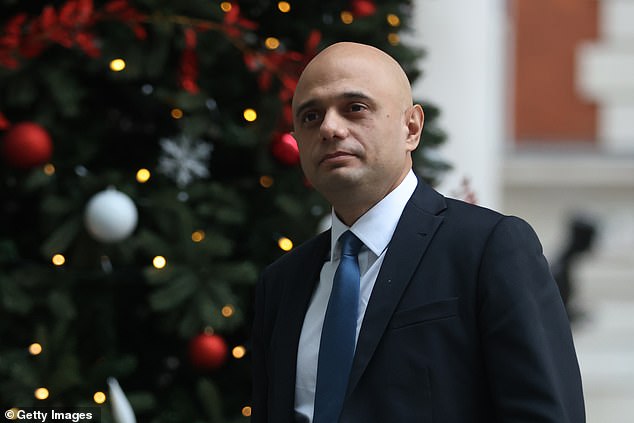 The 17-day leg claim by Sajid Javid was used to strengthen the case for more Covid measures, and the lag suggested the country was on the brink of a significant spike in Omicron hospitalisations that was – at the time – yet to be felt, according to The Sunday Telegraph 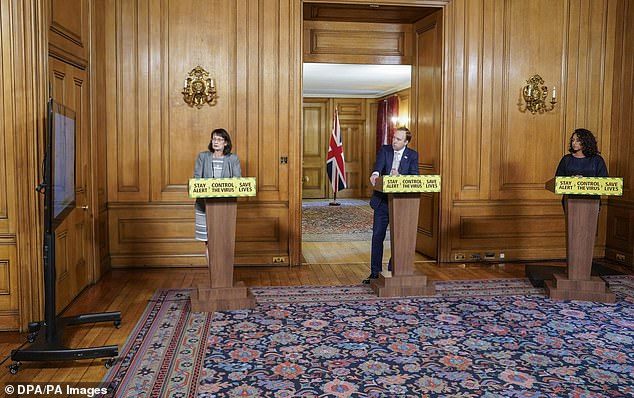 The threat posed by the Omicron wave was underlined by a ‘sobering’ Office for National Statistics (ONS) estimate that 1.7 million people in the UK had Covid-19 in the week ending December 19, the highest number since comparable figures began in autumn 2020.

National statistician Sir Ian Diamond said that while there was some evidence people were engaging in ‘safer behaviour’ it was ‘far too early to suggest that we will see anything other than a continued rise’ in future weeks.

But Dr Harries said there was a ‘glimmer of Christmas hope’ in data published on Thursday suggesting the Omicron strain might cause less severe illness than the previously dominant Delta variant.

The UKHSA data has fuelled speculation in Westminster that Boris Johnson will resist imposing further restrictions in England after Christmas.

In Scotland, nightclubs will close for at least three weeks from December 27 as part of a package of measures to control the spread of the virus, while clubs in Wales and Northern Ireland will close from Boxing Day.

But in England, the Government may choose to issue new voluntary guidance on limiting contacts rather than risk another damaging Tory rebellion by recalling Parliament to impose new rules.

The Prime Minister has indicated he will not hesitate to act after Christmas if required, with Monday expected to be the first opportunity for ministers to consider whether changes are needed beyond the existing Plan B measures.

Asked whether the Government will have the information by then to make key decisions, Dr Harries told the BBC: ‘Ministers will look at all of the data that we have available and that isn’t simply what the epidemiology is saying, it’s how it’s impacting society.’ 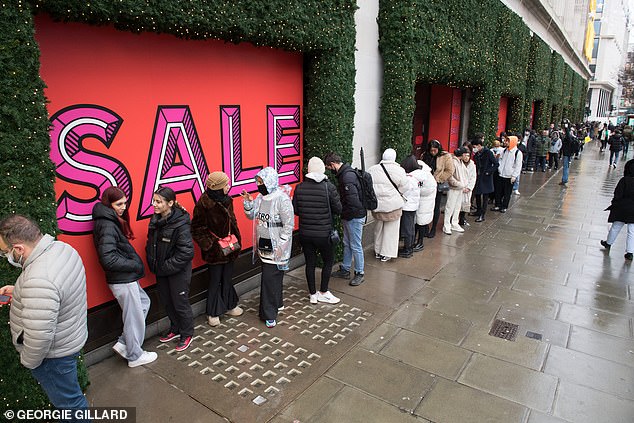 People queue for the Selfridges sale on London’s Oxford Street  as the store opens at 11am to welcome shoppers. Around 1 in 10 people in London were likely infected with COVID-19 on Sunday, according to new official estimates that underlined the relentless advance of the Omicron variant of coronavirus

Her comments reflect concerns about the high rate of staff absence across the NHS and key public services as a result of the rapid spread of Omicron.

Currently, 3,285 NHS staff are off sick, double the number at the end of November, while the Scottish Ambulance Service has reported 243 absences – which is more than three percent of its workforce. Out of the Scottish Fire and Rescue Service’s workforce of 8,200, 352 staff were off due to Covid.

Across the border, NHS England published data that showed the number of staff days lost due to Covid-19 hit 124,855 last week – a 38 percent increase from the 90,277 lost days reported the week before.

One NHS leader said the health service was now facing ‘a double emergency’ of growing Covid-19 hospitalisations and staff shortages, according to The Guardian.

‘These figures show how Omicron is having a tangible real-time impact on a service that was already operating beyond full stretch. This is a big worry for trust leaders,’ Chris Hopson, the chief executive of NHS Providers told the newspaper.

‘Absences due to Covid-19 are up nearly 40% and with community infections surging ahead, that figure may well get worse before it gets better.’

In London hospital trusts, Covid staff sickness rose by 122 percent in a week, with the capital reporting more Omicron cases than anywhere else in England.

Across London, 3,874 NHS staff were off sick on Sunday December 19, more than double the 1,540 reported a week earlier.

New official estimates said around 1 in 10 people in London were likely infected with COVID-19 on Sunday, underlining the relentless advance of the variant.

The Government’s Scientific Advisory Group for Emergencies (Sage) panel has examined modelling looking at the impact of new restrictions lasting for up to three months.

The Warwick University model looked at a return to Step 2 of the Government’s road map – including banning indoor mixing of households, with the rule of six outdoors – from either December 28 or January 1, lasting until January 15, 28 or March 28.

A paper produced by the Spi-M-O modelling panel for Sage said: ‘Rapidly enacted Step 2 measures reduce the peak of hospital pressure to about half its level under Plan B only.’

Minutes of a Sage meeting from December 23 said: ‘The earlier interventions happen, and the more stringent they are, the more likely they are to be effective.’

The Warwick modelling has not been examined by ministers, who are waiting for more data before making any decisions on what – if any – extra steps may be needed.