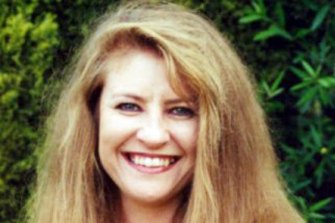 The summer months in Bathurst are usually uneventful as the university students who are the lifeblood of the NSW Central Tablelands town head for home, emptying out from pubs and share houses.

Janine Vaughan – a pretty and vivacious shopkeeper with a trademark mop of blonde hair – had vanished after a night out. As rain pounded down on Keppel Street, the 31-year-old stepped into a red car and was never seen again.

Within days, police feared the worst. Homicide detectives were dispatched from Sydney to Bathurst, interviewing dozens of witnesses, making pleas to the public for information and swarming over the rugged countryside in the hunt for clues. 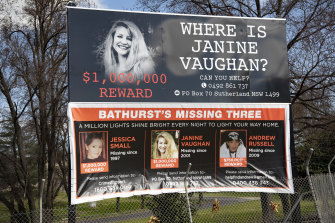 Two decades later, the identity of the car’s driver remains elusive. Three police strike forces, a coronial inquest and a police integrity commission inquiry have all raked over the case, but failed to unravel the mystery.

Now, an eight-month investigation by The Sydney Morning Herald has unearthed compelling new lines of inquiry that appear to have been missed in the long-running murder probe.

Multiple new witnesses tracked down by the Herald have spoken for the first time of a foul smell, buzzing sound and plague of insects around the time of Janine’s disappearance at a property connected to one of the police’s 47 persons of interest.

The Herald has also uncovered the existence of a hidden cellar within metres of the spot where the odour and insects were identified.

Past associates of the person of interest described troubling encounters with him.

The identity of the person of interest cannot be published for legal reasons, but the Herald has shared the findings of its investigation with detectives assigned to the cold case.

NSW Police did not respond to the Herald’s detailed questions about whether they have ever searched the property or intend to do so in the future on the basis of the new information.

However, the new witnesses confirmed they had been contacted and interviewed by detectives for the first time in recent weeks after the Herald passed their details to police.

In late 2001, Janine Vaughan was managing the Ed Harry menswear store in Bathurst, 200 kilometres west of Sydney. The immaculately put together shopkeeper was warm, funny and unpretentious. Customers immediately felt at ease around her.

Janine was a relative newcomer to the town, having relocated there from her hometown of Muswellbrook in 1998 to move in with her then boyfriend. 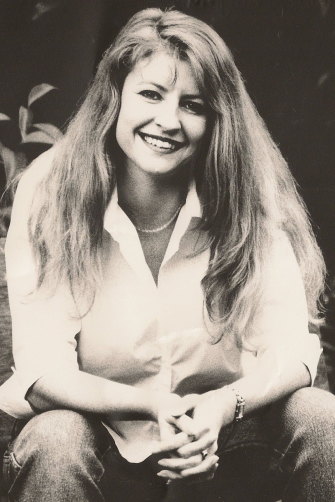 Customers immediately felt at ease around Janine Vaughan, a pretty and vivacious shopkeeper with a trademark mop of blonde hair.

Janine’s otherwise happy childhood – in a loving household with extended family – was marred by her estrangement from her biological mother, who abandoned her at birth.

By early adulthood, Janine yearned to settle down and form a family of her own. She felt adrift after her relationship broke down in 2000.

She flung herself back into Bathurst’s social scene, spending the night of Thursday, December 6, 2001, drinking and dancing with friends Jordan Morris and Wonita Murphy.

At 3.47am on Friday, revellers spilled out of the Metro Tavern, the trio among them.

CCTV footage captured a lover’s quarrel between Jordan and Wonita, while Janine was visibly distressed after losing her handbag. 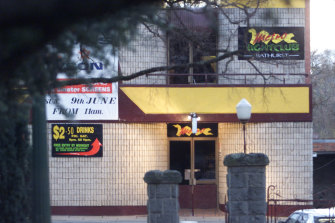 The Metro Tavern in Bathurst in 2001, where Janine Vaughan visited moments before she disappeared. Credit:Simon Alekna

However, Janine rallied the group to push on to the nearby Oxford Hotel, a few blocks away, for a last round of drinks.

As Janine strode 40 metres ahead of the bickering couple onto Keppel Street, a drizzle of rain became a downpour.

A car appeared, performing a U-turn before pulling alongside Janine, who entered and was never seen again.

Grainy CCTV footage indicated the car stopped for around 27 seconds, while multiple eyewitnesses recall it was red.

Family insist Janine was security conscious and wouldn’t have entered the vehicle unless familiar with the driver.

The alarm was raised when Janine failed to open the menswear store on Friday morning.

Locals were warned her disappearance could be at the hands of a serial attacker, following a string of unsettling incidents around town.

Three police strike forces – Toko, Mountbatten and Toko II – have investigated Janine’s disappearance, the last of which is still actively pursuing the case.

The investigation by the first team, Strike Force Toko, began to lose momentum after the first six months.

Its lead investigators, Inspector Paul Jacob and Senior Constable Ritchie Sim, were frustrated at “delays, the fragmentation of resources and the lack of progress” including cancelled trips to Bathurst, a police integrity commission report noted.

“The investigation appears to have been initially well resourced but as time went on resources were deployed to other investigations,” the report said. “The lack of resources contributed to the lack of progress.”

The investigation was diverted in 2005 to deal with allegations that a local detective had shown a romantic interest in Janine before leading the investigation into her suspected murder.

Multiple inquiries exonerated him of involvement and Strike Force Mountbatten was formed in late 2006 to “resume the investigation”. 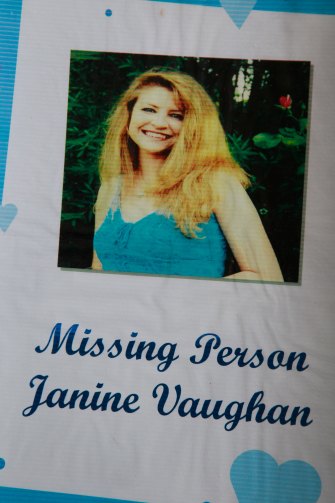 A list of searches it conducted, obtained by the Herald, showed it looked extensively around Bathurst for Janine’s remains – however, the person of interest’s property is not included on the list.

“We’ve had to reinterview people again, there has been a fair element of contamination of content in statements,” he said at the inquest in 2009.

The same year, state coroner Mary Jerram said she feared the trail had “gone cold” as she handed down a finding that Janine was murdered by a person or persons unknown.

All three of the persons of interest named at the inquest have denied responsibility for Janine’s disappearance and were cleared of any involvement by Ms Jerram.

The Herald has since delved into the past of one of the original 47 persons of interest presented by police to Ms Jerram.

The investigation tracked down dozens of witnesses who knew the person of interest, worked with him or who had been to his property, many of whom now live interstate and have never spoken to police before.

Two witnesses still had vivid recollections of strange happenings at or within metres of the person of interest’s residence between late 2001 and 2002, the same period in which Janine vanished. 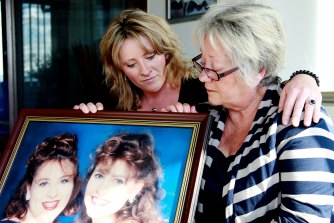 They did not want their identities disclosed over concerns for their personal safety.

One man described a “horrendous odour” in an indoor area that lasted for at least several weeks.

“I distinctly remember saying this place stinks,” the man recalled. He said the smell was accompanied by a “beehive” sound.

“There was a lot of buzzing,” said the man, who formerly lived on a farm. “Surely a dead animal wouldn’t be large enough to draw that many flies.”

During a visit to the residence the witness noticed something unusual written on the person of interest’s fridge and quizzed him about it. Details cannot be published for legal reasons.

A woman who came to the property in early 2002 did not recall a smell. However, she pinpointed the same area where the smell had been as being “insanely full” of insects at the time. They looked like bees or wasps, she recalled.

“I distinctly remember saying this place stinks. There was a lot of buzzing. Surely a dead animal wouldn’t be large enough to draw that many flies.”

None of the insects were flying around; but hundreds of them were crawling all over the floor or “laying there dying”.

“I’d sweep them up and go back and then there would be a hundred more,” she said.

“At first glance it looked like they were all dead but if you looked closely, they were still running their legs,” the woman recalled.

The woman said the infestation lasted for months.

The Herald put the witness’s account to internationally renowned forensic biologist Dr Paola Magni, who is based at Murdoch University in Western Australia and acts as an expert witness in homicide cases.

Dr Magni said it was possible that what the woman had observed was two species of hoverflies that can be found at the site of decaying corpses and bear a striking resemblance to bees or wasps. 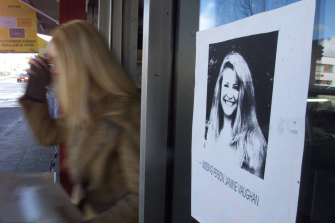 A missing person sign for Janine Vaughan in the window of a sandwich shop in Bathurst.Credit:Simon Alekna

“So they are actually black and yellow, they really look like wasps,” Dr Magni said of the species, Eristalis tenax and Syritta pipiens.

Dr Magni said that in biblical times people mistakenly thought that honey bees would colonise the decomposing remains of certain noble animals – when it was likely they were actually observing hoverflies.

She said it was possible to detect remnants of the insects and DNA inside them centuries later, under certain circumstances.

The Herald obtained historic development applications from the local council which referred to the existence of a cellar at the person of interest’s property. 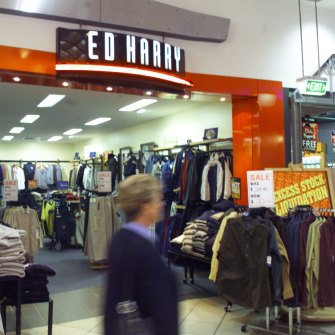 Janine Vaughan was managing the Ed Harry menswear store in Bathurst before her disappearance.Credit:Simon Alekna

A man who owned the property in the 1980s marked the rough location of the cellar on a floor plan for the Herald – placing it within metres of where the odour and insect infestation were identified.

The man said the cellar was accessible via a trapdoor and he used it to store building supplies during a renovation project.

“We only covered the access for safety purposes and the cellar was never filled in,” he said.

After police did not respond to requests to search the property, the Herald sought the assistance of a specialist forensics investigator to organise a private search of the property, its sub-floor and the cellar.

The owners initially gave permission for the property to be searched but reneged on Tuesday, before the search could be carried out.

Janine Vaughan’s sister, Kylie Spelde, said the family felt a search of the property “had to be done” to rule it in or out of the investigation. 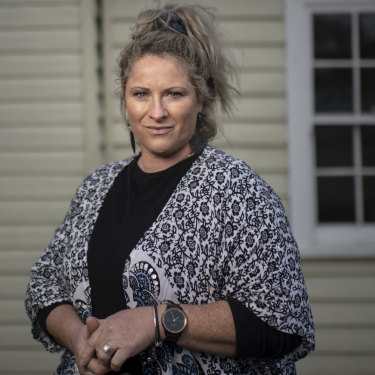 “We as a family won’t leave any stone unturned,” she said.

Interviews with people who knew the person of interest over the years painted a picture of a man with a Jekyll and Hyde personality. To some, he seemed caring, decent and genuine. To others, he was arrogant, imposing and nasty.

One former co-worker recalled the man could fly into fits of rage, leaving other workers feeling “very scared”.

“He had that temper that was quite volatile … he shouted,” the woman recalled.

“We as a family won’t leave any stone unturned.”

She said the man tried to be on his best behaviour at work, but in a “simpering” kind of way. There was something “seething” below the surface, she felt.

Another male employee from the same workplace got along with the man himself, but remembered he was in constant conflict with female workers.

“My impression [was] he’s not such a bad person, but I could be wrong,” the man said.

“When you see him fighting with the women he was a nasty person, no doubt about that … the confrontation was real.

Another former co-worker said she was in “shock and disbelief” after she was the subject of unwanted sexual advances from the man. Staff remembered the man turning up to work dirty, dishevelled and sweating profusely.

Ms Spelde said she would chase to the end of every rabbit hole until she finds out what happened to her sister.

“She just had this vibrant personality that everyone was attracted to,” Ms Spelde said.

“She was absolutely beautiful. I just want the world to keep remembering those things about her.”