The distressing footage shows the animal gnawing at the car tyres in a bid to break free.

Its paws are trapped under the wheel and the panicked dog is seen wide-eyed and panting.

One of the herdsmen, who remains unnamed, can be heard in the background of the video saying: “His legs are trapped under the wheel. He is arrested.”

“These animals are dangerous. If he breaks free, I am done.”

The man then gets closer to the wolf and addresses it by saying: “Give me back my sheep now and I will let you go.”

Both men are reported to have hunted the wolf down before shooting him in its hind leg.

They then chased it in their car for around 30 minutes before running over it.

And when the suffering wolf fell to the ground, the herdsman taunted it before they reportedly shot him to death.

The incident occurred in an unspecified village in the Republic of Dagestan, south-western Russia. 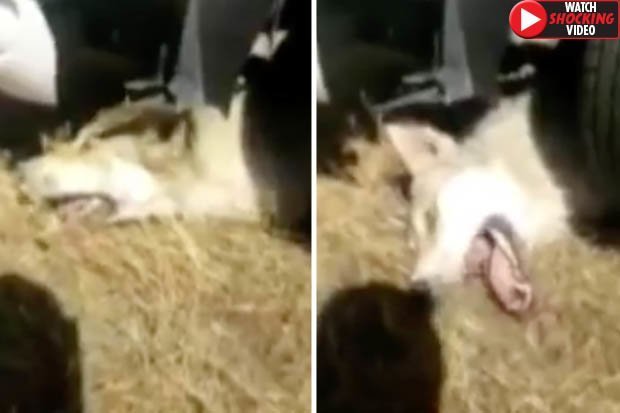 And after being shared anonymously online, hoards of people have condemned the herdsmen’s cruelty.

Another stated: “You have to protect your sheep better instead of killing the animals.”

It comes after the world’s largest car, which weighs 319kg, was filmed being walked on camera.