In a community of only 1000, it can be difficult to hide, as the citizens of fire-ravaged Mallacoota discovered when they attempted to evade “Princess Rat”, aka Jenny Lloyd.

Ms Lloyd, a former navy officer and strategic planner, spent countless seven-day weeks volunteering to draft her beloved town’s community-driven recovery plan, using their voices. Sometimes, while outside the post office “press-ganging” people to vote on proposals, she noted “you could see them doing a combat crawl in the gutter”. 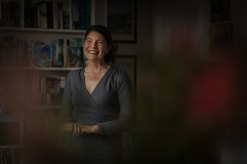 Jenny Lloyd fought until it was too dangerous to save her house, then turned to helping her community have its voice heard in the great rebuild.Credit:Rachel Mounsey

Their attempts were largely futile. Ms Lloyd – a 59-year-old widow who fought alongside her 70-something neighbour, retired CFA captain Eric Donald, to save both of their houses as “armageddon” bore down – appears also to be a force of nature.

“As a naval officer, every second course you do is putting out a fire basically, because fires on ships aren’t good,” said Ms Lloyd, whose husband, Geoff Carroll, died of Alzheimer’s disease and cancer a couple of years before the 2020 fires that destroyed 123 homes in Mallacoota.

Even though she and Mr Donald were very well prepared, she was struck by the fire’s speed.

“All we could do was sit and wait, and then the sky became black … and the wind changed and the sky became bright red,” said Ms Lloyd, who has just been added to Victoria’s Honour Role for Women for her fire recovery work. 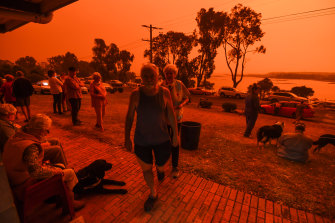 Locals in Mallacoota in January as fires devastated the region over summer 2020. Ms Lloyd was a key player in the recovery.Credit:Justin McManus

“One of my girlfriends who was over by the water [where 4000 people were sheltering] rang me hysterical, saying, ‘Get the f— out of there – the fires are coming up your street.’ We could hear all these explosions, which were gas bottles going up; it sounded like a World War I kind of thing.”

Though the fire reached her back fence, both houses survived. In the aftermath, which cut the town off for weeks while blazes continued, Ms Lloyd turned her attention to supporting others.

She presented emergency bulletins on community radio after some broadcasters had evacuated and “some people were so distressed they couldn’t get the words out”. She also became involved in the Thinking Group, a small group of locals who banded together to start consulting others on recovery.

Ms Lloyd’s efforts were noted, and she was elected as deputy chair of the 700-strong Mallacoota and District Recovery Association. That group is known as MADRA and its leadership team as “MADRATs”, each with a nickname such as King Rat, Princess Rat, Reverend Rat or McScrooge Rat, the treasurer. 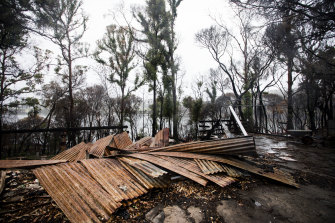 One of several office-holders “who had our hands put up for us”, Ms Lloyd said it was the kindness of Mallacoota friends during her husband’s illness that made her give what turned out to be huge volumes of time drafting 68 recovery proposals from the community.

“In the three years Geoff was sick, people were so kind. They fed us. We had a car accident when a guy fell asleep at the wheel and sideswiped us, and when I was taking Geoff to hospital the next day, I got up and there were three sets of keys from people saying, ‘Use our car.’

“That’s the kind of community it is,” said Ms Lloyd. “I knew it would be so much work, and then I thought, ‘When I needed help, it was there for me. So this is payback.’”

Ms Lloyd used knowledge from her master’s in international and community development, and called in favours from locals including a former statistician and urban planning professor to help draft the plan chapter by chapter, which was then published in the local paper. 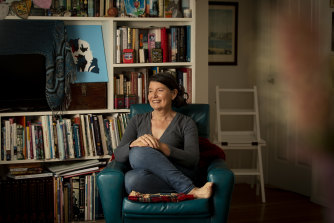 Jenny Lloyd believes the community’s input into Mallacoota’s recovery plan has made it “incredibly good”.Credit:Rachel Mounsey

Ms Lloyd said many people devoted a great deal of time to the plan, and setting up measures including emergency housing, infrastructure replacement, mental health rebuilding programs and reconnection initiatives. She said the team effort truly represented the voices of locals.

She is happy with the outcome.

“We said we have this once-in-a-generation opportunity to build back better, suitable for local conditions … and infrastructure that is more enduring and resilient,” she said. “It might cost a little bit more upfront, but the payback downstream will be incredibly good.”