How the deal was done: Inside the last-minute negotiations… and why a late-night row over tampons almost derailed everything

In the end, everything boiled down to one somewhat sensitive issue … the so-called ‘Tampon Tax’.

After days of intense negotiations – covering everything from visas and law enforcement to tariffs and state aid – exhausted negotiators in Brussels were left with one outstanding problem.

The two sides had agreed a VAT deal in which Northern Ireland would agree to levy the tax at the same rate as the Republic.

The idea was controversial – leaving Northern Ireland separated from the rest of the UK in another area. But it was deemed necessary for smooth trade from North to South.

When the proposal was sent back to London for approval, however, it hit a snag.

The Vote Leave campaign had pledged to scrap the five per cent VAT that the EU levies on sanitary products. Under the proposed deal, the PM would be unable to keep that pledge in Northern Ireland. 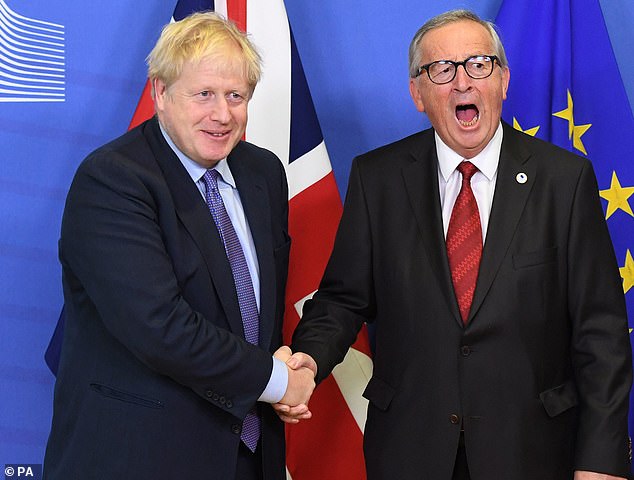 It took two personal phone calls at 9.30am and 11am from Boris Johnson to European Commission chief Jean-Claude Juncker to agree a special ‘derogation’ for sanitary products

The EU’s chief negotiator Michel Barnier was not impressed. He did not mention the issue directly, but told EU ambassadors in Brussels on Wednesday night that the talks were stuck on a dispute about VAT.

By 2am yesterday, the sides could still not settle the issue and broke up. It took two personal phone calls at 9.30am and 11am from Boris Johnson to European Commission chief Jean-Claude Juncker to agree a special ‘derogation’ for sanitary products.

Day that put a smile on Dominic Cummings’ face 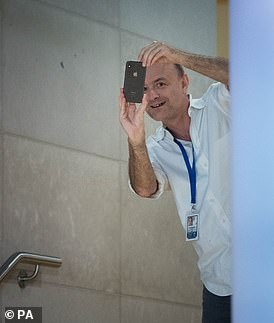 Dominic Cummings cheerfully peeking out from behind a wall

He’s frequently characterised as a snarling attack-dog only too happy to clamp down on Boris Johnson’s Brexit enemies.

But even the PM’s chief adviser Dominic Cummings was swept up in the optimism – as he cheerfully peeked out from behind a wall to snap the scene in Brussels yesterday.

An hour later, the final text of a deal – which critics said was impossible – was published.

It was a remarkable transformation from a month earlier, when Tory rebels joined forces with Labour to push through legislation apparently taking the threat of No Deal on October 31 off the table.

The passage of the so-called Surrender Act, which requires the PM to seek an extension if he cannot get a deal through by Saturday, had knocked negotiations for six.

But the legislation also helped galvanise the Prime Minister. Downing Street stuck to the line that the UK was leaving on October 31. Privately, aides quickly concluded that there was no certain way to circumvent the law.

By late September, the Prime Minister had concluded that the only way he could keep his ‘do or die’ pledge was by cutting a deal.

Summing up his predicament, the PM told allies that Remainer MPs ‘think they’ve got me locked in a casket at the bottom of the Mariana Trench’. But he added: ‘I’m not sure they’ve read the situation quite right.’

Work began on an audacious scheme to solve the border problem by allowing customs checks in the Irish Sea – an idea Mr Johnson had branded unacceptable and was certain to infuriate the DUP.

In a bruising phone call, German Chancellor Angela Merkel told Mr Johnson he would never get a deal unless he agreed to effectively leave Northern Ireland in the EU ‘forever’. But Mr Johnson was determined to give it one last go.

He met Irish Taoiseach Leo Varadkar at a ‘neutral’ location – the 19th century Thornton Manor on the Wirral – for a private chat. 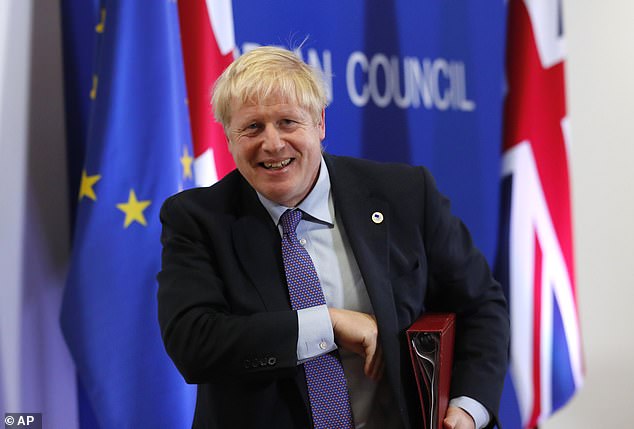 In a bruising phone call, German Chancellor Angela Merkel told Mr Johnson he would never get a deal unless he agreed to effectively leave Northern Ireland in the EU ‘forever’. But Mr Johnson was determined to give it one last go

After 90 minutes, the outline of a grand bargain had been struck.

Business leaders last night urged MPs to back Boris Johnson’s Brexit deal and lift the fog of uncertainty hanging over the economy.

As the pound headed for its best six-day run against the dollar since 1985, industry chiefs welcomed the Prime Minister’s agreement with the EU.

Sterling rose more than 1 per cent against the dollar to a five-month high of $1.2988 in the minutes after the deal was announced. That took gains since Mr Johnson’s meeting with Irish PM Leo Varadkar last week to 6 per cent.

But sterling retreated as low as $1.2765 at one point amid fears MPs might block the deal.

The City of London Corporation’s Catherine McGuinness urged ‘all those involved in the process to put an end to the sustained uncertainty that has left business with its hands tied’.

And Adam Marshall of the British Chambers of Commerce warned: ‘There is still a long way to go before businesses can confidently plan for the future.’

A million details remained to be thrashed out.

But, with the Irish happy, the EU was finally willing to engage. There then followed days of talks, with officials negotiating in parallel in several rooms to get a deal done.

At one point this week, a British official in Brussels was sent out to buy new shirts for the team.

Mr Barnier yesterday acknowledged the Wirral summit was the ‘turning point’. But as the Taoiseach grew happier, the grumpier the DUP became.

By Wednesday evening it became clear that the DUP’s resistance ran deep – and Mr Johnson took the momentous decision to press ahead with a deal without them.

Allies of the PM fear the loss of the DUP could make it impossible for him to get it through Parliament when MPs vote tomorrow.

But Mr Johnson was bullish when he briefed EU leaders last night. One source said: ‘He told them, “It’s good to see you all and I will be happy not to see you again.” It was funny and they all knew what he meant.

10/17/2019 World News Comments Off on How the deal was done… and it all boiled down to the 'Tampon Tax'
Recent Posts
We and our partners use cookies on this site to improve our service, perform analytics, personalize advertising, measure advertising performance, and remember website preferences.Ok