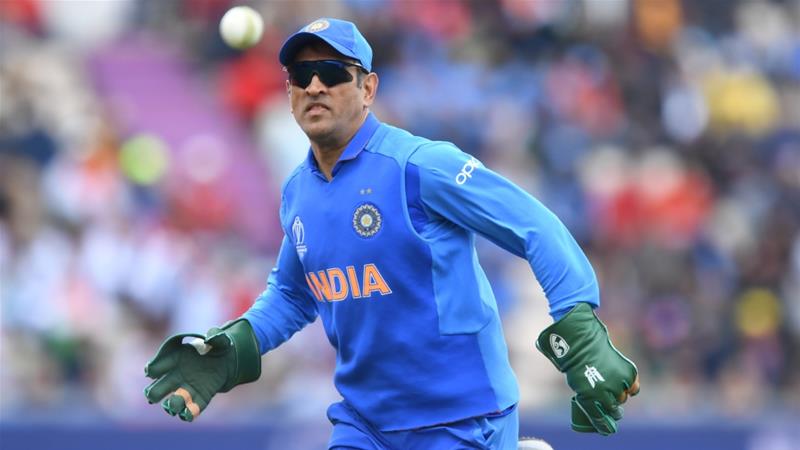 The International Cricket Council (ICC) has rejected a request from India to allow the country’s star cricketer Mahendra Singh Dhoni to wear a military logo on his gloves at the 2019 Cricket World Cup.

In a statement issued on Friday, the ICC said it had advised Indian team officials that the logo was not permitted on Dhoni’s wicketkeeping gloves.

The 37-year-old cricketing star, who guided India to the 2011 World Cup title, is also an honorary lieutenant colonel in the Indian territorial army.

“The regulations for ICC events do not permit any individual message or logo to be displayed on any items of clothing or equipment,” the statement said.

“In addition to this, the logo also breaches the regulations in relation to what is permitted on wicketkeeper gloves.”

The ICC had earlier asked Dhoni to remove the army insignia from his wicketkeeping gloves, sparking a nationalistic furore in the South Asian country.

On Wednesday, Dhoni sported the army’s dagger insignia on his gloves during India’s opening match against South Africa in the World Cup, being hosted by England and Wales.

The ICC said its clothing and equipment rules allow only manufacturers’ logos on gloves, and that Dhoni or the Indian team had not sought any permission to sport the badge.

The ruling prompted passionate responses from India’s ruling party as well as opposition politicians, Bollywood stars and common citizens. On Friday, #DhoniKeepTheGlove was the most trending hashtag on Twitter in India.

The controversy forced New Delhi to weigh in, with Indian Prime Minister Narendra Modi’s government urging the country’s cricket board, the BCCI, to sort out the matter.

“The government does not interfere in matters of sports bodies, they are autonomous,” Sports Minister Kiren Rijiju posted on Twitter.

“But when the issue is related to the country’s sentiments, then the interest of the nation has to be kept in mind. I urge the BCCI to take appropriate steps on the issue.”

The BCCI wrote to the world governing body for cricket, seeking permission for Dhoni to sport the insignia.

Bollywood actors Riteish Deshmukh and Rahul Dev backed Dhoni, with Deshmukh saying the army insignia was “a symbol of pride”, and Dev telling the ICC to focus on the “standard of umpiring” over Dhoni’s gloves.

Many others praised Dhoni and expressed pride in the army, while some went as far as to call on the Indian team to pull out of the tournament if the cricketer was forced to remove his gloves.

However, some criticised Dhoni, with author Prerna Bakshi calling the move “macho exhibitionism” and “over the top jingo nationalism”.

In an editorial, news website The Print said Dhoni had “erred by wearing” the military logo on his gloves. “Champion sportsmen must confine their battles and nationalism to their sporting skills,” it added.

Meanwhile, Pakistan’s federal Science and Technology Minister Chaudhary Fawad Hussain slammed what he called an “idiotic debate in Indian media”, saying Dhoni was in England to play cricket, not for any war.

This was not the first time Indian cricketers had stirred controversy by sporting military gear.

In March, Dhoni and his team members wore army camouflage-style caps during a one-day match against Australia to show their solidarity with Indian paramilitary soldiers killed in a suicide attack by a Pakistan-based armed group.

The Indian team, led by Virat Kohli, also donated their earning from that match to the families of the defence personnel who died on duty.