The move, aimed at protecting workers in sectors like agriculture and construction, reflects a growing recognition of the health threats posed by global warming. 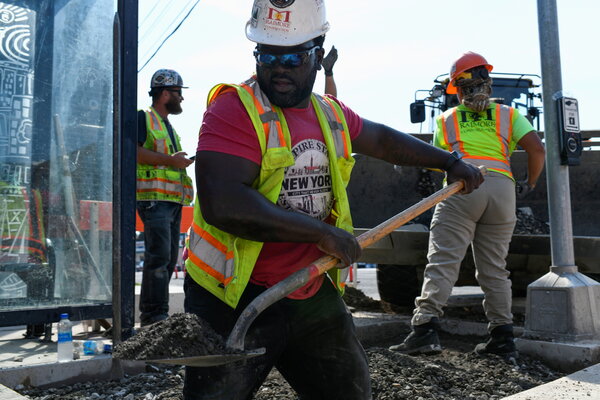 WASHINGTON — The Biden administration is opening an effort across federal agencies to address the health impacts from heat, including the first ever labor standard aimed at protecting workers from extreme heat, as part of a growing recognition of the dangers posed by warming temperatures caused by climate change.

The Occupational Safety and Health Administration, part of the Labor Department, will draft its first rule governing heat exposure designed to protect those who work outdoors in agricultural, construction and delivery services as well as workers in warehouses, factories, and kitchens.

It comes after a summer that saw record heat waves in the Western United States and British Columbia, which scientists say were made more extreme by climate change. According to the National Weather Service, extreme heat is the nation’s No. 1 weather-related killer.

“Over the past few weeks, I have traveled across the country to see firsthand the devastating human and economic toll of extreme weather exacerbated by climate change,” President Biden said in a statement. “Rising temperatures pose an imminent threat to millions of American workers exposed to the elements, to kids in schools without air-conditioning, to seniors in nursing homes without cooling resources, and particularly to disadvantaged communities. My administration will not leave Americans to face this threat alone.”

The administration said it would form an interagency Heat Illness Prevention Work Group to provide a better understanding of the challenges and best ways to protect workers from heat injuries.

In addition to writing the new rule, the Labor Department will prioritize heat-related interventions and work inspections on days when the heat index exceeds 80 degrees, the administration said. The department is also already working to complete before next summer a program that will target industries at higher risk of heat injuries, and to focus more resources on inspections.

Experts said that rules and policies designed to protect workers from extreme heat were long overdue — although, depending on the details of how they are written, they could be expensive for employers.

“Heat illness has been widely underreported and under-addressed for a long time — and now it is getting even hotter,” said David Hondula, a professor at the School of Geographical Sciences and Urban Planning at Arizona State University.

Dr. Hondula noted that some states and professional organizations, such as the United States Soccer Federation, already place limits on when and how long workers can perform their duties in the heat.

Some of those guidelines, which could inform a federal rule, include mandatory breaks for people who work in high temperatures for certain periods of time, and, in some cases, requirements that work cease when the heat index goes above a certain level. They also include requirements that employers provide shade, water and air-conditioning when possible, and that employers provide access to medical attention for workers who are regularly exposed to heat.

But should such guidelines turn into federal regulations, it could increase costs or lower productivity for some industries — particularly any requirement that construction or other outdoor work cease entirely under certain heat conditions, Dr. Hondula said.

“It’s fair to say that it could be costly,” he said, although he noted that the economy was already bearing the burden of illnesses and deaths associated with heat exposure. “We may already be absorbing some of the productivity costs” he said.

Marc Freedman, vice president of workplace policy for the U.S. Chamber of Commerce, said his organization looked forward to participating in OSHA’s rule-making process. But he noted that there were “unique difficulties” when it comes to creating a heat safety standard.

“Heat is a very challenging hazard to regulate since there is no common threshold of risk and employees react differently to exposure,” Mr. Freedman said.

In addition to the new workplace heat standards, the Health Department has already issued guidance to allow the Low Income Energy Assistance Program, which has historically been used to aid people who cannot pay heating bills during extreme cold, to help cover the costs of home air-conditioning and cooling centers during extreme heat.

And the Environmental Protection Agency is using funds from an economic stimulus bill passed this year to provide technical assistance to create neighborhood cooling centers within public schools.

The new OSHA rule is one of the first direct government responses to an emerging field of research showing that extreme heat is harming and killing more workers and vulnerable populations.

A study issued this summer found that heat contributes to far more workplace injuries than official records capture, and those injuries are concentrated among the poorest workers. Hotter days don’t just mean more cases of heat stroke or exhaustion, but also injuries from falling, being struck by vehicles or mishandling machinery because heat makes it difficult to concentrate, the researchers found.

And after Hurricane Ida pummeled New Orleans this month, more people in the city died of heat exposure after the storm than were killed by floodwaters.

A study published in May found that the growing risk of overlapping heat waves and power failures poses a severe threat to major American cities. Power failures have increased by more than 60 percent since 2015, as climate change has intensified heat waves, according to the research in the journal Environmental Science & Technology. Using computer models to study three large U.S. cities, the authors estimated that a combined blackout and heat wave would expose at least two-thirds of residents to heat exhaustion or heat stroke.

And other research suggest that rising temperatures are even widening the racial achievement gap in United States schools, further evidence that the burdens of climate change fall disproportionately on people of color. In a paper published in the journal Nature Human Behavior, researchers found that students performed worse on standardized tests for every additional day of 80 degrees Fahrenheit or higher, even after controlling for other factors. Those effects held across 58 countries, suggesting a link between heat exposure and reduced learning.

09/20/2021 World News Comments Off on In a First, Washington Will Draft Rules on Workplace Heat Dangers
Recent Posts