New Delhi: India now has the fastest-growing coronavirus caseload of any country in the world, reporting more than 75,000 new infections per day.

Crowded cities, lockdown fatigue and a lack of contact tracing have spread COVID-19 to every corner of the country of 1.3 billion people. This week, authorities said that one-sixth of a tiny tribe on a remote, coral-fringed island had come down with the virus. 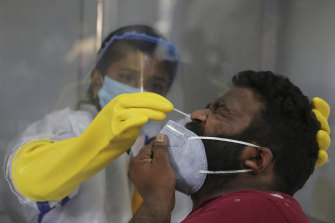 A health care worker takes a nasal swab sample to test for COVID-19 in Hyderabad, India.Credit:AP

Health experts say the virus reproduction rate is ticking up as more state governments, desperate to stimulate an ailing economy, are loosening lockdown restrictions, which is spreading the virus further.

"Everything right now is indicating toward a massive surge in the caseload in coming days," said Dr Anant Bhan, a health researcher at Melaka Manipal Medical College in southern India. "What is more worrying is we are inching toward the No.1 spot globally."

During the strict lockdown from late March to late May, most of India's COVID-19 cases were concentrated in urban areas, Bhan said. But as restrictions on interstate travel were eased, many people started moving from the cities to rural areas, bringing the virus with them.

Some public hospitals have been so overwhelmed that doctors have had to treat patients in the hallways. In some cases, people in a critical condition have no place to get help, even if they don't have the coronavirus.

More than 60,000 Indians have died from COVID-19, and India will soon have the third-largest death toll, after the United States and Brazil. Its overall number of reported infections is already the world's third-highest.

India has reported more than 3 million total cases, and its day-to-day increase is now substantially higher than that of either the United States or Brazil, which have reported between 40,000 to 50,000 new infections per day in recent days.

Per capita, however, India has had far fewer deaths than those two countries and many others, which doctors say reflects the country's younger and leaner population.

One reason the country is reporting such a steep rise in infections now is simply that it is testing more. India performs nearly 1 million tests a day, compared with 200,000 a day two months ago.

Four people at the Republican National Convention in North Carolina this week tested positive for the novel coronavirus, officials said on Friday, even as Republicans played down the US health crisis in re-nominating President Donald Trump.

The party's convention, which began with one day of events in Charlotte, North Carolina, despite the pandemic that has killed more than 180,000 Americans, ended on Thursday after four days of speeches lauding Trump.

Throughout the convention, Republicans largely abandoned talk of the crisis as if it had abated, instead reminding voters of the robust economy that existed beforehand.

The official Twitter feed of Mecklenburg County, North Carolina, where Charlotte is located, said two convention attendees and two event support staff had tested positive and all were "immediately isolated".

Convention spokesman Michael Ahrens confirmed the four positive tests out of about 1000 administered.

"The RNC had diligent safety protocols in place, including testing all attendees before arriving in Charlotte, and again upon arrival," Ahrens said in a statement.

On Thursday night, Trump delivered remarks at the White House before a crowd of more than 1000 people seated in chairs centimetres apart, with little evidence of face masks being worn despite health experts' recommendations. 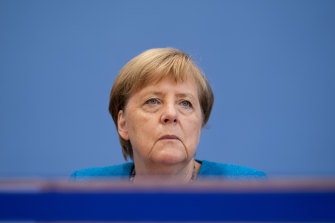 Life would not return to normal until a vaccine had been developed, German Chancellor Angela Merkel said.Credit:Getty Images

Urging citizens not to drop their guard against the virus as Germany's daily infection rate rises, she told a news conference: "This is a serious matter, as serious as it's ever been, and you need to carry on taking it seriously."

Even though Germany would not fully repay debt incurred to fund relief measures offsetting the impact of COVID-19 until 2058, such stimulus was essential as the economy could not be allowed to grind to a halt, she said.

Meanwhile, she said further contracts for COVID-19 vaccines were "in the works" between drug companies and the European Union, whose rotating presidency Germany holds until December.

With none of the many vaccines under development having yet passed through phase III trials, the European Commission this week secured at least 300 million doses of British drug maker AstraZeneca's potential treatment.

The daily number of deaths in Turkey due to coronavirus rose to 36 on Friday, its highest level since mid-May, while the number of daily new cases again rose above 1500, according to Health Ministry data.

This week the level of new daily cases has risen to levels last seen in mid-June, prompting the government to impose measures to combat the spread of the pandemic.

The Health Ministry figures showed a total of 1517 new cases on Friday, bringing the total number of cases to 265,515.

The daily death toll was the highest since May 17, when it stood at 44. The total death toll in Turkey stands at 6245.

Responding to this week's surge in numbers, President Tayyip Erdogan has announced that all state institutions may now implement "flexible working methods" while the Interior Ministry said it was banning certain events and celebrations.

Get our Coronavirus Update newsletter for the day’s crucial developments and the numbers you need to know. Sign up to The Sydney Morning Herald’s newsletter here and The Age’s here.

The New York Times, with Reuters

08/28/2020 World News Comments Off on India’s COVID-19 outbreak is now the world’s fastest-growing
Recent Posts
We and our partners use cookies on this site to improve our service, perform analytics, personalize advertising, measure advertising performance, and remember website preferences.Ok