BODYCAM footage of Gabby Petito being probed about her fight with fiance Brian Laundrie weeks before she was found dead reveals how cops quickly dismissed her credibility while commiserating with him.

The footage of Gabby sobbing to Moab police officers went viral last month as the department came under fire for failing to do more to protect the 22-year-old hiker. 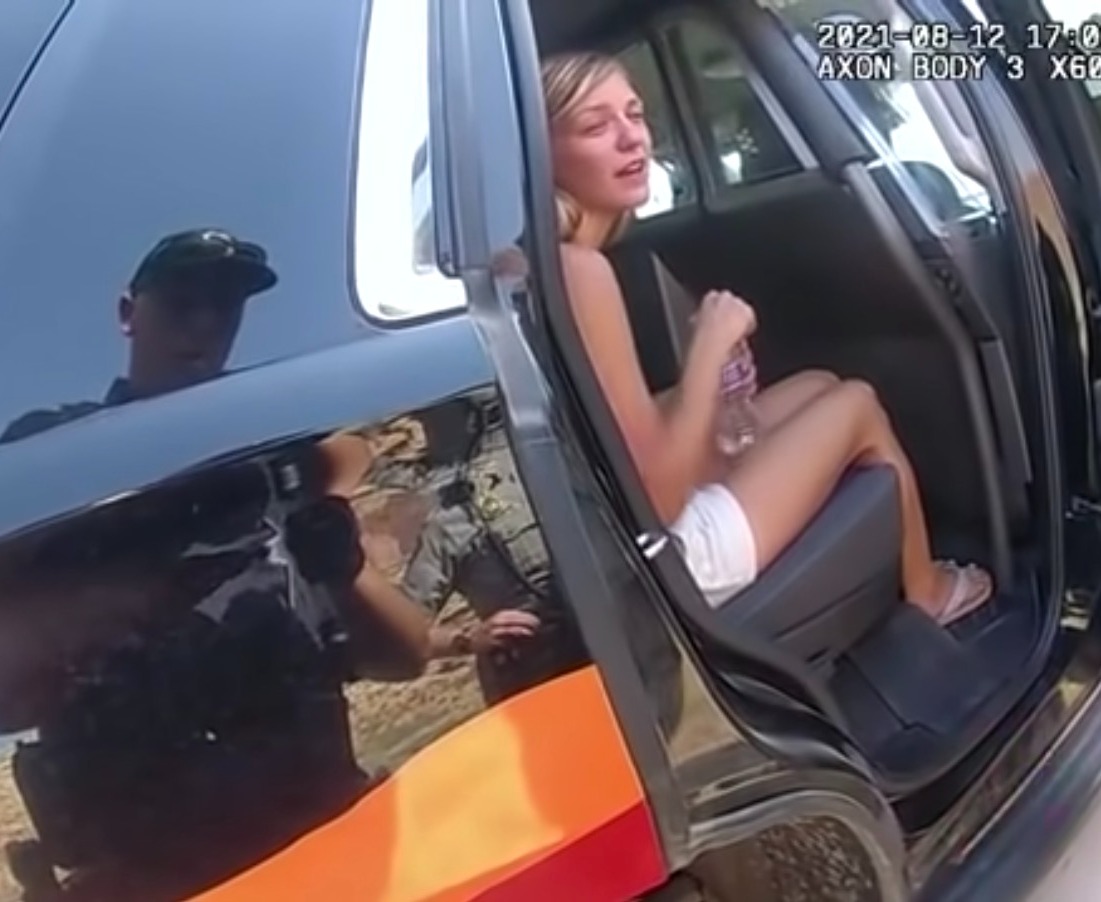 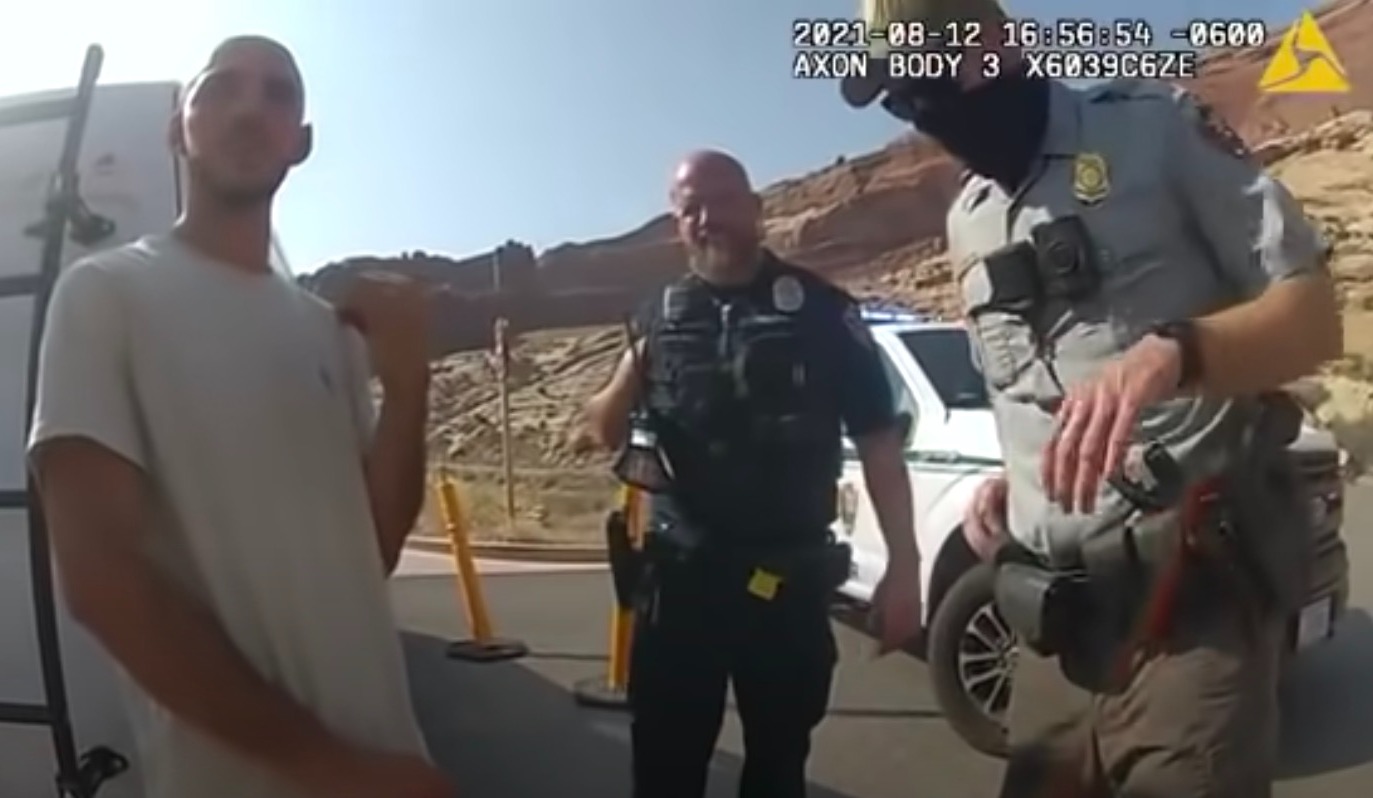 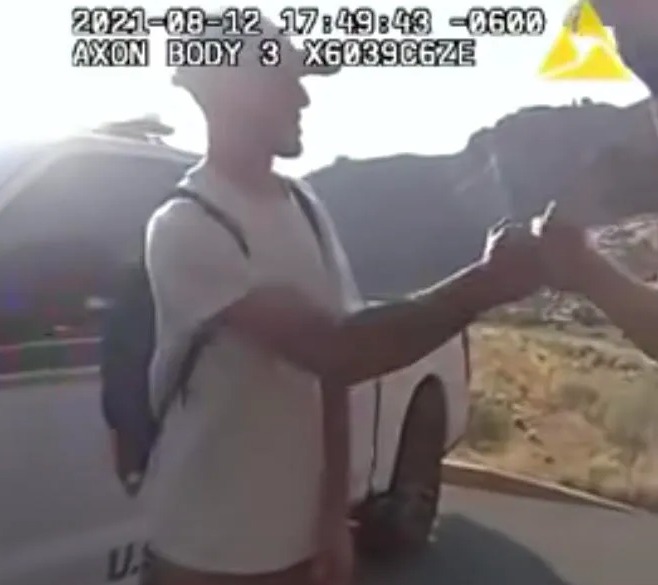 Over the course of the 77-minute video, officers Eric Pratt and Daniel Robbins appear to compare Gabby to their "anxious" wives seven times and tell her to "take a shower" to calm down.

Both officers seem unfazed by Gabby's distress, with Robbins at one point misspelling her name as "Petico" instead of "Petito".

Throughout the footage, the cops can be heard discussing how they can allow the pair to go on their way, despite claims that there were clear signs Gabby may have been in danger and being abused.

The officers were also seen laughing and joking with Brian before telling him "we feel bad for you" and going in for a fist-bump.

After separating the pair for the night – leaving Gabby in her van and booking Brian into the hotel room – Robbins asks Gabby if she has anything to say to Brian.

She tells Robbins that she wants to make sure Brian has a cellphone charger.

But when Robbins relays the message to Brian, he says: "She loves you. She’s looking forward to seeing you tomorrow."

Robbins then spends a few minutes giving Brian travel tips before sending him on his way.

The bodycam footage was recorded on August 12 as police responded to a call about a fight Gabby and Brian had outside the Moonflower Cafe.

Moments before officers pulled the couple over, Robbins tells a dispatcher that the van driven by Brian was speeding and had hit a curb.

Robbins approaches the vehicle and asks Gabby why she's crying, to which she replies: "We’ve just been fighting this morning. Some personal issues."

Brian adds: "It’s a long day. We were camping yesterday and camping got… the stuff, wise and stuff. I’m sorry. I’m sorry I hit the bump there."

"I was distracting him from driving. I’m sorry," Gabby says.

Asked again to explain her tears, Gabby says that she had been apologizing to Brian for her OCD and that "I'm in a bad mood."

Robbins interjects to ask the couple about their occupations before Gabby reveals that she is a travel blogger and claims Brian blocked her from the car earlier that day.

"He told me I needed to calm down, yeah. But I’m relatively calm. I’m down all the time. He really stresses me out. And this is a rough morning," she says.

Robbins then steps away to let Gabby "relax a bit". He approaches Brian for his side of the story and insists: "You're not in any trouble right now."

Brian tells Robbins: "She gets worked up sometimes and I try and really distance myself from her. So, I locked the car and I walked away from her.

"What happened this morning is that she’s trying to start up a little website, blog and everything. So every time… we really had a nice morning, if anything, but she just got worked up, because we were trying to get going and get our day going."

Robbins then questions the visible scratches on Brian's face, which he claims came from Gabby trying to claw the van keys away from him.

Brian then claims that he was speeding and drove over a curb because Gabby had grabbed the wheel. 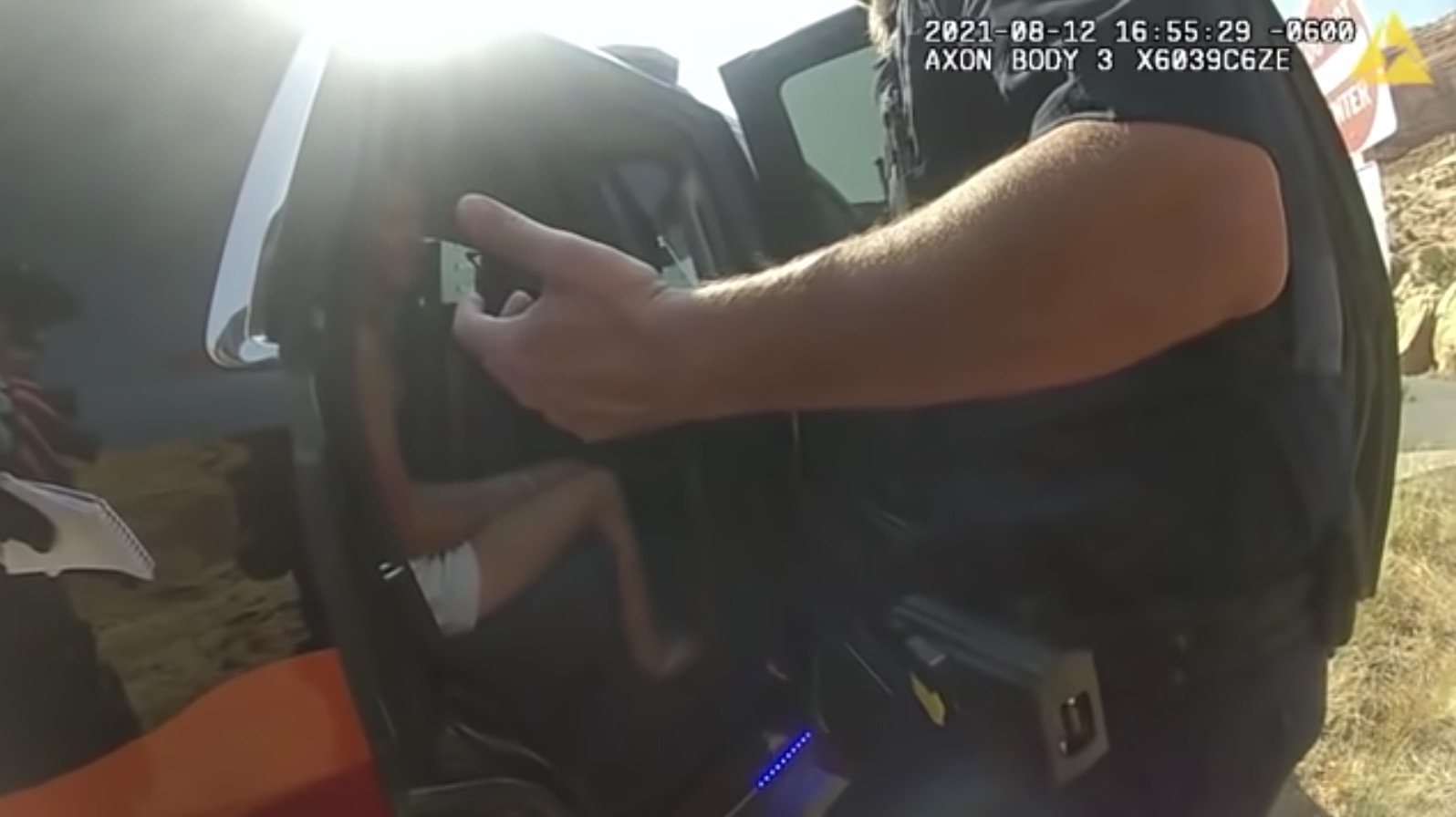 HE SAID, SHE SAID

Robbins then walks back over to Gabby, who is being questioned by Pratt.

"He just grabbed you? Did he hit you, though? It’s okay if you’re saying you hit him, and I understand if he hit you, but we want to know the truth, if he actually hit you," Pratt asks.

Gabby alleges that Laundrie had grabbed her face, left a “burning” gash on her cheek and red marks on her arm as cops notice some bruises.

"Well, he like grabbed me, like, with his nail, and I guess that's why it hurts. I definitely have a cut. Like, I can feel it," she says.

Gabby claims that Laundrie had told her to shut up as she appears to admit that she hit him first.

Pratt asks her: "Do you tend to have a lot of anxiety and stress?"

Gabby says: "I have a lot of anxiety," before Pratt offers up his own story about his ex-wife's mental health struggles.

"I know it’s a little personal, but to help you understand, we would feed off each other’s anxiety and it would spiral, do you know what I mean?" Pratt says.

"And it doesn’t matter how much I loved her, it may be bad for your soul. Just saying, I’m not telling you what to do with your life, but if you know you have anxiety, look at the situations you can get in. You know what I mean? And we’re not here to be mean to you."

Robbins then questions Gabby about Brian's claim that she grabbed the steering wheel, which she denies.

'SHE JUST GETS CRAZY'

The officers go back to get more detail from Brian, probing further about his own injuries.

Brian alleges that Gabby hit him first and tells the officers: "I’m fine. And I love Gabby. I hope she doesn’t have too many complaints about me. I was just trying to make her calm down."

Asked by Robbins if Gabby takes any medications, Brian replies: "She just gets crazy. No. No, I don’t think so. None that I know of."

Robbins goes back to Gabby to get her information and she spells out her surname before the officer repeats it incorrectly into his radio.

He then speaks with a third officer who relays what the 911 caller who reported Brian and Gabby's dispute had seen.

That officer says: "It sounds to me like she is the primary aggressor."

As the cops discuss whether to make any arrests, they share their confidence in Brian's story that Gabby grabbed the wheel of the van – even though she claimed she did not.

The third officer goes back to Brian and says they believe he is a "victim of a domestic assault."

Brian protests to his "22-year-old blonde hair, blue-eyed" fiancee going to jail, at which point the officer offers up separation as another option.

Brian offers to spend the night in jail instead of Gabby, but the officer says: "You did nothing wrong."

He continues to insist that Gabby be let go without arrest so they can get on their way.

Referencing his own marriage, Robbins says: "I know how rough this stuff can be. I’ve been married for five and a half years. Believe me, if I were to say that me and my wife haven’t had our share of spats, I’d be lying to you. She lives with anxiety."

A few minutes later the officers ask to take photos of Brian's injuries, directing him to lift his shirt and pull down his collar.

The officers then go back over to Gabby and ask her multiple times if she intended to hurt Brian.

"No. Never," she says. "I was trying to get him to stop telling me to calm down."

Robbins is then heard speaking to other officers about their options and saying: "I mean, it's a headache whether I go left or I go right."

The officers soon agree to separate the pair instead of citing Gabby.

When he breaks the news to Gabby, she begins to cry even harder.

Robbins tells her: "Relax, breathe. There’s no reason to be crying now. Okay? I understand that this can feel like it’s a nightmare, but you’re coming out as the golden flower on top of it all."

Robbins relays that Brian will be staying at a hotel overnight and asks her if she has anything to say to him.

"You want me to let him know that you love him and that you’ll see him tomorrow and stuff like that? I can do that for you," Robbins says.

Gabby replies: "And make sure that he doesn’t forget a phone charger. It’s definitely dead."

Robbins goes back to Brian and tells him: "So she does have a couple of messages for you. One, she says she loves you. She’s looking forward to seeing you tomorrow. Two, don’t forget a cell phone charger."

The officer brings up his wife once again when urging Gabby to find a place to park the van that has a shower.

Robbins says goodbye to Gabby and goes back to the squad car, instructing Brian to get in the back seat so they can drive him to the hotel.

The two men then engage in a friendly conversation about listening to music in the car.

Robbins again apologizes to Brian for the inconvenience and says he understands how hard it is to have a partner with anxiety.

The officer also offers up tips for where Brian should travel, suggesting they head toward California and Oregon.

When they pull up outside the police station, Robbins passes Brian along to another officer and says: "Just remember my requests. I think it’ll make a big difference in your guys’ next couple of weeks at the very least."

Brian replies: "I really appreciate it. Thank you so much for everything." 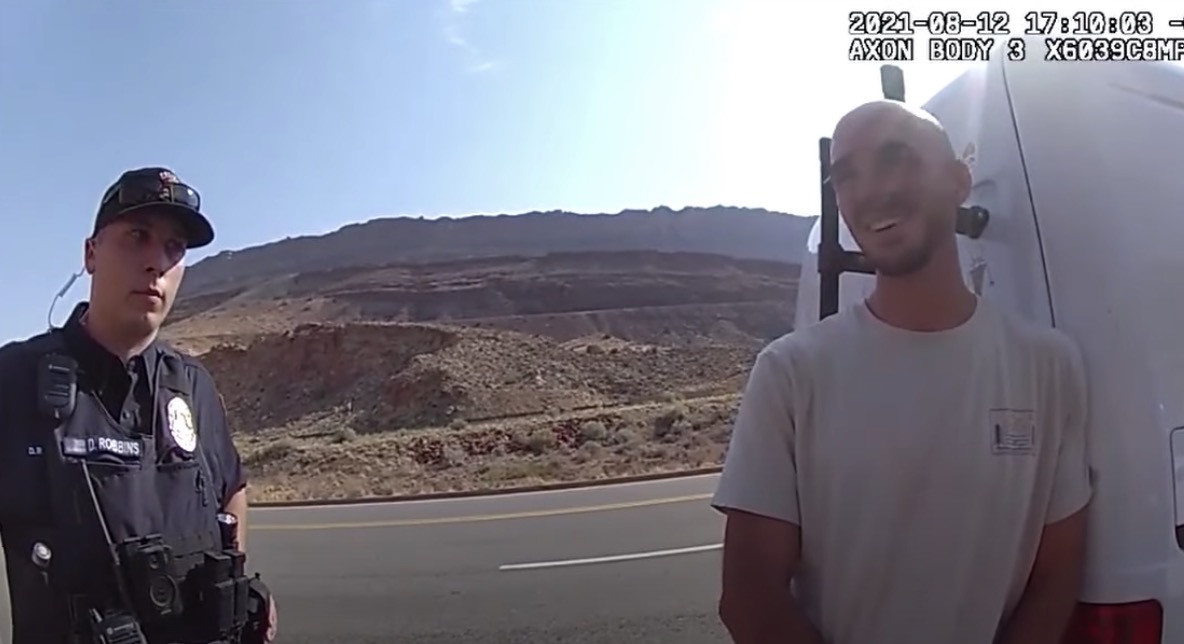 The footage from Robbins' body camera was released on September 16 – five days after Gabby was reported missing.

It wasn't until two weeks later that the Moab police department released a second video from Pratt's body camera, which revealed injuries to her neck and face as well as her anxiety at being separated from Brian.

Last week a leaked email suggested the department tried to cover up the footage amid outrage from critics accusing them of mishandling the situation.

Happy Morgan, a lawyer who served as Grand County attorney for eight years, criticized the police department's handling of the case in an email which read: "The sooner you come clean about Pratt's body camera for the August 12 Petito/Laundrie matter, the better.

"If it was withheld, you need to provide it and apologize."

Moab Police Acting Chief Braydon Palmer claimed that too many media requests had been submitted, causing the "delay" but admitted that the “process should’ve occurred more timely.”

Gabby Petito, 22, was last seen on August 24, leaving a hotel in Utah. Here is a timeline of Gabby Petito’s disappearance: