Baghdad: Iraqi militias backed by Iran have agreed to temporarily halt attacks targeting the American presence in Iraq, on the condition that US-led coalition troops withdraw from the country in line with a parliamentary resolution, three militia officials have said.

The militia officials spoke on Sunday, just hours after a roadside bomb targeted a convoy that was transporting equipment for the US-led coalition, damaging one vehicle, an Iraqi army statement said. The attack on a highway south of Baghdad prompted questions over whether such a truce could hold across all militia factions. 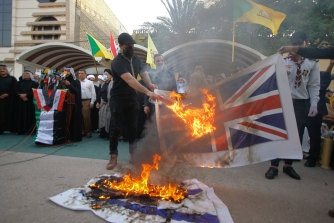 Supporters of the Iran-backed Kataeb Hezbollah militia burn representations of Israeli, US and British flags during a protest in Najaf, Iraq, on September 18, 2020. Credit:AP

Roadside bombs and in particular rocket attacks targeting the US embassy in Baghdad — located inside the heavily fortified Green Zone — have become a frequent occurrence and have strained ties between Washington and Baghdad.

The militia factions offered a truce and will refrain from targeting the US in Iraq, including the embassy, on the condition that all American-led forces withdraw within an “acceptable timeframe,” said Mohammed Mohie, a spokesman for the powerful Iran-backed Kataib Hezbollah.

“If it does not withdraw, the resistance factions will resume their military activities with all the capabilities available to them,” he said.

Two other factions from different Iran-backed groups echoed Mohie’s comments, without specifying a length for the truce, and said it was open-ended. They spoke on condition of anonymity because they were not authorised to give statements.

The militia factions' comments indicate some de-escalation following weeks of tensions. The Trump administration has warned Iraq’s leadership it would close the US embassy in Baghdad if the militia groups were not contained. American officials have said that while it was a serious threat, it was not an imminent ultimatum. In September, the Trump administration shortened a crucial sanctions waiver required for Iraq to import Iranian energy.

The US has blamed Iran-backed militia groups, in particular Kataib Hezbollah, for perpetrating attacks on the American presence in Iraq.

On Saturday, the Co-ordinating Body of the Iraqi Resistance — believed to include an array of Iran-backed militia groups such as Kataib Hezbollah, Asaib Ahl al-Haq and Harakat al-Nujaba — issued a statement announcing “the cessation of its operations against foreign, especially American forces and interests in Iraq”.

Mohie, the militia spokesman, said: “The truce came after major personalities intervened and mediated in order to persuade these factions to stop the bombing operations until the end of the American election. … These were messages that these personalities conveyed.”

Last week, Jeanine Hennis-Plasschaert, the UN envoy to Iraq, held a meeting with Abdulaziz al-Muhammadawi, known as Abu Fadak, the deputy head of the Popular Mobilisation Forces and a commander of the Kataib Hezbollah. The PMF is a state-sanctioned institution encompassing an array of militia groups, some of which are Iranian-backed.

Two Iraqi militia commanders said it was during this meeting with Abu Fadak that an agreement was reached for a ceasefire for at least two months, in return for a scheduled US withdrawal to be determined at a later date. The commanders spoke on condition of anonymity because they were not allowed to brief the media.

The militias' truce announcement coincided with an apparent shift in US rhetoric, after Iraqi officials have said any US embassy closure would isolate Iraq from the world.

Our weekly newsletter will deliver expert analysis of the race to the White House from our US correspondent Matthew Knott. Sign up for the Herald‘s newsletter here, The Age‘s here, Brisbane Times‘ here and WAtoday‘s here.

10/12/2020 World News Comments Off on Iran-backed militias offer truce for US pullout from Iraq
Recent Posts
We and our partners use cookies on this site to improve our service, perform analytics, personalize advertising, measure advertising performance, and remember website preferences.Ok