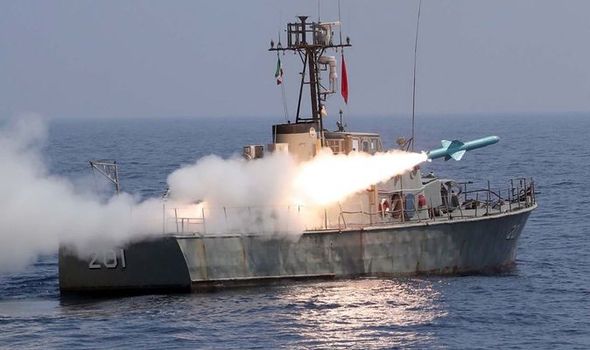 The Islamic Republic began the missile drill today as tensions between the US and the state remain high.

Iran used its largest warship, the Makran and the Zere which has missile-launch capability for the two-day drill.

The state has one of the largest missile programmes in the region and has regularly deployed naval vessels in the Gulf of Oman to flex its military muscle.

Amid tensions between the US and Iran, the Islamic Republic seized two oil tankers in the Gulf of Oman.

The two ships were detained last week after Iranian funds in South Korean banks were frozen due to US sanctions.

In 2019, Iran had also detained a British-flagged tanker, the Stena Impero in a show of force against the West.

This is a breaking news story, more to follow…

01/13/2021 World News Comments Off on Iran launches missile in major warning to Joe Biden – explosive smashes into sea
Recent Posts
We and our partners use cookies on this site to improve our service, perform analytics, personalize advertising, measure advertising performance, and remember website preferences.Ok