The total included 26 women and children after Israeli fighter jets struck targets in a residential road, Gaza’s health ministry said. The attack hit a city centre street, with homes and shops, ­in a five-minute raid just after midnight.

It destroyed two buildings and another one about 45 yards away.

Gaza officials said 16 women and 10 children were among those killed, with more than 50 people wounded.

Yesterday rescue efforts were continuing to find people still trapped ­in rubble. Mahmoud Hmaid, a father of seven who helped with the rescue, said: “These are moments of horror that no one can describe…like an earthquake hit the area.”

Israel said it was responding to almost 3,000 rockets fired towards its towns and cities, including Jerusalem and Tel Aviv.

But it insisted yesterday’s ­civilian casualties were unintentional and said it had attacked a tunnel system used by militants, which collapsed, bringing homes down with it. 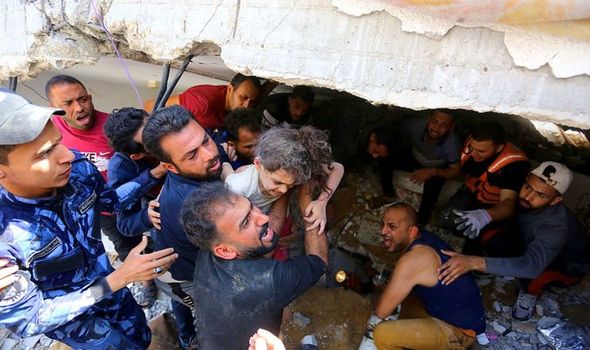 Israel targeted the home of the most senior leader of the Hamas terror group, Yahya Sin war. Premier Benjamin Netanyahu warned that fighting would continue as truce efforts by Egypt, Qatar and the United Nations appeared to be futile.

He said: “We are acting now, for as long as necessary, to restore calm and quiet to you, Israel’s citizens. It will take time.”

At least 192 Palestinians have been killed in a week in Gaza. Eight people in Israel have died, including a five-year-old boy ­ and a soldier.

UN Secretary-General Antonio Guterres said: “This senseless cycle of bloodshed, terror and destruction must stop. Rockets and mortars on one side and aerial and artillery bombardments on the other…I appeal to all ­parties to heed this call.”

05/17/2021 World News Comments Off on Israel-Palestine horror: At least 42 killed in Gaza in deadliest airstrike so far
Recent Posts