Rome: Italy reported 564 COVID-related deaths on Sunday, down from 662 a day earlier and taking the official toll since the outbreak began in February above 60,000, the health ministry said. 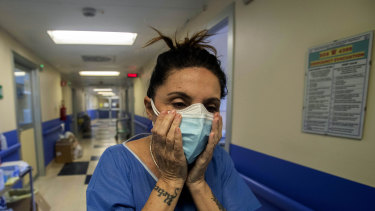 A nurse fixes two masks to her face during her work shift in the COVID-19 ward at the San Paolo hospital in Milan, Italy. Credit:AP

Italy, the first Western country to be hit by the epidemic, becomes the sixth nation in the world to surpass 60,000 deaths, and the second in Europe after Britain. 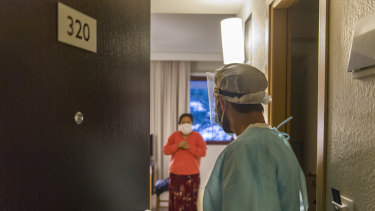 A doctor visits a COVID-19 patient in Bologna, Italy.Credit:Getty

There were 150 new admissions to intensive care units, while the number of intensive care patients decreased by 63 to 3,454, reflecting those who died or were discharged after recovery.

When Italy's second wave of the epidemic was accelerating fast in the first half of November, hospital admissions were rising by around 1000 per day, while intensive care occupancy was increasing by about 100 per day.

Meanwhile, harsh weather slowed coronavirus testing in Austria where several communities in the Alps put screening on hold Sunday and others were urged to do the same after a storm dumped huge amounts of snow, sending some avalanche warnings to their highest level. 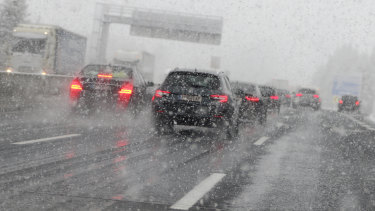 Cars make their way through heavy snow fall in Noesslach near Innsbruck, Austria.Credit:AP

Some parts of the province of Tyrol saw 70 centimetres of snow fall overnight Friday into Saturday, and another 110 centimetres were expected on Sunday, Austria's APA news agency reported.

Austria on Friday started a voluntary mass testing program that officials hope will prevent long, hard lockdowns in the future. The fast antigen tests started in Vienna and in the westernmost Vorarlberg and Tyrol provinces.

Over the first two days, some 300,000 people were tested out of Austria's nearly 9 million. The government is hoping that several million will have been tested by mid December.