In the two months since he came into their lives, a wombat has won over the owners of a boutique Yarra Valley winery.

During multiple COVID-19 lockdowns, he’s been a much-needed source of entertainment. 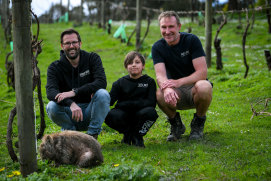 When he’s startled, he can jump, turn 180 degrees in the air, and run away surprisingly fast.

He sometimes pops up at their feet from nowhere while they’re tending vines at the home block of Steels Gate Wines, in Steels Creek, beside Kinglake National Park.

With a few growls, the wombat trained the family’s kelpie, Pippin, to keep her distance, and he now often sleeps in Pippin’s kennel.

But within weeks of first spotting the wombat eating grass under their vines, winery owners Matthew Davis and Brad Atkins, knew something was not right. 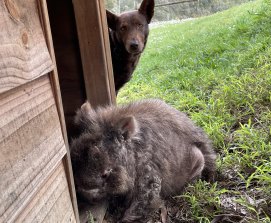 In the following weeks, Ewok — named by their son Sebastian, 10, after the furry Star Wars characters — developed sores and bald patches.

Ewok would be itchy and scratch himself with his claws, or rub against posts, further inflaming his skin and risking infection.

Mange Management, run by volunteers, gave the family one of its free treatment packs for wild wombats suffering from mange.

Once a week for the past six weeks, the Atkins-Davis family have been applying a mite-killing chemical, supplied by the charity, to Ewok’s back.

Ewok’s fur is growing back, and the sores are drying up.

As if he knows he needs a bit more treatment, Ewok is hanging around, and he’s a welcome distraction.

Steels Gate wine sales have dropped by over 90 per-cent on pre-pandemic levels.

The winery is just inside metro Melbourne, so its restaurant and cellar door, in Dixons Creek, couldn’t re-open after regional restrictions eased last week.

Mr Atkins said 18 months ago, he was scared the winery would not survive, but with government grants, online wine sales and serving Friday night restaurant takeaways, “we’ll wiggle our way through until we can open again”.

“If we can be open by November and have a bumper summer, then we’ll be good.”

Mr Davis said when tending the vines with staff, the wombat’s progress has been a fun topic of conversation.

Mr Davis believes that if Ewok wasn’t treated “there would have been a high chance of death”.

]Mr Atkins said: “I feel like Ewok has turned a corner, which is really exciting.”

Sebastian is fond of Ewok, but understands that he is not a pet in the same way as Pippin the dog.
“I know he’s a wild animal,” Sebastian said. “It means he’s not tamed.”

Asked how he would feel if Ewok disappeared into the forest, he said, “I would feel OK”.

Steels Gate Wines are selling an Ewok’s Pack of six bottles of wine for $225, of which $30 each will go to Mange Management, to fund more mange treatment kits.

09/12/2021 World News Comments Off on It’s away with the mange: The winery family who rescued a wombat
Recent Posts