Keran Murphy's life changed forever this year. It was Australia Day and she was by herself in a Melbourne cinema. In the darkness, an irresistible notification lit up her phone.

It was from family heritage site Ancestry, one of the the biggest players in the rapidly-growing market for home DNA test kits: Ms Murphy, 50, had a new message.

The woman at the other end of the message was a stranger. She was also one of four half-sisters Ms Murphy never knew existed.

One of her half-siblings, Julie Kerr, happened to live in Kilsyth. All off them keep in touch.

Ms Murphy, adopted as a child, had sent away her DNA swab last year and made sure to check the online box indicating she was open to receive messages from potential genetic matches. 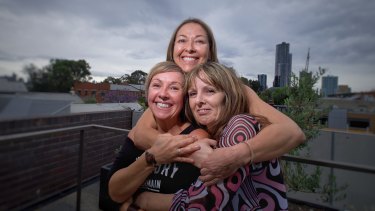 Molly Grossi, Keran Murphy and Julie Kerr discovered they were sisters through a home DNA test, This is the first time all three had been together at the same time.Credit:Luis Enrique Ascui

The subsequent exchange led her to meet her biological father for the first time. She was also able to reconnected with her full sister, Molly Grossi, who she hadn't seen in 13 years. Two half-brothers from her mother's side are out there somewhere, too.

This was a happy story.

But experts said some people embarking on the home DNA journey could find the experience traumatic.

They cautioned people to consider the implications for themselves and family members before gifting one this Christmas: not only because skeletons were at play, but also personal information and, potentially, bad advice.

The hugely popular US company 23andMe, which has more than five million people on its database, can list customers' genetic variants and tell them if they are predisposed to certain illnesses.

Tiffany Boughtwood from Australian Genomics, which researches DNA to create healthcare projects, said the quality of data coming out of unknown labs was not sufficient to form the basis of clinical decisions.

"There is no guarantee the data will be accurate. And if you upload it into a health algorithm and it says you’re going to get Alzheimer's disease or cancer, it can cause great distress to people," she said.

The Therapeutic Goods Administration prohibits the sale of most at-home genetic health-screening kits in Australia, but online sales from existing and emerging international companies has made enforcement difficult.

Some providers like Ancestry and MyHeritage, among an expanding list of others, can provide fascinating, though not completely reliable, breakdowns of ethnicity. You may delight in telling friends you are 10 per cent Viking.

Other services available to Australians claim to read your genes and spit out such information as your tolerance for caffeine, or whether a mediterranean diet might get you looking trim for summer.

"It’s getting huge… and [companies] change from week to week depending on who’s owning them and what they’re offering," said Jacqueline Savard, a lecturer in health ethics and professionalism at Deakin University.

"I think a lot of interest in Australia in testing stems from access. Previously, a lot of companies were based overseas and you couldn’t purchase them without an international address."

Melbourne start-up MyDNA can help customers avoid the trial and error of prescription medications by identifying their genetic makeup.

For a $69.95 kit and monthly $14.95 subscription to its app (some kits cost hundreds of dollars) the company can also provide ongoing insights about what diets and fitness regimes may work best for your genes.

While MyDNA would not provide specific figures, spokesman Josh Wittner said that after modest growth in the first eight of its 12 years, it was now tracking at near 100 per cent year-on-year.

Such tests could be fun and helpful, Ms Boughtwood said, but people should avoid significant assumptions based on home DNA tests alone.

"If I go along and have a test and find I’ve got the fast-twitch ACTN3 gene, it does not mean that I’m going to be a good sprinter," she said.

Mr Wittner said MyDNA did not sell individual or aggregate data – "It's not ours, so therefore we would never share it" – but this is not the same for all companies.

In 2018, pharmaceutical giant GSK announced a $US300 million ($405 million) investment in 23andMe and a deal to harvest data to assist product development. Customers can choose to be de-identified.

"We all know that terms and conditions exist and we hit the accept button, but it's about taking pause and thinking about what this product is telling me," Dr Savard said.

"There has been some strides with this and will try to explain where their company stands, but it’s a developing area."

For Keran Murphy and her new-found family, at least, sending away for DNA home test kits has been among the best decisions of their lives.

The Sunday Age caught up with Keran, Molly and Julie on Saturday in South Yarra. It was the first time all three of them had been in the same room. They were drinking champagne.

"Out of a really tough year has come this really beautiful thing," Molly said.

12/05/2020 World News Comments Off on ‘I’ve got family’: pleasure, pitfalls and the rapid rise of home DNA kits
Recent Posts
We and our partners use cookies on this site to improve our service, perform analytics, personalize advertising, measure advertising performance, and remember website preferences.Ok