EXCLUSIVE: Jamie Theakston is at war with his wealthy neighbours AGAIN – this time over his plans for a garden gym… just months after Heart FM DJ built family home behind his £6.5m London mansion

Jamie Theakston is at war again with his wealthy neighbours after submitting plans to build a state-of-the art gym and office in the back garden of his £6.5 million mansion.

The Heart FM host, 50 wants to construct an outbuilding measuring 43 feet wide and 10 feet high in his large garden, which is located within a conservation area of Chiswick, West London that is home to a number or rich and famous people.

The controversial proposed building would contain a CrossFit style gym with enough space for battle ropes, plyometric box jumps and a sled pushing area to help him stay fit.

It will also be made up of a home office, shower and toilet, wood burning stove and kitchenette.

Relations between Theakston and his well-heeled neighbours are already strained after he was given permission to build a four-bedroom family home at the back of his garden in 2018.

They accused him of ‘cultural vandalism’ and acting out of greed as more than 20 objected to Hounslow Council’s planning department. An historic coach house was demolished to make way for it while a number of trees were also cut down. 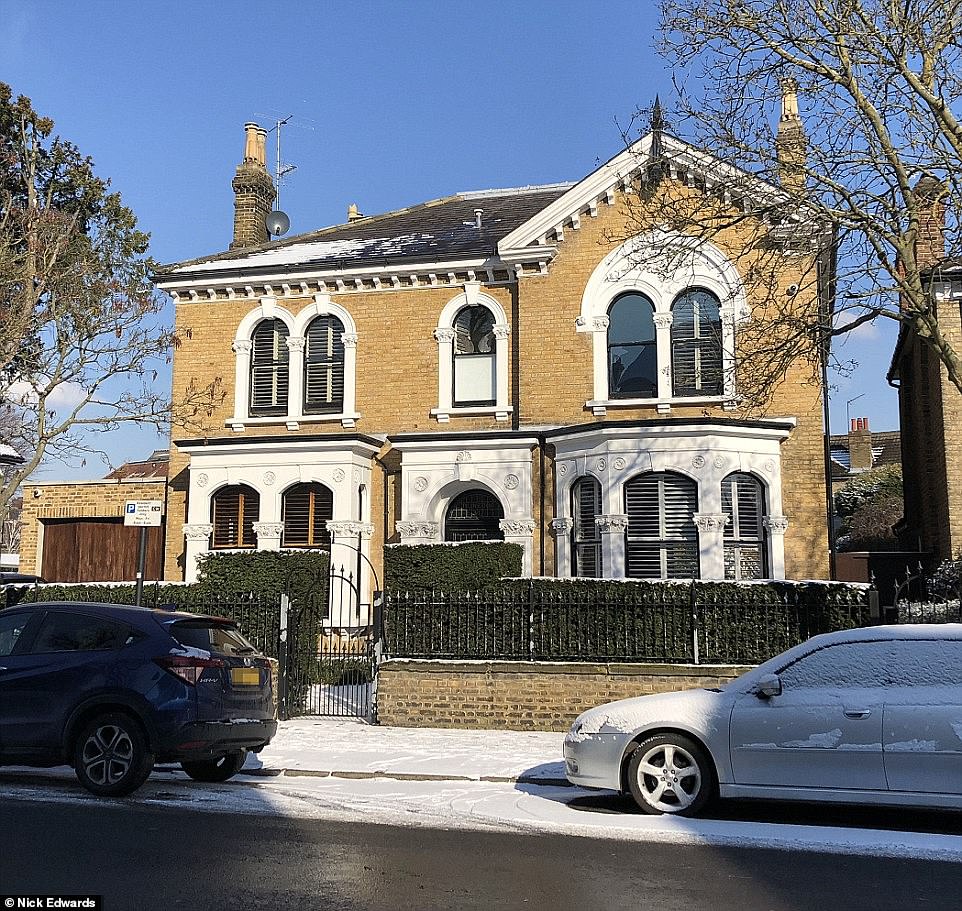 Heart FM host Theakston, 50, bought his stunning five bedroom home in west London for £3.8m in 2010. He spent two years renovating it before it appeared on the TV show ‘Through the Keyhole’

Now he wants to build a state of the art CrossFit-style gym with plans (above) that he has submitted with his local council. The outbuilding will be 43 feet wide and 10 feet high and will be used as an office with a log burner, shower and toilet 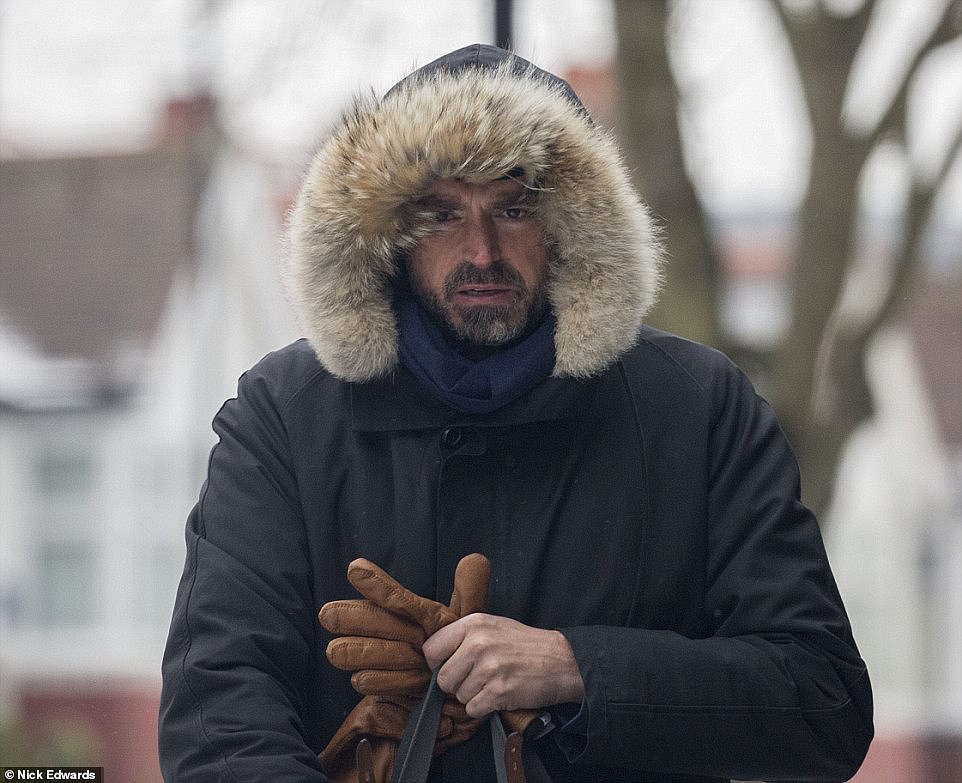 The stylish three-storey property, worth an estimated £3 million was not sold by Theakston and is rented out to a family of four.

Rents in the area for similar homes are around an eye-watering £6,000 per month.

Prior to being given the green light for its construction, Theakston and his wife Sophie lost an earlier bid to build a gym and indoor pool at the back of their garden, which also infuriated neighbours.

But now they are further fuming after his new plans for a gym and office were submitted to Hounslow Council.

One neighbour told MailOnline: ‘This is just the latest problem that we’ve been having with the Theakstons. The plans for this outbuilding are outrageous; it will be an eyesore and a monstrosity.

‘Some homes will see their light and views affected while trees will also have to be chopped down to build it. This is a beautiful conservation area, but Theakston is ruining it and the council is allowing him to. It’s a disgrace.’

Another neighbour added: ‘We are all very angry because the outbuilding proposed by Jamie Theakston does not fit in with the surroundings.

‘The construction of a house in his back garden has caused enough problems. Several trees were chopped down to build it and now more will be felled for this outbuilding.’

A number of neighbours have already submitted their objections to the local authority. 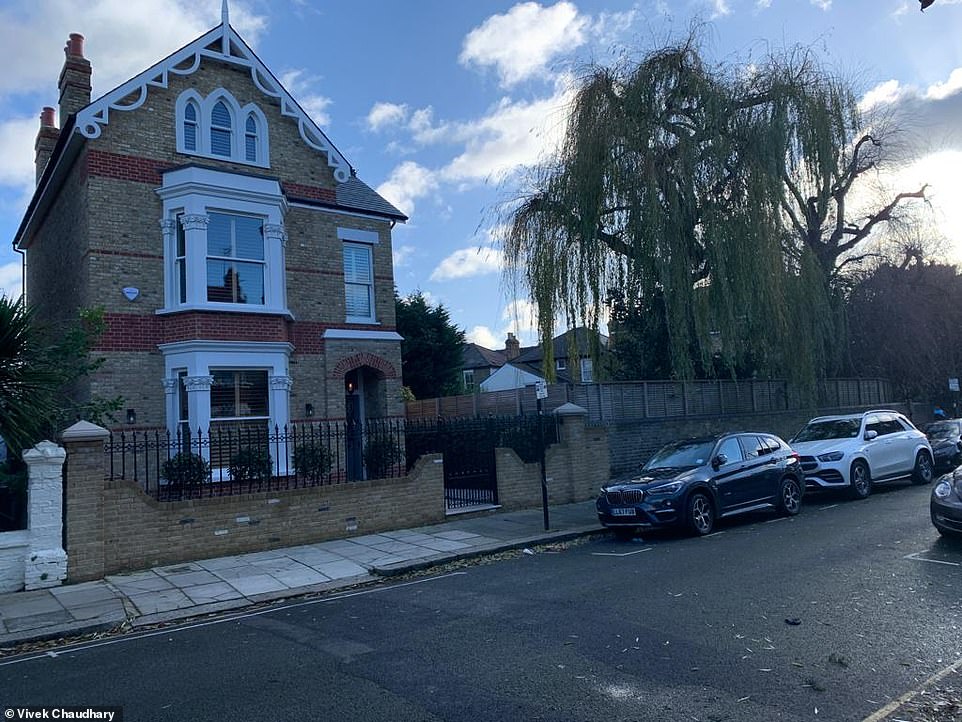 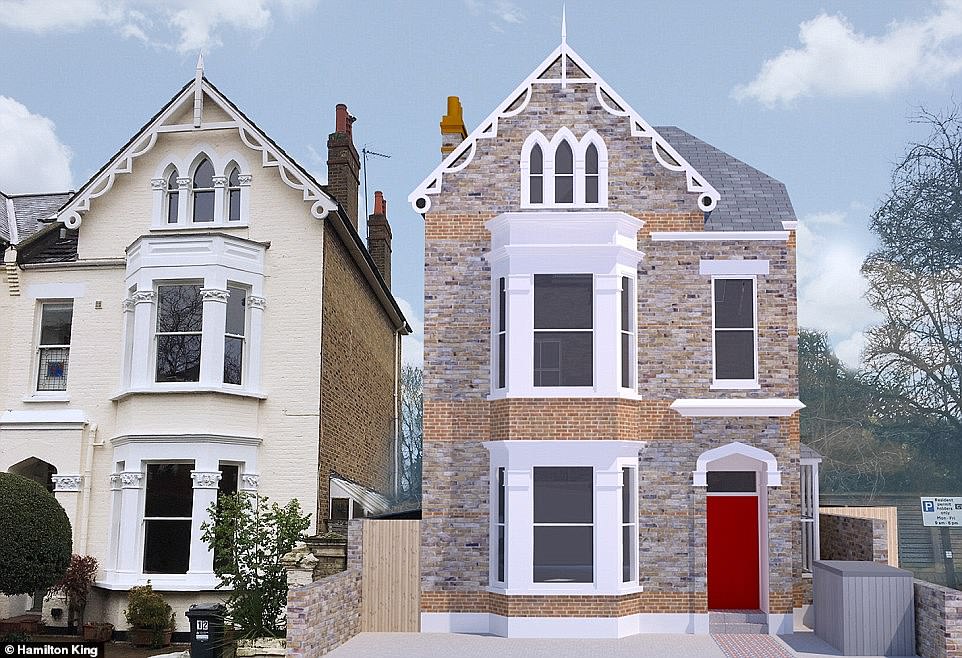 Theakston built it right next door to the home belonging to the son of late film director Sir Richard Attenborough. When he submitted the plans (above) in 2018, Michael Attenborough told MailOnline of his fury at the project 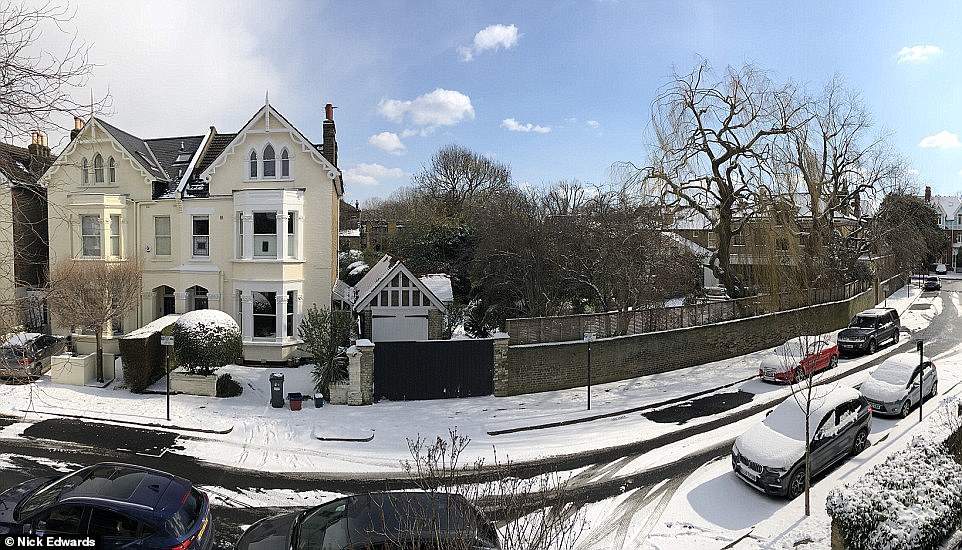 The picture above shows how Theakston’s back garden and Attenborough’s property looked three years ago before building work began on the site. It has been a source of tension between the neighbours ever since

One said: ‘We’re all working together and are determined to stop this. We have been in contact with the council to make our objections clear. Hopefully, they will act with greater force than they did over the issue of the house Theakston built but I don’t have a lot of faith in them.

‘I don’t want to speak about him too much but let’s just say he’s not very popular around here.’

Theakston’s wife Sophie refused to comment on their new proposed outbuilding, telling MailOnline: ‘We are not going to say anything.’ 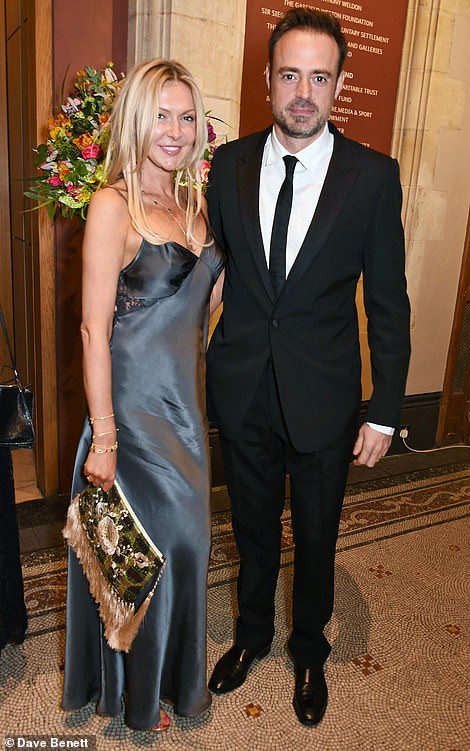 Documents submitted as part of the planning application show that the outbuilding will be rectangular in shape with a long section at the rear cut off ‘to harmonise with the angle of the rear boundary.’ It will have cladding of ‘charred timber.’

A statement reveals that it is not intended as primary living accommodation and will only be used ‘in a manner incidental to the main house.’

The gym is likely to form a key part of Theakston’s fitness regime. Five years ago, the former Live & Kicking presenter lost more than half his body fat after pursuing a punishing exercise programme.

The 2018 row over the house Theakston built at the back of his garden saw him a logger heads with Michael Attenborough, son of late film director Richard, who was most directly affected as it adjoined his semi-detached property.

He said at the time: ‘Mr Theakston has told me his wants to build the house and sell it for as much as possible but I don’t think he has considered the impact on his neighbours.

‘He is doing nothing illegal as the house will be built entirely on his own land, but as his neighbour it will have a huge impact on our home of the last 30 years.

‘If it goes ahead, we will seriously have to consider leaving as it will not be the same here anymore. What I don’t understand is why he moved to a conservation area and then sets about wanting to change things.’

Despite his protests, Mr Attenborough continues to live in his home.

Theakston bought his stunning five-bedroom property that sits on a corner plot for £3.8m in 2010. He shares it with Sophie and their two children. 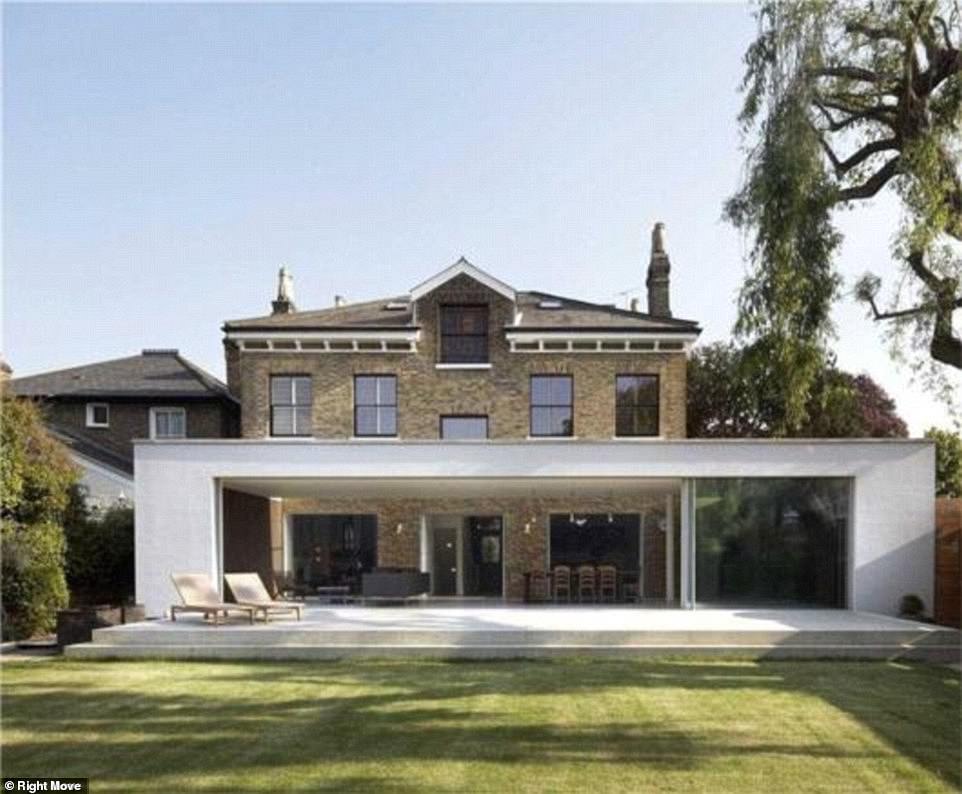 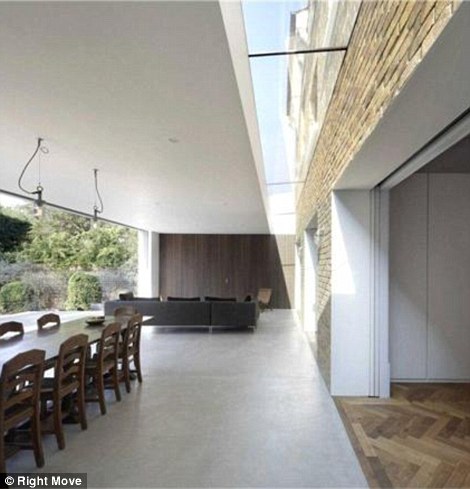 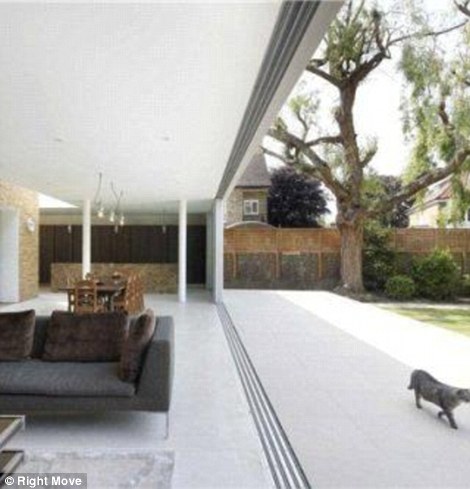 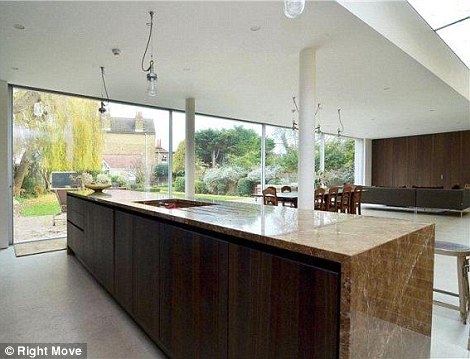 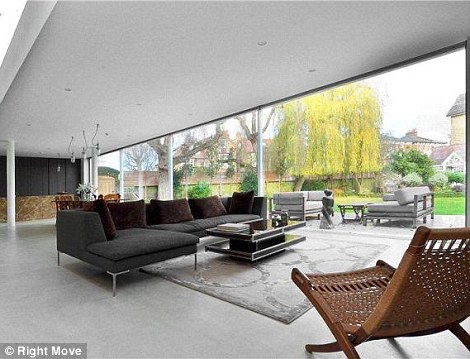 The couple carried out extensive renovation work on their spectacular property before putting it back on the market on 2013 for £6.5million, which would have made it the most expensive house in the area had it sold 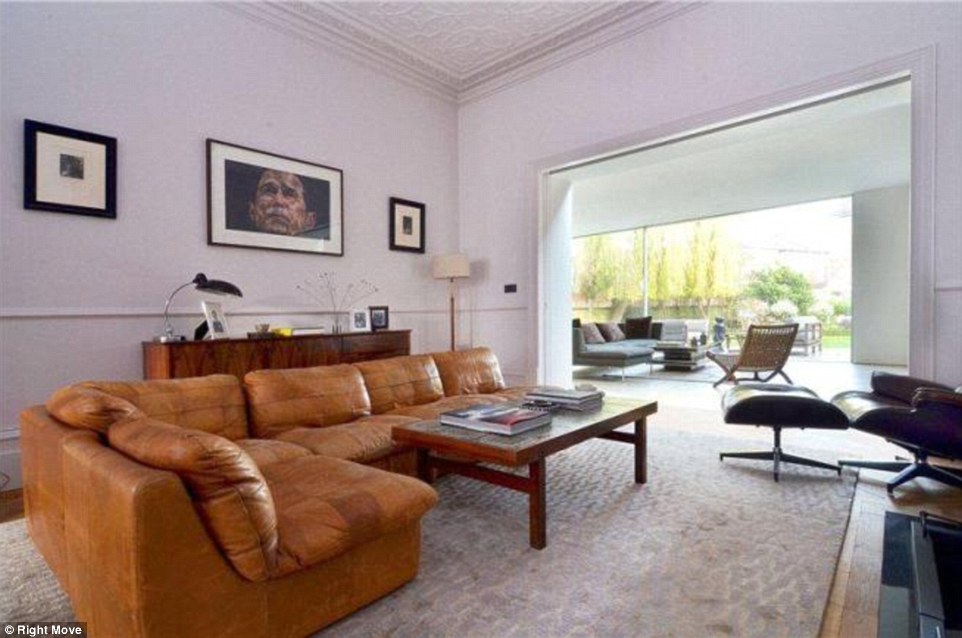 In a 2010 interview the radio personality revealed how he had bought his first home aged 21 in trendy Notting Hill and by his late 30s had traded up by moving four times. Pictured: A living room at the star’s five bedroom, west London home

He undertook a massive renovation project that lasted two years and in 2013 put the double fronted house – which once featured on the TV show ‘Through the Keyhole’ – up for sale at £6.5m.

Had it sold it would have been the most second most expensive house ever sold in Chiswick, about six miles from the centre of London.

With no takers for the house Theakston and Sophie took it off the market.

No date is yet fixed on when a final decision will be made on Theakston’s proposed outbuilding with Hounslow Council saying that it cannot comment on pending planning applications.