Japan’s Defence Minister has warned China is trying to change the status quo in the region by force and has called on Australia and other allies to step up to ensure Beijing’s dominance is not inevitable.

In some of his strongest comments on the deteriorating security situation across the Indo-Pacific, Nobuo Kishi said the shifting power balance between the US and China “has become very conspicuous” while a military battle over Taiwan had “skewed greatly in favour of China”. 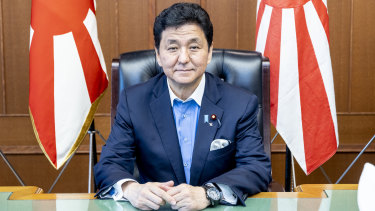 “Japan’s defence policy is not targeted at any specific nation. But given that the security environment surrounding Japan is getting even harsher, we must build a structure where we can protect ourselves,” Kishi told The Sydney Morning Herald and The Age in an interview in his office at the Defence Ministry in Tokyo.

“[China] is trying to change the status quo unilaterally backed by force and coercion. And they’re trying to make it into a fait accompli.”

The 62-year-old younger brother of former prime minister Shinzo Abe said it was up to the Japanese Parliament to decide if the country needed to change its pacifist constitution to meet its security needs.

“For us to be able to respond to those challenges, what we must do is enhance our defence capabilities on our own,” he said.

“There could be a constitutional debate in [Autumn] this year in the national Diet, but this is a matter for the Diet. I will refrain from making such comments.”

Liberal Democratic Party MPs have spent decades arguing for changes to the constitution that would give its self-defence forces greater power to join conflicts in which there is a collective interest. A legislative reinterpretation in 2014 allowed Japan’s military to defend other allies if war was declared upon them, but Abe left office last year without a constitutional legacy and the debate has since been overshadowed by the coronavirus and the Olympics.

Kishi said Tokyo had been paying particularly close attention to the South China Sea and the East China Sea where it has disputed territories with China. He welcomed the arrival of the UK’s Carrier Strike Group and a German frigate in the region but said the military gap between China and Taiwan was growing “year by year”.

China regards the democratic island of Taiwan as a breakaway province that must be united with the mainland by 2049. In a show of force, Beijing has flown more than 300 warplanes towards its neighbour over the past 12 months.

“The defence stability of Taiwan is very important, not just for Japan’s security, but for the stability of the world as well,” said Kishi.

The former executive at Japanese corporate giant Sumitomo, who lived in Melbourne in the early 2000s, said he was counting on Australia to take a leadership role in south-east Asia and the Pacific to counter the influence of China’s Belt and Road initiative.

The Free and Open Indo-Pacific is the Japan-led alternative to the Belt and Road. It has struggled since 2016 to get global traction for its program of quality infrastructure including ports, railways, roads, energy and technology, but got a boost when it was embraced by US President Joe Biden in March.

So far, Japan has done most of the spending and invested more than $258 billion across Thailand, Indonesia, Vietnam and Malaysia.

Tokyo was concerned by a lack of funding for south-east Asia in last year’s Australian federal budget as China escalated its vaccine, infrastructure and economic diplomacy across the region. Canberra has since committed $500 million to ASEAN and a $1.5 billion budget support loan to Indonesia. 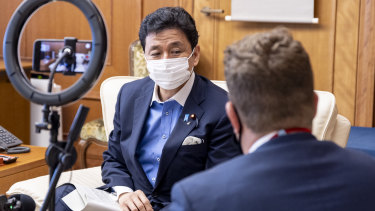 “South-east Asia is an area where we have critical feelings,” said Kishi. “Australia is quite influential in the south-east Asian region as well as over the Pacific Islands.

“So, I would like to expect leadership to be demonstrated by Australia in promoting this vision of a Free and Open Indo-Pacific,” he said, referring to the Japan-led scheme.

Australia has not had any ministerial contact with Beijing for more than 18 months after a series of public disputes over national security, human rights and the coronavirus.

Kishi said the best way to have an honest dialogue with Beijing was to do so directly in private meetings.

“We make use of summit meetings as well as ministerial-level meetings to convey to them frankly what our concerns are one by one and ask them to take concrete action,” he said.

“We have conveyed to them our strong concerns about their behaviour. But at the same time we have a long-standing economic relationship as well as a cultural one on top of military developments.”

Japan’s opposition leader Yukio Edano reaffirmed his bipartisan approach support for Australia in its ongoing dispute with China in a separate interview with this masthead last week.

“He was convalescing, and now has no particular health problems,” he said. “He is currently back in his political activities.”

The comments are likely to fuel speculation over the future of current prime minister Yoshihide Suga who faces approval ratings in the low 30s despite Japan delivering an Olympics in the middle of a pandemic and a record gold medal haul.

“The number one priority or the challenge for the Suga government now is COVID-19 and restoring the economy back,” said Kishi.

A federal election is due by October and the country is grappling to get more than 15,000 coronavirus cases a day under control, despite having less than 500 cases within the Olympic bubble.

“There have been a variety of views in Japan. With this increase in the number of infection cases, there are many people who are critical of the Olympic Games being hosted in Japan,” said Kishi.

“But by organising a safe Olympic Games, we hope that this could lead to people giving credit to the Japanese government.“