‘You don’t have the right to tell my 14-year-old she has to carry a rapist’s baby’: Joe Rogan defends abortion in clash with Babylon Bee CEO who argued that people are ‘born of rape’ all the time, and ‘have a right to live’

Podcaster Joe Rogan brought up his own daughter in a debate over abortion rights on the most recent episode of his show.

The controversial podcaster found himself in a heated argument about abortion rights while speaking with Babylon Bee Founder and CEO Seth Dillon in Tuesday’s episode of The Joe Rogan Experience.

Dillon has long been opposed to abortion, even claiming on Twitter that it is healthcare the same way ‘rape is lovemaking,’ and on Tuesday, he suggested that abortion should not be allowed even in the case of rape.

But Dillon argued: ‘There are people who have been born of rape and are alive right now and are pro-life.

‘They go around speaking and say how “I had a right to live.” They will go around and make a case, and they were born of rape.’

Rogan, though, firmly disagreed, saying: ‘You don’t have the right to tell a 14-year-old girl she has to carry a rapist’s baby. Do you understand what you’re saying?

‘You don’t have the right to tell my 14-year-old daughter she has to carry her rapist’s baby.’

Dillon then replied he does not think ‘two wrongs make a right,’ saying: ‘I don’t think murder fixes a rape.’

Rogan is the father to 14-year-old Lola, whom he shares with his wife Jessica Ditzel, along with their younger daughter, Rosy, 12. He is also the step-father to Ditzel’s older daughter, Kayja Rose, 23, from a previous relationship. 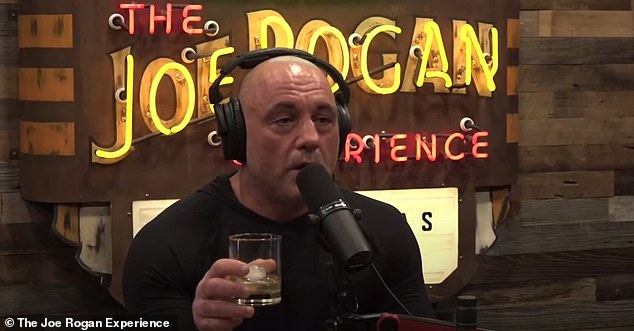 Podcaster Joe Rogan clashed with Babylon Bee Founder Seth Dillon on the issue of abortion rights in Tuesday’s episode of The Joe Rogan Experience, telling Dillon: ‘You don’t have the right to tell my 14-year-old daughter she has to carry her rapist’s baby 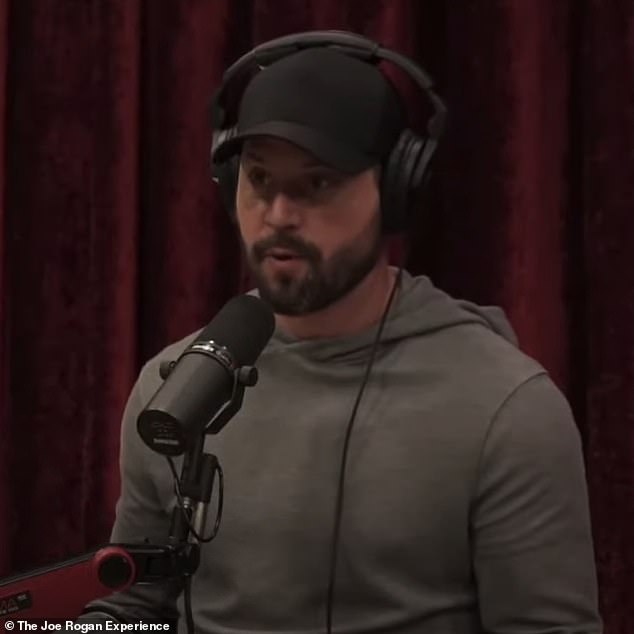 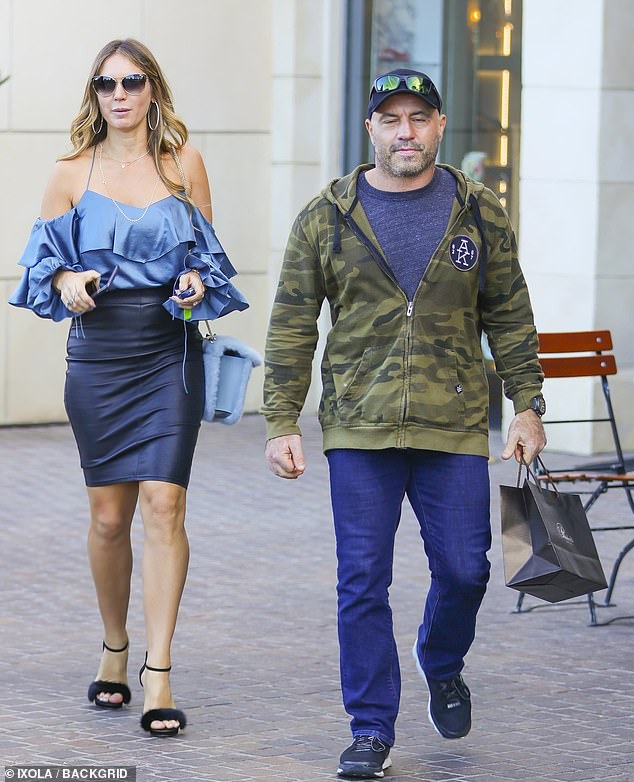 Rogan, right, has a 14-year-old and a 12-year-old daughter with his wife, Jessica Ditzel, left. He is also the step-father to Ditzel’s older daughter, Kayja Rose, 23, from a previous relationship

During the exchange on Tuesday’s episode of The Joe Rogan Experience, Rogan tried to get Dillon to clarify his stance on abortion.

He asked the conservative satire website founder where he stands on early abortions ‘at six weeks, four weeks, three days. What if she just turned positive now, turned positive for pregnancy. What if it just happened today?’

Dillon replied: ‘Once life has begun I don’t think you can draw lines.

He then said he does not think questions of whether the fetus can feel pain or is conscious are relevant.

‘I think if it is a human life, a distinct human life, I think it’s wrong to end it’s life,’ Dillon explained.

That is when Rogan asked Dillon when he thinks life begins. ‘Do you think that once the conception happens, there’s some sort of a miraculous event? Like you could literally get to the point where the sperm cracks the egg. If you could scoop that egg out right there — would that be abortion?’

‘Well I mean at some point you’re going to have to say there was a magic moment that happened because you believe that we eventually become valuable humans, right?’ Dillon responded.

He went on to say he thinks it is ‘harmful misinformation’ to call a fetus ‘a clump of cells because then you’re encouraging people to kill it like it’s nothing when it’s actually a human life. It’s a developing human life.’

That is when he made his controversial argument: ‘I think abortion is health care the way rape is love making, if we want to use rape as an example. I think they’re opposites, and these are euphemisms that we use.

‘You know, we use the word “healthcare;” we’re talking about a procedure that ends an innocent human life and we’re calling it “healthcare.”‘

At that point, Rogan conceded: ‘This is why it’s such a human issue, because I see what you’re saying.

‘Life is valuable, yes, and people were almost the victim of abortion and they weren’t, they went on to become these amazing people and we would have lost them.’

The exchange was shared to Twitter by pro-life activist Lila Rose, who tweeted to Joe Rogan: ‘I think we would find a lot of common ground on protecting families, fighting censorship, and pursuing a meaningful life.’

The exchange was shared to Twitter by pro-life activist Lila Rose, who tweeted to Joe Rogan that she thinks they can find some common ground

Rogan has previously discussed his support for abortion rights on his show, bringing up the issue after a Supreme Court draft memo leaked earlier this year suggesting the high court would overturn Roe v Wade, which granted abortion rights.

‘I don’t like people telling other people what they can and can’t do,’ he said on the May 4 episode.

Still, he acknowledged it’s a complicated issue as he spoke about when the cut off period for an abortion should be.

‘It gets weird when the baby gets like six months old,’ he noted.

‘I know that some states have late-term abortions and sometimes you need one for medical reasons, right? The woman could die if she gives birth. Like it’s a decision that people have to make.

‘I am 100 percent for a woman’s right to choose,’ Rogan said at the time. ‘But as a human being, just a person observing things, there’s a big difference between a little clump of cells and a fetus with the eyeball and the beating heart.’

Meanwhile, Dillon has long spoken out against abortion rights, claiming it is murder.

In a September 2021 Twitter thread, he tried to refute pro-abortion arguments as he made the assertion that ‘abortion is healthcare the way rape is lovemaking.’

He said that ‘there have always been limits to autonomy — and that’s especially ture for parents. They should never neglect or harm their children in the name of autonomy.’

And on the issue of when life begins, he suggested ‘we should exercise extreme caution and err on the side of life to avoid any chance of killing an innocent, living human?’

Dillon also questioned in the thread what the fetus’ ability to survive outside the womb has ‘to do with one’s humanity or worth,’ and declared: ‘It’s better to be poor than dead.’

He then suggested women who are considering abortion put their child up for adoption, which, he said ‘allows you to place your child with a loving, financially stable family instead of killing him or her.’ 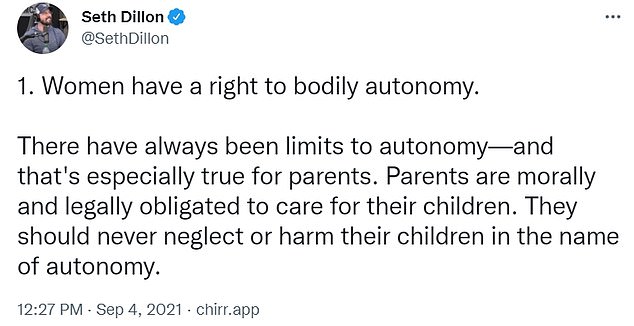 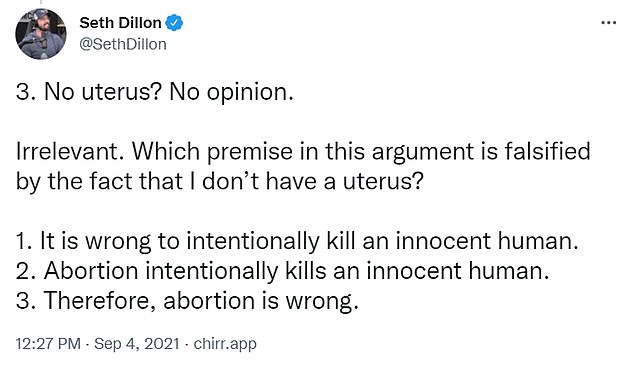 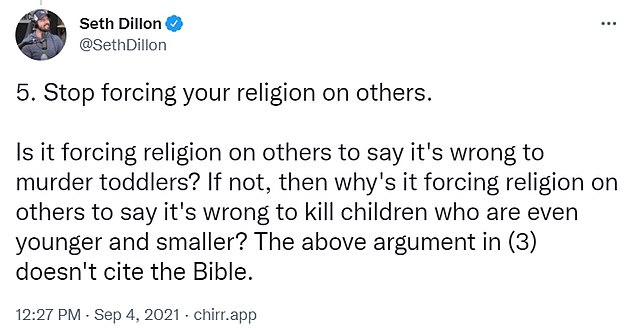 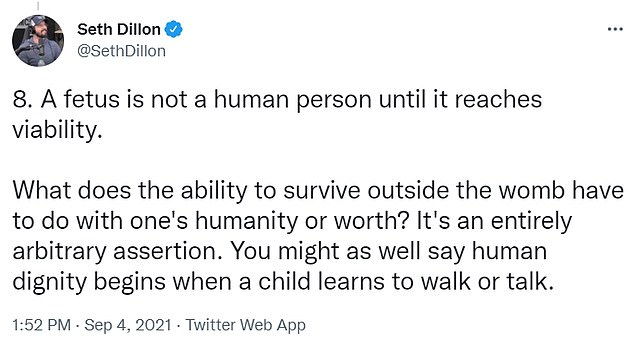 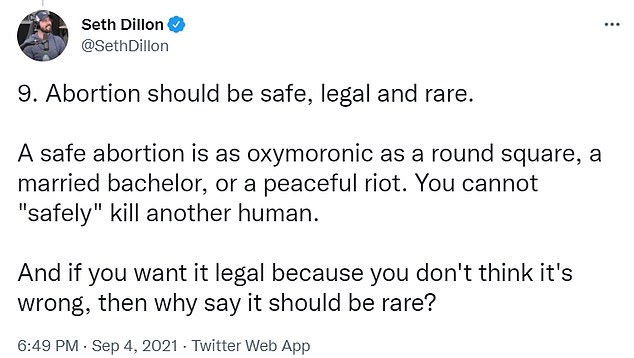 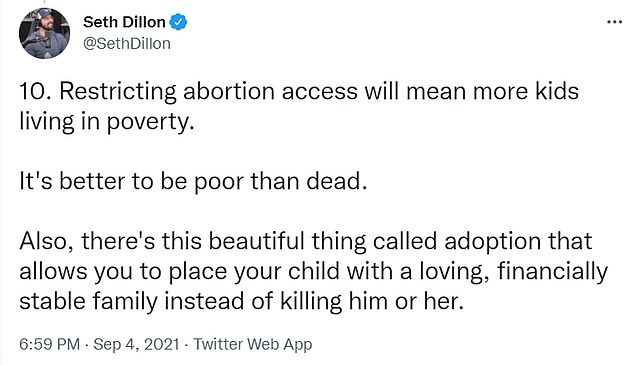 In a September 2021 Twitter thread, Dillon tried to refute arguments in favor of abortion

Abortion rights have been a major concern in the United States since the Supreme Court voted to overturn its landmark Roe v Wade decision giving women the right to an abortion nationwide.

As a result, each state could now decide whether to allow abortion.

The ruling stated: ‘Like the infamous decision in Plessy v. Ferguson, Roe was also egregiously wrong and on a collision course with the Constitution from the day it was decided.

‘Those on the losing side – those who sought to advance the State’s interest in fetal life – could no longer seek to persuade their elected representatives to adopt policies consistent with their views.’

‘The Court short-circuited the democratic process by closing it to the large number of Americans who disagreed with Roe,’ the ruling added.

In the aftermath, protests erupted throughout the country – with some abortion rights activists even descending on the justices’ homes.

Outside of the Virginia home of Justice Alito, protesters chanted ‘abort the court,’ as they marched up and down his street in Alexandria, lit candles and shouted slogans like ‘Alito is a coward,’ and ‘our bodies, our choice.’

And outside of Thomas’s Virginia home, a crowd of several dozen people waved placards, drummed and waved flags.

As those protests continued on the justices’ property, lawmakers met to consider a bill protecting the Supreme Court justices from any harm, and then-White House Press Secretary Jen Psaki condemned the ‘violence, threats, or vandalism.

‘Judges perform an incredibly important function in our society, and they must be able to do their jobs without concern for their personal safety,’ she tweeted.