I’d rather be back in jail with Noel the Razor than sit with the second-raters in today’s House of Commons, writes JONATHAN AITKEN 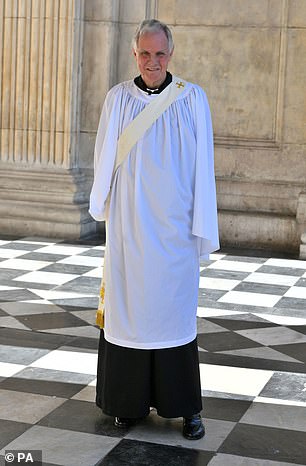 Former MP and convict, and now ordained chaplin, Jonathan Aitken says he would prefer to be in prison than in Westminster

The present political atmosphere is poisonously unpleasant. Pessimism rules. The problems of both of our two major parties look close to insoluble. Remainers and Brexiteers are at daggers drawn, to the point where either leaving or staying in the EU may both be missions impossible. What a mess!

Perhaps it’s an indication of the state we’re in that the view from a jail cell seems so relevant now.

Twenty years ago this week, I was starting my 18-month sentence for perjury. My life was worse than a mess. I had hit rock-bottom after plunging down a self-created vortex of defeat, disgrace, divorce, bankruptcy and jail. Yet somewhere deep inside me I knew that all was not quite lost.

Britain is not completely lost, either. The values and virtues of our national character are still remarkably strong, as are many of our institutions and achievements. Even current economic and employment figures are good.

Today’s crisis is all too real, however. Panic is rippling through the demoralised ranks of the political classes. Her Majesty’s Opposition is mired in allegations of anti-Semitism, while the process of electing a Conservative leader and new Prime Minister has become an absurd free-for-all.

When, recently, I was asked if I would like to be back in politics, I replied: ‘No, I would rather be back in a cell at Belmarsh Prison than back in today’s House of Commons!’

I had meant it as a joke. The audience laughed. But humour often contains truth and, on reflection, I was making a serious point.

To achieve the kind of turnaround we need requires a momentous journey of change, a massive shift of personalities and the painful acceptance of sweeping reforms.

Too many of today’s politicians are in denial. It is time to face reality. Let’s start with the personalities. The political stage has shrunk and so have many of its actors.

When I became an MP in 1974, the House of Commons was filled with men and women who had achieved success before entering Parliament. Several senior colleagues had fought for their country in the war.

Almost a third of MPs continued, as backbenchers, to pursue their previous careers on a part-time basis, whether they were QCs, doctors, solicitors, company directors, entrepreneurs, small-business owners, skilled craftsmen or trade union officials. 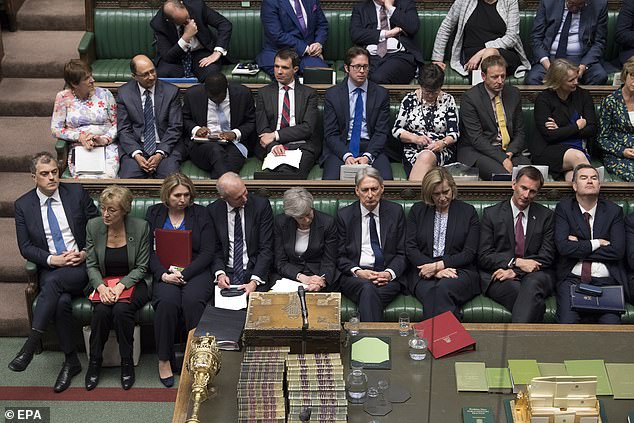 In this way, they brought much wisdom and experience into the Commons, yet they were driven out when ‘having outside interests’ became a form of denigration in the 1990s.

Surely the House of Commons should not consist exclusively of 650 MPs who get out of bed every morning asking themselves: ‘What should I do politically today?’ A mixture of full- and part-time politicians with their feet in the real world would create a far better legislature.

Then there has been the tendency among far too many MPs of all parties to climb into Westminster by what used to be called the ‘office boy’ ladder. I mean the ever-expanding army of political gofers, staffers, researchers, PR consultants, aides to MPs, special advisers to Ministers and so on. These junior political classes, all paid for by the taxpayer, have steadily morphed into the senior political classes.

Short of experience, they are also short of independent judgment and character. They are terrified at the prospect of losing their seats because so many are unemployable in the real world. A career in Parliament, which should be an exciting vocation for first-rate people, has slowly deteriorated into a cushy billet for second-raters. 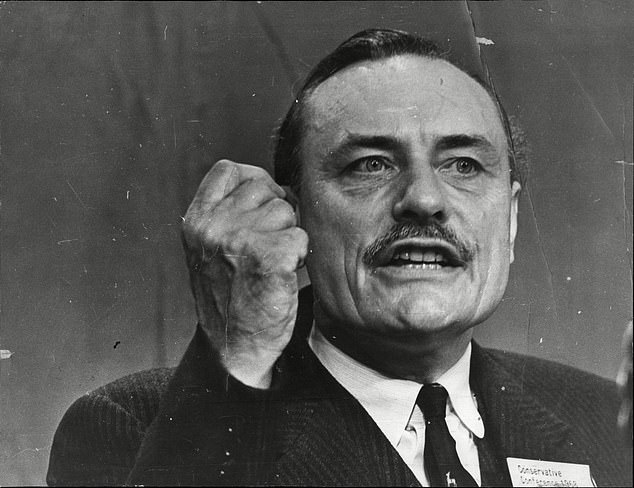 Aitken said he used to be spellbound when listening to MPs such as Enoch Powell, but there are no equivalents today

Modern parliamentarians work shorter hours. Who nowadays hears of late-night, let alone all-night, sittings? Lengthy debates have no great merit in themselves, but can be essential for proper scrutiny of legislation. Abysmally low attendance in the chamber prevents new MPs from learning their trade.

As a young backbencher I used to listen spellbound to giants of oratory like Michael Foot, Enoch Powell, Tony Benn, Jo Grimond and one Deputy Opposition Treasury spokesman, Margaret Thatcher, going head-to-head with Chancellor Denis Healey on the Finance Bill. Where are their equivalents today?

It is not just the politicians who should be criticised for devaluing the currency of public life.

Until the last years of the 20th Century, to climb the greasy pole of promotion, you had to show gravitas. Parliamentary speeches were seriously reported and analysed.

Radio and TV interviews were grillings, not sneerings. Just compare memories of Brian Walden and Robin Day roasting Cabinet Ministers on a slowly turning spit with the superficial disdain of Jeremy Paxman or the multi-interruption style of John Humphrys.

Lightweights climb swiftly at Westminster when experience is at a discount and slick self-presentation is at a premium. 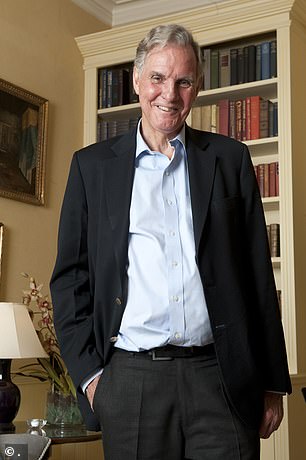 Aitken received an 18-month prison sentence in 1999 for perjury

‘He rose without a trace’ was an unfair jibe applied to David Frost in his meteoric youth. Yet it is a cap which fits at least half the crowded field of Conservative aspirants who have declared themselves as runners in the race for No 10. Come off it! How can there possibly be 12 (so far) serious candidates for Prime Minister?

This contest is degenerating into the farce of an Alice In Wonderland dodo race where even the extinct must have prizes.

It is a symbol of our national political decline that so many who have achieved so little should now be striving for the highest office.

Margaret Thatcher learned these lines by Longfellow in her childhood and repeated them often:

The heights by great men reached and kept were not attained by sudden flight,

But they, while their companions slept, were toiling upward in the night.

‘Toiling upward in the night’ is one essential ingredient of serious politics. But industry alone is insufficient unless accompanied by character, vision and patriotism.

How do we square such qualities with the anti-Semitism infecting the Labour Party? The Labour that I knew and respected would never have given an inch to it.

Jeremy Corbyn, a fair and decent backbench Left-winger throughout our 14 years together in the House, must make his deeds match his words and eradicate this poison from his party.

As for Brexit, we should be grateful to Nigel Farage for the wake-up call he has given the political establishment. Whether we are Leavers or Remainers, it should be a matter of national honour for Parliament to keep faith with the British people’s vote. How to do this is the greatest challenge serious politicians now face. I question whether our MPs are up to it. 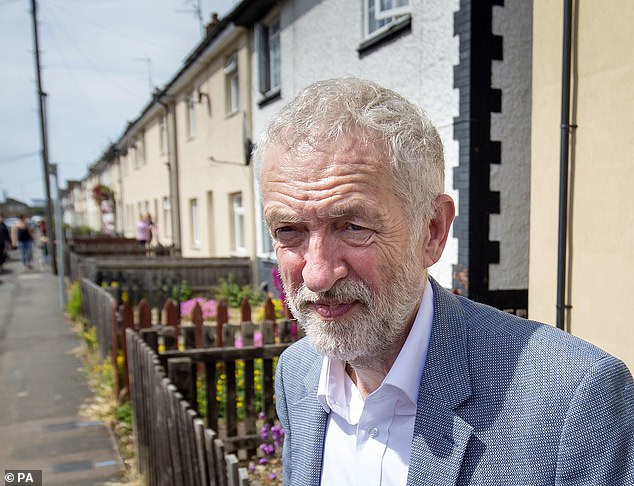 WAKING up in Belmarsh Prison was my very lowest point. I was housed on a wing nicknamed ‘Beirut’ because of its violent inhabitants, while the cell next door contained a career criminal called Noel ‘Razor’ Smith, who later described my demeanour as ‘like a hamstrung lamb surrounded by hungry wolves’.

It was essential for me to move on from the doldrums of denial and chart a new course – and this is also true for our politicians. Radical change is required.

Ideals proved vital. The concept of a life of service had always inspired me, so I started to look for opportunities. I wrote letters for fellow prisoners with poor literacy skills. I became the wing’s cleaner, the best job in a jail because you are a sort of concierge and father confessor in between scrubbing duties with the Harpic. I became chums with Noel, who would later change course and become a successful author and editor.

After my release, I threw myself into charity work. Then, in an interesting career change, I spent two years studying theology and seeking God. Now I am an ordained prison chaplain at Pentonville, a tough nick with huge challenges. I love my pastoral work there because I have found a calling far greater than myself.

I still see enough of present and former parliamentary friends to know that some of them are talented idealists who are fully capable of serving and leading our country.

But to reach those heights, they may need to stay a little longer in today’s depths, have the humility to sort out Brexit through sensible compromises, and dedicate themselves to public service – the true vocation of politicians.

06/02/2019 World News Comments Off on JONATHAN AITKEN: I’d rather be back in jail than be in Westminster
Recent Posts