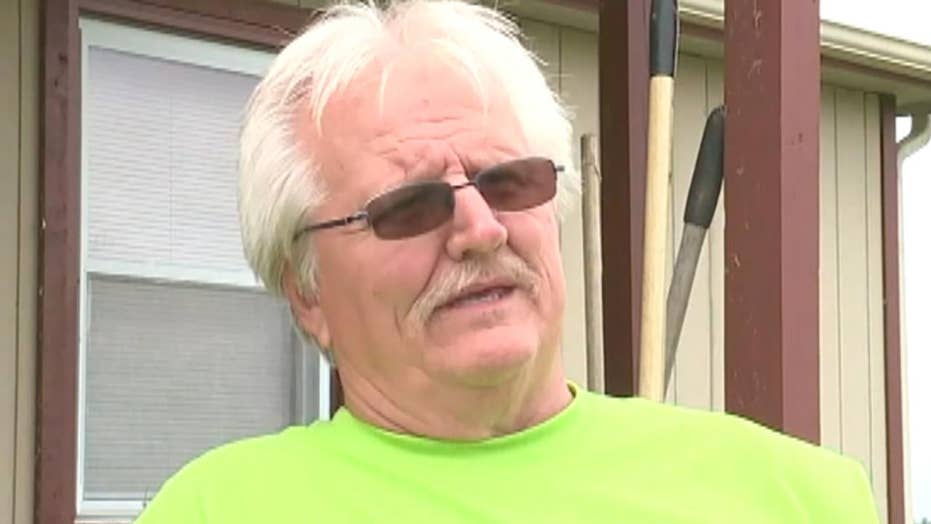 Dennie Roberts, who lost his wife in a 2003 tornado, had his home damaged Tuesday when an EF-4 tornado roared through Linwood, Kansas.

A Kansas man who suffered a devastating loss in a tornado more than a decade ago found himself this week picking up the pieces after a massive twister affected his life this week, once again.

The National Weather Service said Wednesday the twister that roared through an area west of Kansas City earlier this week was an EF-4 tornado with peak winds of 170 mph.

The tornado was part of a severe system that moved through the region, causing 18 injuries and damaging homes, trees and power lines in Douglas, Leavenworth and Wyandotte counties.

TORNADO, SEVERE WEATHER OUTBREAK MOST 'PROLONGED STRETCH' IN 8 YEARS — AND HERE'S WHY

Meteorologists report the tornado was on the ground for about an hour, leaving a 25 mile wide path of destruction in its wake.

One of those homes in the town of Linwood, Kansas belonged to Dennie Roberts, who had time to prepare and take cover.

"It didn't sound like a train, it sounded like a plane. Even the pressure, you know, like when you start to take off. I felt all of that,” Roberts told FOX4. “Then I went downstairs and got me a chair and sat underneath the stairway and told the good Lord I don't want to go, but if you are after me, I am ready.”

The NWS said on Twitter the tornado developed southwest of the college town of Lawrence as an EF-3 storm and strengthened as it moved northeast. The tornado was on the ground for almost 32 miles and was a mile wide at its largest.

The twister took a similar path to the tornado on May 4, 2003 that tore through the Kansas City metro area. That storm unleashed winds over 200 mph, killing two people and leaving more than 50 injured, according to FOX4.

10 DEADLIEST US TORNADOES ON RECORD

Among the dead 16 years ago in Kansas City, Kan. was Roberts’ wife, Sherry. She was seriously injured when the twister struck and died months later in the hospital from her injuries. 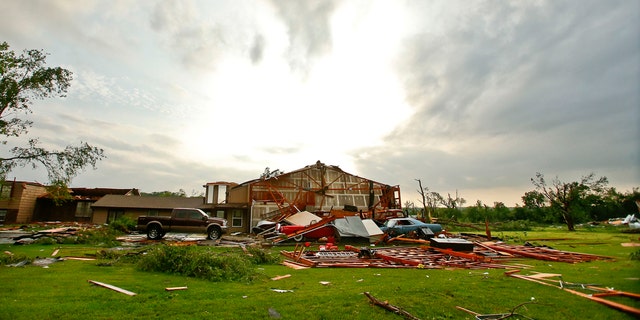 The sky begins to clear over a destroyed home after a tornado touched down in a neighborhood south of Lawrence, Kan., near US-59 highway and N. 1000 Road on Tuesday, May 28, 2019.
(Chris Neal/The Topeka Capital-Journal via AP)

“She said she remembered being up there flying around in it for a little bit," Roberts told FOX4 of his wife's recollections from inside the twister.  He said the pressure "knocked her out" before she was found underneath the debris.

“Five and a half months later, the good Lord went ahead and took her, I think to just get her out of her pain,” Roberts told FOX4.

This time around, Roberts house sustained some damage, but he made it out alive. A classic Ford truck he named "Clyde" also made it out of a collapsed building with just some " dings and dents," according to Roberts. 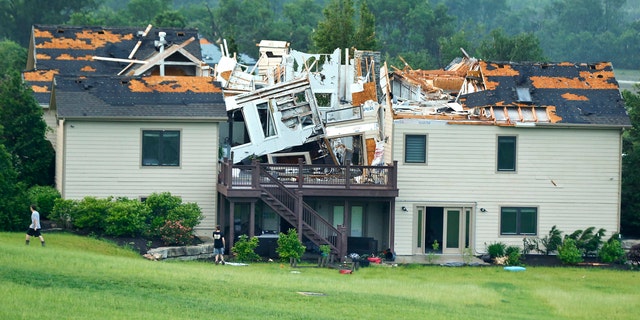 A destroyed home sits in a neighborhood after it was hit by a tornado on Tuesday, May 28, 2019, south of Lawrence, Kan., near US-59 highway and N. 1000 Road.
(Chris Neal/The Topeka Capital-Journal via AP)

"We will get her back together," he told FOX4.