The man who’s eaten ONLY raw meat for 10 years: Kentucky father insists his diet is healthy and gives his four children uncooked meat as well

A man who has eaten nothing but raw meat for almost a decade and even feasts on rotten flesh says he has never felt healthier.

Eating everything from sheep’s stomach smoothies to animal spleen, liver and testicles, Derek Nance lives off a diet almost entirely made up of raw meat.

The 35-year-old self-confessed carnivore from Lexington, Kentucky, says the only parts of an animal he will not eat are the hooves and horns.

Nance has followed his caveman-style diet for close to 10 years and the father-of four, who maintains eating raw meat is safe, even feeds his children the same diet.

But his partner, Joanne Prosser, who used to be a vegetarian, still won’t eat raw meat.

Perhaps the most unusual part of Nance’s diet is ‘high meat’, which is essentially rotten animal flesh. 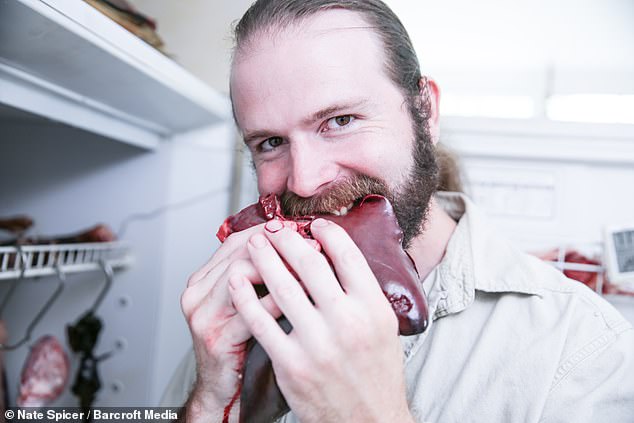 Derek Nance tucking into raw meat at home in Lexington, Kentucky. The carnivore has eaten nothing but raw meat in the last 10 years 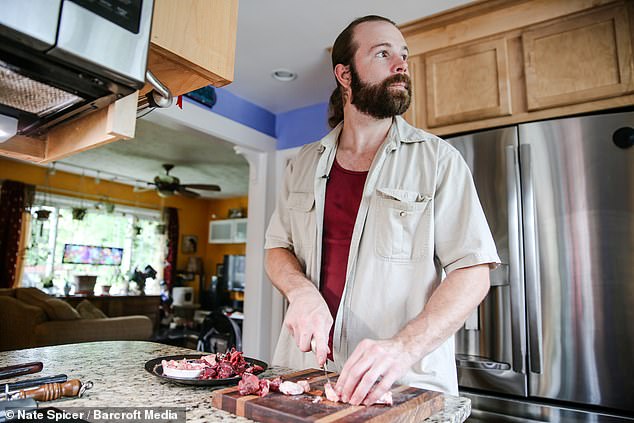 Nance even makes smoothies out of the sheep’s stomach, which he’ll eat as a quick on-the-go snack and feasts on rotten flesh

Fermented flesh releases certain bacteria that give a sense of euphoria when consumed, hence the nickname ‘high meat’.

He even makes smoothies out of the sheep’s stomach, which he’ll eat as a quick on-the-go snack.

Nance told how he even eats decomposed flesh and how it is part of a ‘healthy diet’.

He said: ‘Whenever I get a fresh animal in, there’s something about the fresh blood that just stimulates appetite.

‘Decomposed flesh is a part of a natural diet of almost every predator on this planet. There’s plenty of animals that you can see that scavenge.’

Every month Nance drives out to organic family farms, choosing live animals to slaughter and butcher himself.

Nance said: ‘A full-grown sheep, around 175 pounds or so, will last about a month.’

Eating every part of the animal ‘from head to tail’, Nance claims this adds variety to a diet that could otherwise seem bland. 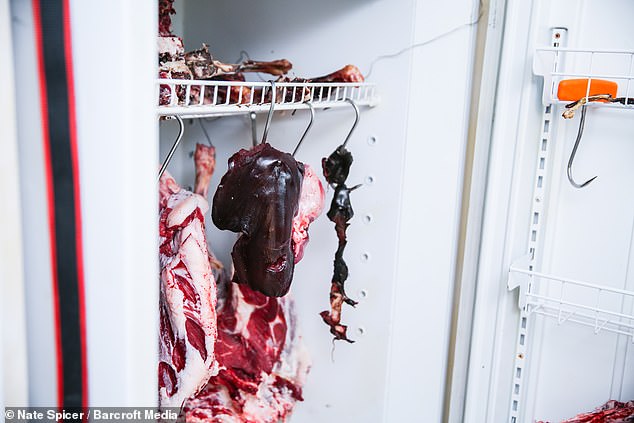 As part of his diet, Nance also eats live maggots, as they have beneficial enzymes that help him digest the large amounts of raw meat he eats 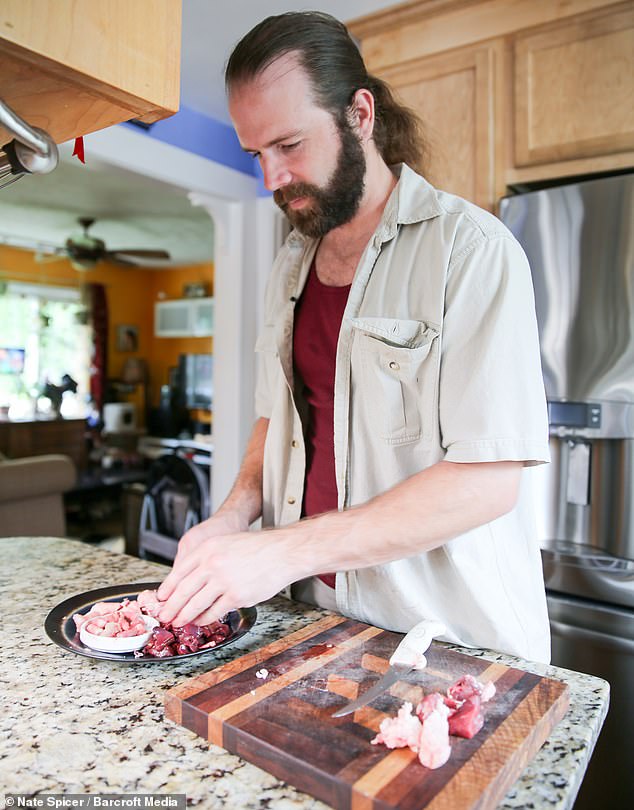 Nance’s diet also includes what is known as ‘high meat’, which is essentially rotten animal flesh 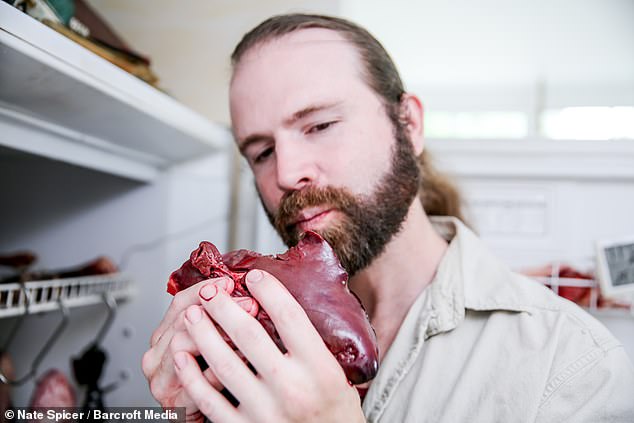 As part of his diet, Nance also eats live maggots, as the flesh-eating critters hold beneficial enzymes that help him digest the large amounts of raw meat he eats.

Nance claims his diet has barely any adverse effects on his health – the only time he fell ill with bad food poisoning was when he ate a week-old raw chicken.

He also maintains that it’s perfectly safe to feed raw meat to children, as long as the meat comes from a clean and healthy animal.

Nance said: ‘I believe that the nourishment that are in raw animal foods is far superior than the baby foods.’

By not cooking the meat, Nance ensures that he is getting all the nutrients he needs to stay healthy.

He explained: ‘There are certain nutrients that are in raw flesh that get cooked out – there’s trace amounts of vitamin C, the vitamin A and the B vitamins.’

Nance’s partner Joann Prosser, 60, was a vegetarian for over 20 years before getting to know Derek.

Although she is now an omnivore, she says she will never try high meat, although she acknowledges it has environmental benefits.

She said: ‘I can never get past the smell. I think that the way Nance harvests meat is much more ethical than buying it from a grocery store.’ 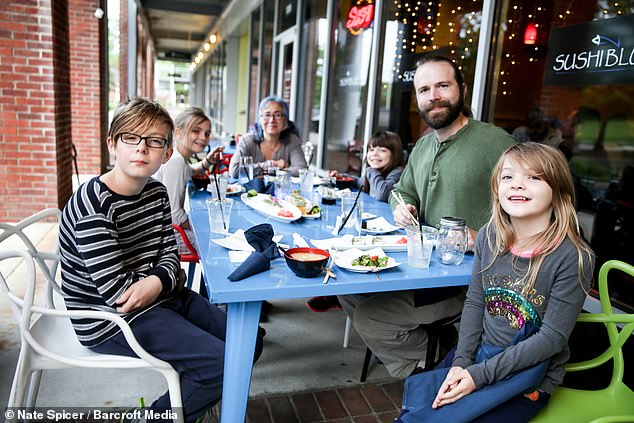 Derek Nance out for dinner with his four children and partner Joanne Posser. Nance maintains it’s safe to feed raw meat to children, as long as it comes from a clean and healthy animal 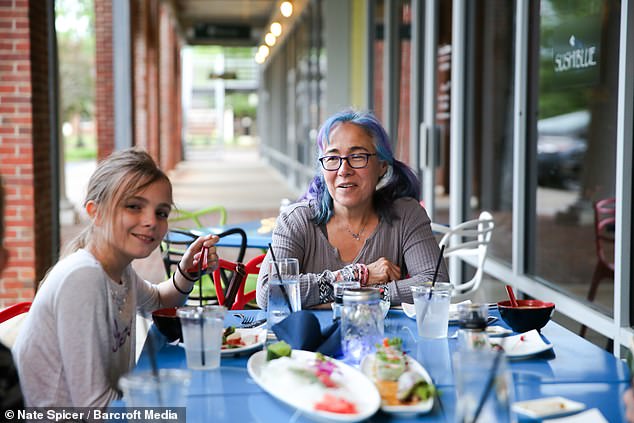 Now used to Nance’s eating habits, Joann admits Derek’s preparation methods can still be too much for her to handle.

Joann said: ‘Whenever he gets the brain out, sometimes I’ll say, ”Please crack that head open outside”. I never imagined I would be saying that to anybody.’

Nance’s four children have all tried raw meat, but have contrasting opinions about it – his older son Aldous says, ‘anyone would think it’s pretty strange’, while younger sister Maddie thinks it’s, ‘cool’.

Growing up with numerous food allergies and intolerances, Nance was forced to find an alternative, eventually settling on his extreme diet.

He said: ‘I was experimenting with so many different diets and nothing seemed to work.’

After years of trying different things he came across the Weston A. Price Foundation’s studies on the diets of the Inuit and Native Americans.

He said: ‘I was having so much trouble digesting everything else that meat seemed to work well for me.’

It all started when Nance decided to butcher two pygmy goats he was keeping for dairy.

He said: ‘It got to the point in winter time where I couldn’t afford to buy hay for them and they were just really loud and annoying, and you could only get a couple of pints of milk out of them.’

Initially experimenting with only eating around two pounds of goat per day, Nance was surprised at how much better he felt.

Nance now hopes to follow the raw meat diet for the rest of his life.

He said: ‘I’ve invested 10 years in it and now I’m really curious to see how far I can push it.

‘If I could live to be 80 years old, then it would validate a lot of the theories that I have about this diet.’