London: Like Brexit, Theresa May's departure is a promise, an argument and a competition – but not yet a reality.

Q: Hang on, didn't she resign two weeks ago?

Yeah but no.  On the morning of Friday May 24, having been persuaded she had no chance at getting her Brexit deal through Parliament, May stood at the lectern in Downing Street choking back emotion.

"I am today announcing that I will resign as leader of the Conservative and Unionist Party on Friday 7 June so that a successor can be chosen," she said. 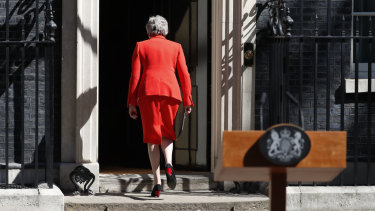 British Prime Minister Theresa May walks away after making a speech in the street outside 10 Downing Street.Credit:AP / Alastair Grant

She was expected to go through with that promise.

Q: So if she isn't party leader after June 7, she's not prime minister?

In short: it's up to the Queen.

Her Majesty chooses a prime minister to lead her government based on an assessment of (and advice on) who commands the confidence of the House of Commons. The Queen alone has the power to change that choice.

So until the Queen chooses a new PM, May is still it.

In practice, usually a PM won't visit the Queen to resign until there's an obvious replacement. 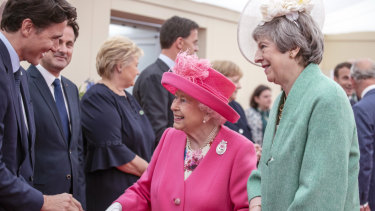 Q: But will she be a real prime minister?

The government and civil service can do what they always do, there is no new limit on their powers.

By convention, May will be expected not to make any dramatic decisions, set any new policy or try to pass any controversial legislation.

She is said to have an eye to her legacy, though. She might try to get something done.

Q: So when will she actually go? 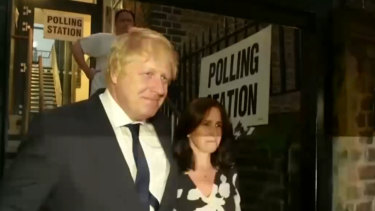 Boris Johnson is said to be the person mostly likely to replace Theresa May.Credit:ninevms

The Conservative Party has a fiddly process to pick its new leader. To cut a long story short, there will be a series of ballots of Tory MPs between now and June 20 to winnow the (currently huge) field down to two candidates.

Party members will then send in postal votes to pick the winner, to be announced in the week beginning July 22.

Q: And will May go then?

Remember, the Queen has to pick a replacement PM who has the confidence of the House of Commons. And in order to not put the Queen in a constitutional pickle, it's May's duty to make sure her replacement has that confidence.

So if May's replacement as Conservative party leader is a rather controversial choice who can't find the numbers in the Commons (May ruled a minority government with the support of the Northern Irish DUP) then there might be a general election instead – or at least a period of negotiation.

In which case May might linger as caretaker PM just a bit longer.